MEETING    At the Strathaven Shopping Centre Car Park in Suffolk Road at 0800hours to finalize the sharing of transport if required.  Cars left behind will be parked safely at the house of Ken Thornton, 39 Suffolk Road, a few blocks further on.

DEPARTURE  Cars will leave from 0830 hours onwards at two minute intervals after receiving the Route question Sheets – note – general and observation questions only.  There is a trophy for the winning Society team and three prizes, the first being a dinner for two at the Acropolis, to be won by the participants. Phone Mienkie Weeks on 50055 for more details.

Sunday August 16th :   This month we will be joining our Chegutu members on an outing to Serui Drift Farm, Mr. Brymer, which is situated at the confluence of the Serui and the Mupfure rivers.  We have I the past visited both rivers but at other locations and found the vegetation diverse and unusual, and so expect a stimulating experience where the two rivers meet.  Ann Bianchi reports that their preliminary recce yielded some strange specimens.

Sunday August 2nd :  We will go to Claremont, to the farm of Mr. and Mrs. Roy Mitchell.  Meet at 830 hours outside the Hotel Rio.  Bring lunch.

On Sunday July 5th we went to Emetsheni, Burnside, 8 Chapman Road, guided by Mrs. Wendy Bullock, who had developed the Garden up to 10 years or so ago.  There are some 80 different species of indigenous trees there.  We identified about 66 a good effort considering the lack of leaf, and it s a most interesting and valuable experience. One of the introduced species was Erythrophysa transvaalensis, the Red Balloon.  This occurs near Khami Dam also.  The Burnside specimen came from Gwanda.  IT would seem that these isolated occurrences North of the Transvaal are perhaps due to the popularity of the seeds as beads and necklaces.  Indeed, the Khami Dam specimens are all very near a Baobab Tree,  Adonsonia digitata, growing well out of its normal altitude, at over 1220 meters – 4 000 feet or more, and therefore clearly introduced.  Also there is stone walling there too.  Another tree, out of its normal habitat was Schotia brachypetala, not doing very well, though there are avenues of them elsewhere in Bulawayo.  Another was Synadenium gazense, doing too well, spreading all over.

There was a good representation of most of the common trees of Matabeleland, which I will not list, but it as a remarkably complete collection.  Full marks to the Bullocks.  A most enjoyable morning.

The day started off with a very friendly welcome given with a lovely cup of tea or coffee by Erica Boshoff and her mother, for which we were most grateful.  Once everyone had arrived we made head way for the miombo woodland on the banks of the Ruwa River. Before we set of walking it was explained to us by Kim with a rather amusing example of “spit and soil” how to prove whether we were on a sand veld or a greenstone belt.  Once this was achieved we set off to find a Ximenia caffra, sour plum, -with its soft rusty hairs and a Faurea saligna, Protea family, giving graceful appearance by its willowy leaves.  One could not but notice the beautiful specimens of Brachystegia spiciformis, msasa, some so tall and majestic, in company with a lovely specimen of Mundulea sericea.  These proved to be locally common.

On a very large anthill we came across Pterocarpus rotundifolius, Maytenus heterophylla and also a Rhus tenuinervis and which everyone was crushing the leaves deciding whether they smelt of apples or resin. We also found a Strychnos cocculoides with no leaves but a good crop of fruit covered with pale dots.  It was most interesting to observe its thick corky and ridged bark – natures provision against fire.  Though not exactly in our field, Meg found at the base of its trunk a small sensitive plant which closes its leaves when touched, a plant one tends not to notice.  Nearby was a beautiful Ochna pulchra, mermaid tree, very common to the sandy soils.

Kim discovered a cluster of Aeschynomene bearing bikini shaped pods which is an easy way to remember the tree.  Nearby a Schotia brachypetala, Fuchsia tree which has an extremely hard wood beautifully grained used for furniture making.  This was a particularly nice specimen. With the dry brown grass around we were dazzled by Cassia singueana in bright yellow bloom and a Canthium lactescens , its leaves turning yellow,  its buds, when squeezed still gave its milky fluid although now almost as thick as cheese.  In the same area we saw a very inspiring sight of a Ficus thonningii entwining itself around a large rock; this was truly something for the artist’s brush.

After lunch we ventured along the banks of the river towards the granite outcrop to inspect the stone walls built by the Shona some 250 years back, some of us also climbed up to their view point, from which we had a beautiful view of the surrounding country.  On our leisurely walk back we were able to admire the many aloes in flower, Aloe excela and Aloe chabaudii.  Unfortunately the frost had left its mark on the Syzygium cordatum and also on a cluster of young Parinari curatellifolia.  There was so much to see, for example, the Mundulea sericea was not a big tree but it was rewarding to notice how its under leaf has tiny silky, silver hairs.

Having enjoyed a really lovely day at Lindhurst Farm I would like to end off with a verse to remember the day.

It was brown with dust and dead from the frost.

Somehow the country seemed so quiet and lost

Then, the pop of a pod and the call of a dove

Made me realize it was not all at a loss.

For the spring round the corner the winter will go,

Life will burst forth again, with new shoots aglow,

So I bid you to stay, just awhile and recall,

How the wonders of nature abide over all. 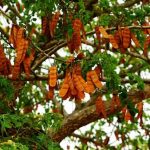 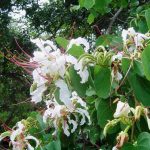