Whilst on tree walks, we often come across parasitic plants which take their nutrients from their host.  The parasitic plants are covered by the Flora of Zimbabwe web site however below are two examples of the two main groups. 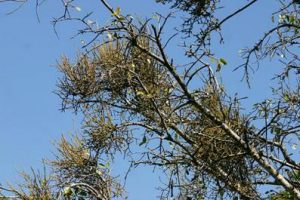 In studying the trees of Zimbabwe, it is often interesting to consider those plants which interact with them and, specifically, parasitic plants. There are two main groups which parasitise woody plants. The first is the more drab group of mistletoes, found in the genus Viscum, formerly in the family Viscaceae, and now included in the family Santalaceae. There are 9 species in Zimbabwe and further information about these may be found on the Flora of Zimbabwe web site.

The picture is of Viscum menyharthii, growing on a fig in the National Botanic Garden, Harare.

The second group is the family Loranthaceae which contains the often brightly coloured ‘matchsticks’-type flowers. 36 species have been recorded for Zimbabwe in 14 genera. Further details may be found at the Flora of Zimbabwe web site.

The picture below is of Globimetula mweroensis, here parasitic on Strychnos spinosa at Cleveland Dam, Harare. 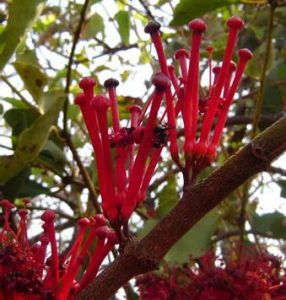 WHY ARE MISTLETOE LEAVES COLD?

On a recent tip to Mazvikadei it was noted that the mistletoe leaves were colder than ambient temperature, and this peculiar behavior has been noted on subsequent outings. Why are mistletoe leaves cold? Here are some thoughts and observations on this subject.

When in 1976, we moved to our farm in Shurugwi, near Gweru, we planted a pecan (Carya illinoensis) orchard. After about 12 to 15 years, mistletoe (unknown, probably Tapinanthus sp) threatened to become a serious problem, so we began a program of mistletoe eradication. We found that even small mistletoes had roots which extended up to 1 to 2 meters into the host branches. These roots, red in colour, grew between the cambium and the xylem, allowed the xylem to grow around them, so that when the roots were removed the root pattern was seen to be embedded into the xylem. In this position, the mistletoe root was able to draw water from the xylem.

Google searches of the web led to many mistletoe references to cold leaves, and high transpiration rates, but no direct explanations were found as to why this should happen.

Mistletoes are obligate hemiparasites. They can not exist separate from their hosts, and they get all of their moisture, and some, 10% to 60%, in some cases 100%, of their carbon from their hosts. To do this they must draw water from the host xylem and they must at all times maintain a lower pressure within its root system, than in the host environment surrounding the mistletoe root. If it does not do this the host would drain it of its moisture and the parasite would quickly die. To understand how this is done it is necessary to understand how tree plumbing works.

Imagine a tree 80 meters tall. It gets its moisture to the topmost leaves as follows:-

Root pressure can generate pressures up to a maximum of about 6m. This is done by osmosis, whereby relatively dilute solutions in the soil, try to lower the sap concentrations within the root, via the root surface, which is a semi-permeable membrane, thus forcing water into the roots.

Transpiration pull is the main agent for lifting water. Connecting the root zone to the leaf zone are a series of xylem cells forming a system of capillary sized tubes transporting water up to the leaves. Within the leaves, these tubes are connected to the leaf stomata. Here a meniscus is formed. It is this meniscus at the top of the cell column connected to the roots that generates the power to lift. The tree’s power to lift water depends upon the shape and surface tension of this meniscus. The shape of the meniscus is controlled by the leaf design, and the transpiration rate. A high rate of transpiration results in a high transpiration pull.

The “root” of a mistletoe is called an haustorium. Unlike the root of a tree which takes up water by osmosis, the haustorium has special cells which penetrate the host xylem cells and gain access to the host’s water within the host xylem cells. To drive the water, with its constituent mineral salts, into the haustorium requires transpiration pull from the leaves. The stomata in mistletoe leaves are permanently open to allow this constant need for transpiration. It is this constant transpiration, needed to suck water from host to mistletoe, which causes the leaves to be relatively cold.

The outing to Sanganayi creek at Mazvikadei near Banket aroused interest in various topics. Very evident were the parasites on the Leguminosae which were Pilostyles aethiopica and Loranthus.

Names have changed and Pilostyles ethiopica is now Berlinianche ethiopica. and the Loranthus we saw is now renamed Plicosepalus kalahariensis. It is a parasite of Acacia karroo and Acacia nilotica.

Meg Coates Palgrave stimulated my interest in Berlinianche. It was at a walk in the Mukuvisi woodlands some years ago that my curiosity was aroused by this peculiar little plant.

Dead twigs and whole branches of the Munondo are blackened and have tiny little wooden cups along their length resembling spots, or a bad case of tree acne, and are a little reminiscent of the seed capsules of the common bottle brush.

Meg was in the herbarium and looking through a volume of Flora of Tropical East Africa and came across Rafflesiaceae and wondered if Flora Zambesiaca had covered that family yet.

And yes it has, and yes, the name is Berlinianche ethiopica. It occurs in Zimbabwe, Zambia, Malawi and Tanzania, Gabon, Angola and Zaire. Although both Floras say parasitising species of Berlinia, Brachystegia, Isoberlinia and Julbernardia I stick to my contention that in Zimbabwe they are most often found on Julbernardia.

Meg quoting Visser (Johann Visser (1981) South African Parasitic Flowering Plants, and adding her own observations writes; “The South African representatives of this family (Rafflesiaceae) are all root parasites (of course they do not have Julbernardias there) whereas other genera may grow on, or rather within the stems of various trees. Considerable endophytic development of the parasite inside the host’s tissue is claimed to cause extensive invasion to the host and to precede the production of flowers-the only part of the parasite ever to protrude from the host. Being dioecious, male and female plants usually invade separate host individuals. That I can confirm. There was a lad from Switzerland here about 18 months ago and I took him and Tom Muller to the Mukuvisi and we were able to find both male and female flowers. In the Botanical Garden they had found only one sex.”

FZ says the perianth is in two whorls of 5-6 segments, purple-red, more or less fleshy. It also says herbarium specimens with male flowers appear to be far more common than those with female flowers.

I am sure that this is a true reflection but could well be coincidental.