It has been five years since I ventured to as great mountain, on the Eastern Border, known as Gurunguwe.  Unfortunately it is one hell of a climb and for most of our members in the Tree Society it would only be achievable if a friendly helicopter picked us up and dropped us at the shoulder forest found three-quarters of the way to the summit.  But what a treasure-trove of botanical rarities it hosts.  This time around the mountain was very welcoming, with fires a couple of months ago, followed by recent rains meant that the spring flowers were out, the trees were shady and the hiking was relatively easy.  The only drawback was the dense smog from fires both in Mozambique and Zimbabwe which seemed to have reached a peak in 2022!  However you haven’t really lived unless you have wandered this forest, meandered through the grassy meadows and climbed the peak mirrored behind the forest on the right.  Pray for good weather and be prepared to camp a couple of days so that you can enjoy the view behind the mountain where a giant’s dragon-tail of peaks heads East. Great to see some new faces at the monthly National Botanical Gardens visit in August!   Altogether 11 people were there to be led around by Tony Alegria, with input from Karl and Meg.  Not a great time for flowering trees and amazing how much the treescape changes as the warmer weather approaches.  Once again it is evident that careful planning at the implementing stages of the Botanical Gardens have been overtaken by the impact of dry seasons, little water and a limited replanting strategy.  However it appears that this is being rectified and there is some water available.  The Erythrina livingstonia was shedding its red and white seed from the large knobby pods evident against the skyline, a couple of Kigelia africana had flowered profusely but there was not a fruit in sight, Milicia excelsa was growing strongly and none of us had recently seen the seven survivor mvuli trees that line the banks of the Runde River in Gonarezhou National Park in the southeast lowveld.  On discussion and checking the records, they do occur in the lowland river valleys draining out of the Eastern Highlands.

The acacias, left that made such a spectacular avenue heading southwards from the office block look very sorry these days.

Shrub of the Month: An invasive plant pest turned into fabulous art

In mid-September I drove a long way down a dirt track in Domboshava. Small homesteads lined the road, and flocks of feral pigeons took wing, flashing white primaries. Suddenly ahead of me stood two giraffes, their long necks stretched serenely towards the blue sky. Not real giraffes though. These were the latest creations of sculptor Joe Zata and his brothers. This family of artists is creating giant sculptures — giraffes, rhinos, elephants, wild dogs and much more — from Lantana (Lantana camara), that notorious shrub native to tropical America that has spread aggressively throughout Zimbabwe and the region over the last century. The brothers are keenly aware they are performing a crucial environmental service alongside their creativity. “Lantana is everywhere and people don’t want it,” Joe told me, “so I’m trying to make use of it through art.” The chief’s chair is the centrepiece of the family’s dare, or council, where they plan their next works of art in the shade of a Musawu (Ziziphus mauritiana).

“I have a strong rural background. I grew up seeing animals and I really loved them,” Joe told me. “That’s where my inspiration came from.”

He and his brothers learnt their craft from their father, a farmer who knew his trees and worked with wood to create cattle yokes, cooking sticks and mortars for pounding grain.

But they took things a step further, and used their craft to create art.

Initially this was done using driftwood or tree stumps: the brothers don’t cut down trees for their sculptures. But during the prolonged Covid-19 lockdowns of 2020, they experimented with the long, spiny branches of Lantana.

“It takes a lot of time and work,” says Joe. “We cut it and leave it for a week or two, so that the stems dry a little bit and then we bend them.”

In this way their eye-catching animal sculptures and other garden features are created. These are then transported into Harare on the back of a small lorry and exhibited at garden shows like “The Annual Garden Show” held in September. They sell between 2-3 pieces per month, says Joe. Some of their works can also be seen on display along Harare Drive, near the intersection with Collins Avenue. Some recent works that might have delighted passing motorists were a giant rhino with a mighty upturned horn, a huge tortoise and an elephant.

Thomas Marambanyika, a senior lecturer in geography and environmental sustainability at Midlands State University, says Joe and his brothers should be applauded for turning “an environmental threat into an economic opportunity.”

Editor’s note:  Perhaps artists in the Eastern Districts could do the same with the honeybush! Present on  a rather cool sunny day which got pretty hot as the day progressed were: Frances Morris, Mary Lovemore, Meg Coates Palgrave,  Teig Howson and the boys:   Jan van Bel, Jim Dryburgh, Peter Morris, Ryan Trusscott  and myself. Today’s mission was to find trees in flower and anything else that was interesting.

The first tree we looked at which had many buds and a few flowers was an Eucalyptus torelliana. Cadaghi, there has been a name change and these are now known as Corymbia torelliana. Strangest thing about them is that they always have many juvenile leaves along with the adult leaves. And as for most Eucalyptus, no petals, just stamens and these trees have a really good looking fruit being a smooth barrel shape gumnut. We than looked at: an Acacia erioloba which had just started flowering and as with most straight-thorned acacias, the yellow flowers were globular; the Acacia nigrescens. Knobthorn  had many spikes of buds but only a few creamy coloured flowers could seen; then we saw a few Acacia galpinii with many purple spikes but no creamy coloured flowers as yet.

The sausage trees, Kigelia africana had many buds but only a few flowers  were partially opened.  Next to these trees was an Erythrina livingstoniana with its strange looking pods.  The most pods I have ever seen on this tree! The Erythrina abyssinica and Erythrina lysistemon had just started to flower so had only a few red flowers.

The Newtonia buchananii (see below) was absolutely laden with flower spikes as I have never seen before. The question arises: is this as a result of last year’s below average rainfall or could it be in anticipation of a very wet (or dry) wet season ahead? The Albizia anthelmintica was also laden with their shaving brush flowers – no petals.

Really looking spectacular were a pink and a yellow Tabebuia. I will begin a new gallery of spectacular trees on our website using these two trees!  Editor’s note: Their names have changed and are as above in the photo captions.

Of interest were many small Mexican apple trees growing along a trench in which a new pipe had been laid before the rains began. No doubt, the workers had been eating the fruit and spitting the seeds out into the trench. If these saplings are not removed, I don’t hold out much hope for the new pipe!

Gurunguwe, A Mountain and its trees on a march At the end of September we went on an expedition to Gurunguwe Mountain on the eastern Border of Zimbabwe, with the man-made distinction between the two countries of Zimbabwe and Mozambique going from high point to high point in this area just northeast of Penhalonga.  The mountain is quite something to behold, standing like a colossus and half-filling the sky when you look at it from the John Meikle research Station on the way there.  It is tall, dark and foreboding and everyone was a little apprehensive about the task ahead, to climb from around 700 metres above sea level (masl) to 1869 masl over a distance of about 5 to 6 kilometres.  In the Mountain Club of Zimbabwe, Gurunguwe is famous for the surprises it springs upon the unwary.  We have now climbed it 5 times since 2009 and on four out of the five times it has thrown unbelievable storms, mists and the like at us as we plodded our way steadily upwards.

It is a mountain of mysteries, with some plants only found here and on the ridges of the Chimanimanis.  There are Strelitzias, Aloe arborescens, Ericas, Proteas, that cling precariously to the precipitous cliffs.  There are tall fluted-stem trees, like the one below left, strange contorted growths, and beautiful curved lianes that once held a sapling prisoner, but of which today, there is no sign.  This time we were lucky, exploring the Mozambican side of the mountain we found a sparkling stream, coming straight out of the bedrock, which means that carrying water up the mountain is now a thing of the past.  Tree ferns line the small, crystal-clear ponds.

The forest on the shoulder of Gurunguwe Mountain is something to behold.  Great trees thrusting skywards, in most cases from a relatively uncluttered forest floor.  However in some parts and probably where a former giant has taken a tumble and ripped an opening to the blue skies above, there were dense thickets of young saplings.  Yellowoods were much in evidence, Albizias and Dracaena.

At around 1 500 to 1 600 masl, this forest cannot be claimed to be truly tropical and immediately above it there is a sharp line that only grasses, flowering shrubs and sparsely spaced proteas make up the vegetation.

However deep in the jungle we found upright, empty prisons where strangler figs had long since squeezed the life out of the host trees that gave them leverage to reach the light above.

Some of the tree trunks resembled gargoyles with massive distorted galls around the whole stem.  And underfoot the floor was a thick carpert of springy leaf litter and mould, full of  fine root hairs from the trees above.

Odd trees had been ripped out of the ground by strong winds and the fragility of the forest was very evident in the shallow, taproot-less systems that somehow manage to hold up the forest giants as they sway together in terrifying winds.

A Tree-less finish to this newsletter, but if anyone in the Tree Society is craggy, young and fit enough to make the strenuous climb up the mountain, I will be happy to show the way.  Or to find a helicopter passing the same way.  You too can frolic in the early morning light at the very top, or peer down in awe at the Dragon’s tail that heads off into Mozambique, virtually tree-less.  And you may meet these fine cattle, right there, at the very top. 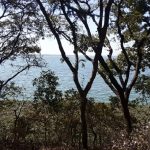 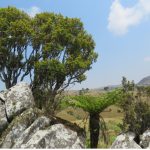