The Tree Society Committee wishes all members a very HAPPY CHRISTMAS and a New Year filled with peace and harmony.

Saturday 7th December: Botanic Garden walk. Join us for an hour and a half in this delightful garden. We will start at 0830 hrs from the car park.  Bring a friend and enjoy the Gardens at this beautiful time of year.

Please bring some Christmas fare to share for tea and bring your own lunch as well as drinks and glasses, plates, and cutlery.  Come and join the fun, we hope to see you all there. The Society will provide tea and coffee with the necessary cups, saucers etc..

There will be no other outings in December. This month’s Tree of the Month comes to you with a recipe to sweeten up your December. It is the Kei-apple, Dovyalis caffra, and it has been in fruit this past month. At least it has in Mount Pleasant, where I have a couple growing outside my bathroom window. Each year at this time I watch in awe as the branches became laden with green fruit, later changing to apricot-yellow. They fall to the ground, and are eaten by insects and birds.

The species occurs naturally in Zimbabwe’s southern lowveld area, often growing on anthills, and reaching heights of 5-8 metres. But now it’s widely cultivated in gardens as far away as Australia.

Tree Society committee member Ann Sinclair’s family has had a long association with this tree, so I decided to turn to her for inspiration. She told me that her mother grew up in Constantia, in the Cape, on a farm where there was a Kei-apple hedge said to have been planted in the 1700s. Years later the farm was sub-divided into plots to create the suburb of Kreupelbos, and Ann’s aunt campaigned to save the hedge, which surrounded some of the plots. “Holes had to be cut to allow entrance to the plots and I think some owners removed the rest of their portion of hedge. I do not know if any of it is still there,” Ann told me.

Dovyalis is Greek for spear, and it is an apt name for this species – the tree’s contorted branches bristle with thorns up to six centimetres long. This is what makes it such a useful protective barrier and the trees, planted close together along walls or fences, are widely used for this purpose. If you’re wanting to cultivate your own plants, the South African National Biodiversity Institute recommends that seeds be collected fresh from ripe fruit, cleaned, dried in a shady spot then pressed down just beneath the surface of seed trays of river sand or seedling mix. But hedges aren’t the only uses for these trees, which are recognisable in the non-fruiting season by their shiny evergreen leaves clustered at the ends of what botanists term dwarf lateral spurs.

Ann told me that the fruit of the Kei-apple makes wonderful jelly. She was kind enough to share a recipe with Tree Life readers. It takes just five easy steps. But, she says, make sure the fruit is under-ripe when collected. That is when it is high in pectin — the natural sugars that help to thicken jam. 1) Place the fruit in a saucepan and cover with water and boil until soft.

2) Strain the softened fruit through a cloth or cotton bag suspended over a bowl.

4) Cook rapidly, skimming well until the mixture jells when tested on a cold plate.

Do not make jelly with more than 1 kg of fruit at a time.

We had the first good rains of the year the day before our outing and the Gardens smelt fresh and dust free. A small group of seven people had arrived. Mark and Meg were there, so we were guaranteed an interesting walk. As Tony was unable to join us, Ann Sinclair led the way. Entering the gardens straight North of the parking we were stopped by the Xeroderris stuhlmannii, Wingpod, which was now in flower. The inflorescence consists of a cyme with many white pea-like flowers. The same species but smaller, standing only a few meters away, was in full leaf and had no flowers at all.

We walked to the side of the dry pond where we found Diospyros mespiliformis, Ebony Diospyros, its few remaining dry leaves not convincing everyone that that is what it was. Next to it is a small tree which looks a little like Harpephyllum, but according to Mark it could be Pistacia chinensis, a small winter-hardy tree from east Asia and China. Passing Acokanthera oppositifolia, Common Poison-bush, it was mentioned that this tree is escaping and spreading. We crossed the lawn, now looking like a sand plain due to recent unsuccessful borehole drilling. At the Newtonia buchananii, Forest Newtonia, Mark showed us the bee-sting-like glands on the rachis, which we are used to seeing on Senna singueana. Another beautiful leaf with a winged rachis which attracted some interest was Filicium decipiens, Fern-leaf. Close by is a Rothmannia manganjae, Scented Bells. It had plenty of new fruits hanging between the old ones. A climber growing on the trunk was Hippocratea africana, Paddle-pod. Further on a trifoliate leaf picked by Meg had an aromatic scent and could have been a Vepris

We then entered the forest section and saw a huge Albizia glaberrima in flower.  Some pictures were taken before we started returning to the cars.

Bilal Khatri, Dawn Siemers , Gillian Spurway,  Graham Mills, Jan van Bel,  Mary Lovemore,  Meg Coates Palgrave,  Werner Fibeck and I shared transport for this outing after having met at Mukuvisi Woodlands.   The nine of us crammed into two vehicles and headed off to the venue, meeting Ann & Jim Sinclair at the entrance gate to Prince Edward & Henry Hallam Dams.  I was concerned because we had had some rain in the morning and the last time we wanted to go to this particular venue, we had had to cancel our outing due to rain. However, once the morning shower was over, the sky cleared and we enjoyed clear skies till about eleven o’clock when it started clouding over again.

It was really good to see Mary on her first outing since all her health problems began about a year ago. Whilst we were preparing to start, Bilal found a tree in flower and brought a sample to the group who identified it as a Mundulea sericea. Botanising was rather difficult as there were many leafless trees whilst the others that did have leaves had very young leaves – too young to see any real detail. The first tree we investigated was leafless and looked as though someone had done a lot of digging to harvest the roots – we have no idea what that particular tree was.  Some of the trees that had very young leaves also had either buds, flowers or young fruit – this was the case for Pouzolzia mixta. Snuggle-leaf, Ximenia caffra, Sour-plum, Croton gratissimus, Lavender Croton  and Burkea africana, Red Syringa.

The area where we were botanising was sandy and very rocky, providing quite a variety of trees. Unfortunately, wood poachers also liked the area as there was evidence that wood had been harvested that very morning.  There were quite a few new stumps in the area – this was reported to the person at the gate who would notify the police.

We came across a tree with very young leaves and almost dry fruit. The leaves looked like they could be Pseudolachnostylis maprouneifolia. Duiker-berry but that tree drops its fruit while still green that ripens on the ground, becoming yellowish brown – so, this is a mistree!

Whilst enjoying a chat and having our refreshments, the sky was clouding over rather rapidly so we decided to call it a day and head for Mukuvisi Woodlands from whence we started. However, en route, we had a quick stop to look at a ground orchid in flower. If we hadn’t stopped we would not have been caught up in the rain once we arrived at Mukuvisi.

On the road out of Henry Hallam we saw quite a few trees we hadn’t seen in the area we visited. Some of the other trees that were not mentioned above are:

Only five of us turned up for this tree outing and enjoyed botanizing for big and little trees. Although rain could be a problem, at that moment, the weather was right in the Goldilocks zone – not too hot and not too cold, in other words, just right.

Dawn Siemers, Jan van Bel, Mark Hyde, Meg Coates Palgrave and I began by investigating  the street trees outside Deon’s home.  The first one was a Tecoma alata. Orange Trumpet-flower or Orange Bells originating from Peru – it resembles the Tecoma stans but the flowers are orange, not yellow. We recorded: Acacia (Vachellia) abyssinica, Nyanga Flat-top;  Acrocarpus fraxinifolius, Kenya Coffee-shade; Toona ciliata, Cedrela;  Pinus patula, Patula Pine and two Lagunaria patersonii with common names that include Norfolk Island Hibiscus, Primrose tree, Itchy bomb and Cow-itch. Deon told us about his workers complaining of being very itchy when they were planting lawn under these trees – there are fine hairs and bristles which makes one itch, hence one of the common names.

We then discussed the first tree we came across just inside the gate, which was a Ficus craterostoma, Forest Fig fighting for space with an avocado tree, reeds and a small Bauhinia variegata. Along the inside of the front wall were garden plants that Mark had a good look at and amongst them was a young Celtis africana, White-stinkwood. Nearby was an old Spathodea campanulata, African Flame, with some of the innards of the lower section missing. Next was a Hymenosporum flavum. Native Frangipani from Australia followed by a Phytolacca dioica, Belhambra that had fallen over. There were over sixty growth rings but the strangest thing about this tree was that there was no wood – just layers of fibre.

Deon had covered a stump with what resembled Japanese lawn grass and had planted a few bonsaied species on it .  Some,  although small, were fairly easy to identify.  In fact Deon had planted bonsaied species in a quite a few places:  Commiphora africana.  Poison-grub Corkwood; Commiphora mollis, Velvet–leaved Corkwood; Acacia (Senegalia) goetzei Purple-pod thorn; Tamarindus indica, Tamarind and many more.

Apart from some cycads we also investigated the palm trees – Syagrus romanzoffiana. Queen palm and Roystonea regia, Cuban Royal palm were obvious but there was an unknown palm with fan-tailed leaves. What was really interesting was what looked like two different species of Archontophoenix side by side – one had a swollen base and step-like markings from the old leaves whilst the other had no swelling and where the old leaves had been was not as obvious. They appear to be Archontophoenix alexandrae, Alexandra palm and Archontophoenix cunninghamiana. Bangalow or Picabeen palm.

Deon and Martha run a B&B and we enjoyed drinks from the bar as well as tea and eats in the open-sided dining room which had huge round tables.  We then had to leave as the first rain drops began to fall. Thank you to Deon and Martha for a very enjoyable afternoon. 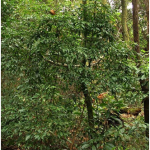 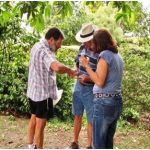