Sunday April 16th: No outing due to Easter/ Independence weekend.

Saturday April 22nd: Outing to Haka Nature Reserve, Cleveland Dam. Our last two visits to Haka have been in the hot, dry season. There should be much of interest at this time of year. Meet at the gate at 14.15 for a 14.30 start. We hope to be able to get a discount at the gate as before.

NOTICE OF THE ANNUAL GENERAL MEETING OF THE TREE SOCIETY

Notice is hereby given that the 67th Annual General Meeting of the Tree Society of Zimbabwe will be held at the Rondavel, Mukuvisi Woodlands on Sunday 21st May 2017 at 9.30 am.

Any proposals/resolutions and nominations for office bearers (and any volunteers to be on the Committee) should be forwarded by email to the Secretary Teig Howson at teig.howson@gmail.com by Sunday 5th May if possible, although proposals and nominations will be accepted from the floor.

After the AGM there will be a photographic presentation by Dave Hartung about last year’s Tree Society trip to Humani, in the Save Conservancy

Neither Cyclone Dineo, the prospect of “4-wheel drive only” roads nor Sunday morning lethargy put off the 11 members who gathered at Mukuvisi for the outing. I don’t think any of us were disappointed in our decision to be out on this beautiful morning.

Having paid our dues at the very dilapidated gate to an elderly, toothless, Rastafarian with magnificently decorated braids, wearing a very bright red beanie and HUGE ear phones (it would have been great to get a photograph of this delightful gentleman) we proceeded on our way. Fortunately there had been no rain in that area for a couple of days so the small lakes (large puddles) were not as deep as they had been a couple of days earlier when we went to recce the area.

We stopped at a rocky outcrop after we had negotiated the first major wash away on the road. We first looked at Grewia monticola, Grey Grewia, with its drooping branchlets densely covered with creamy or rusty woolly hairs. It was in fruit but not ripe yet. Close by was a Snowberry, Flueggea virosa, formerly Securinega virosa. The berries were not yet white and so not ripe. Meg was able to demonstrate the Velcro-like quality of the leaves of Pouzolzia mixta, which are alternate, simple and ovate, dark green and rather rough above, the lower surface being almost silvery white and woolly, and clearly three veined from the base.

In the same area we looked at Monotes glaber, Pale-fruited Monotes, also known as one of the “helicopter” fruits – delightful to send whizzing down to earth when in a childlike mood. There were several Ochna pulchra, Peeling-bark Ochna or ‘mermaid-tree’ with its rough lower trunk which then becomes smooth and beautiful –like a mermaid! We noted Vitex payos, chocolate-berry with 5 bright green leaflets. Peltophorum africanum, African-wattle; Pavetta schumanniana, poison bridesbush – the leaves are poisonous, causing ”gousiekte” in stock and resulting in heart failure, but the toxic principle has not been isolated. The roots are said to be used as a remedy for colds.

Parinari curatellifolia, Mobola-plum, which is much sought after by local people for its pleasant-tasting yellow flesh. It has a variety of uses and forms a staple item in the diet of rural people during drought years. It may be eaten as it is or made into a porridge, a delicious syrup is prepared from it, it can be included in cakes and it also provides the basis of a refreshing, non alcoholic drink. Also of an intoxicating liquor! We all love Mobola plums. 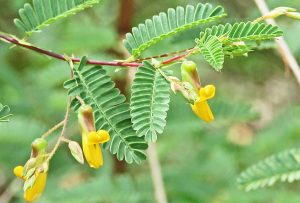 We were enchanted at the pods of the Bikini Tree, Aeschynomene sp. (Meg thinks A. schliebenii) with its delicate orange pea-like flowers which were providing nectar for the many bees visiting them. There were many of these perennial herbs or shrubs up to 2 m high in the area – one wonders what the honey will taste like.

We then moved on down the road until we were distracted by a thicket in which Clerodendrum glabrum, White Cat’s Whiskers, which was flowering profusely. The flowers were white, about 10cm in diameter, with reddish, pink or mauve stamens and style, in dense rounded terminal heads. 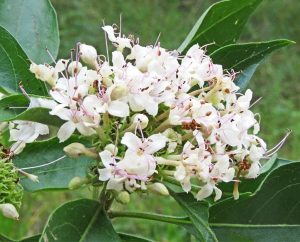 A little further along the road we examined Afrocanthium lactescens, Gummy Rock Alder. It was of interest to most of us that the extremely sticky gum could be squeezed from the “mammary” gland or growing tip. In the same area we saw a magnificent Schotia brachypetala, as well as Psydrax livida, (ex Canthium huillense) Green – twigs Quar and Celtis africana, White Stinkwood.

On the other side of the road from the Afrocanthium were several beautiful flowering ground orchids which Musa put on Facebook and Mark identified as Habenaria stylites. After spotting these we then noticed many, dotted around in the luxurious bush, what a pretty sight. 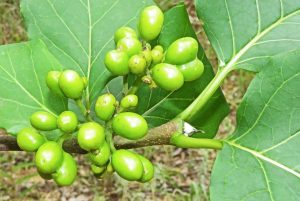 We then diverted to look at the magic of a “spilling” dam and took a track where we thought we would get a good view of the spillway. It was wonderful to see and hear the water cascading over the spillway, by which time lunch was calling and we drove to the picnic site below the dam wall. After a leisurely and most enjoyable lunch break the more energetic climbed the wall to see the full beauty of a pompom full dam.

At the end of the dam wall we observed Vangueria infausta Wild Medlar and Vangueriopsis lanciflora, False Wild Medlar and we able to see the difference. Then we looked at Pittosporum viridiflorum and Dichrostachys cinerea, Chinese Lanterns.

There was also some debate on Faurea saligna which Meg thought might be Faurea delevoyi, River Beechwood. But the narrow leaves under 2 cm wide are actually those of Faurea saligna, Willow Beechwood.

As the sky was now threatening again we decided to call it a day and what a very pleasant day it had been. We were delighted to welcome Musa Dausi and Sue Feltoe, both new members. Sue also brought her brother Mike and sister-in-law Chris and their very serious dog, who also seemed to enjoy his outing.

We are feeling very sorry for all members who did not venture out on this beautiful morning to do the really beautiful drive to Forrester Estate, Mvurwe, where Buks Conradie had laid on a most exciting day for us. He had left nothing to chance. There were stepping stones across the river, pathways cleared through such a lovely woodland and further up to some rock paintings. There was even a loo prepared with very elegant loo paper dotted with pretty flowers. Thank you, Buks for all of that.

The six of us, Dave, Meg, Jan, Graham, Bilal and Mary left promptly on time, but with police checks etc. it took us a full two hours to get to Forrester. Buks and his wife had tea at the ready, but as it was so late and we were all keen to get botanising, we set off immediately after a quick “pit” stop. The area that Buks had chosen for us to investigate was a good 20 minutes drive from the homestead.

We parked near a fast flowing, crystal clear stream flowing over a rocky outcrop into a lovely pool surrounded by dense woodland – an idyllic situation. This little river flows through the Makuvi Valley and the altitude on the rocks was 1326m. We crossed the river via the stepping stones and explored the woodland on the other side, following a cleared path which led eventually to the rock paintings. By the time we got back to the river crossing it was nearly lunch time, which we spent under a shady Mimusops zeyheri, Common Red Milkwood, on the rocks beside the river. After a leisurely lunch, a short walk was taken up the river where the excitement for the afternoon was the spotting of an Ilex mitis, Cape Holly, which actually had red berries on it too.

All too soon we had to pack up to start the long journey home. We waste a lot of botanising time these days with our anxiety to get off the roads before dark – but such are the times.

Again, very many thanks to Buks for facilitating such a lovely day. I hope we will be able to come again to explore this lovely corner of Zimbabwe. 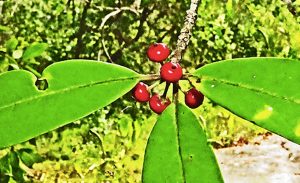 Some additional notes from Meg:

It was a very exciting day. Thanks Buks for inviting us, and to Mark I can add identification to some to the puzzles.

The RUBIACEAE with little fruit we saw near the bottom is Tricalysia niamniamensis, Scaly-bark Jackal Coffee. The imparipinnate leaf with leaflets with a serrated margin was not growing well enough to exhibit opposite leaves and had got a little spread out. It could only be Stereospermum kunthianum, Pink Jacaranda. Seeing the Ilex mitis in fruit was very special. It is not a tree I have seen very often in Zimbabwe and in fruit – never before.

But the highlight had to be appreciated in retrospect. This is what I thought might be Rapanea melanophloeos. The leaves did have a very conspicuous sub-marginal vein, a vein all the way around just inside the margin, and I did think of Faurea but it didn’t click. This was Faurea delevoyi, River Beechwood.

Because it is hairless I have always imagined it looked like Faurea saligna, Willow Beechwood, but had wider leaves. In fact the leaves look more like those of Faurea rochetiana, Broad-leaved Beechwood, but the leaves are not hairy!

The following is a list of trees recorded during the day: 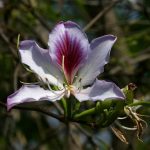 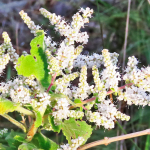