Saturday March 4th: Botanic Garden Walk. Meet in the car park at 8.45am for a 9am start. The walk will last for approximately one and a half hours.

Sunday March 19th: Outing to Forrester Estate, Mvurwe: by kind invitation of Buks Conradie. We had planned to visit Forrester Estate last year in June but because of the fuel/cash crisis we had to postpone it. We now look forward to this outing after the wonderful rainy season we have had. We will meet at the CABS Centre Car Park at 7.30am for a SHARP 7.45am departure.

Saturday March 25th: Visit to the home of Peter and Frances Morris: We have been invited to see the amazing number of indigenous trees which have been planted on this small plot. Meet at 14.15pm for a 14.30 start. Parking will be on the Close but there will be a car guard on duty. 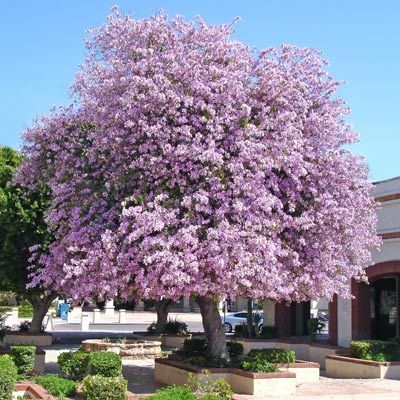 Sometimes known as Pink Bauhinia, Pink Camel’s Foot, as well as one of the Orchid or Butterfly Trees, this introduced species is a cousin to our common native Bauhinia species – B. galpinii and B. petersiana – and belongs to the family Caesalpiniaceae. In all there are more than 340 Bauhinia species worldwide. This species is native to southern China, the Indian subcontinent and South-East Asia but has naturalised in all the tropical and sub-tropical parts of the world. The specific name ‘variegata’ means irregularly coloured.

Not usually as large as the purple Bauhinia (Bauhinia purpurea), B. variegata is a deciduous shrub or small spreading tree growing to 2 – 4 metres (taller in wetter climates) that was widely introduced in Zimbabwe as a street or garden tree for its spectacular, long-lasting flowers.

The bark is smooth on young trees but becomes rougher as the tree ages. The simple leaves are typically lobed at the apex.

This species flowers in Harare from March onwards to October. The five-petalled flowers can vary from pure white (var. candida Voigt), to deep pink, usually with a dark purple-red centre on the upper petal. To see the white variety in full flower is a sight to behold, especially by moonlight. 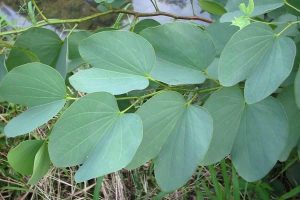 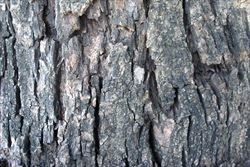 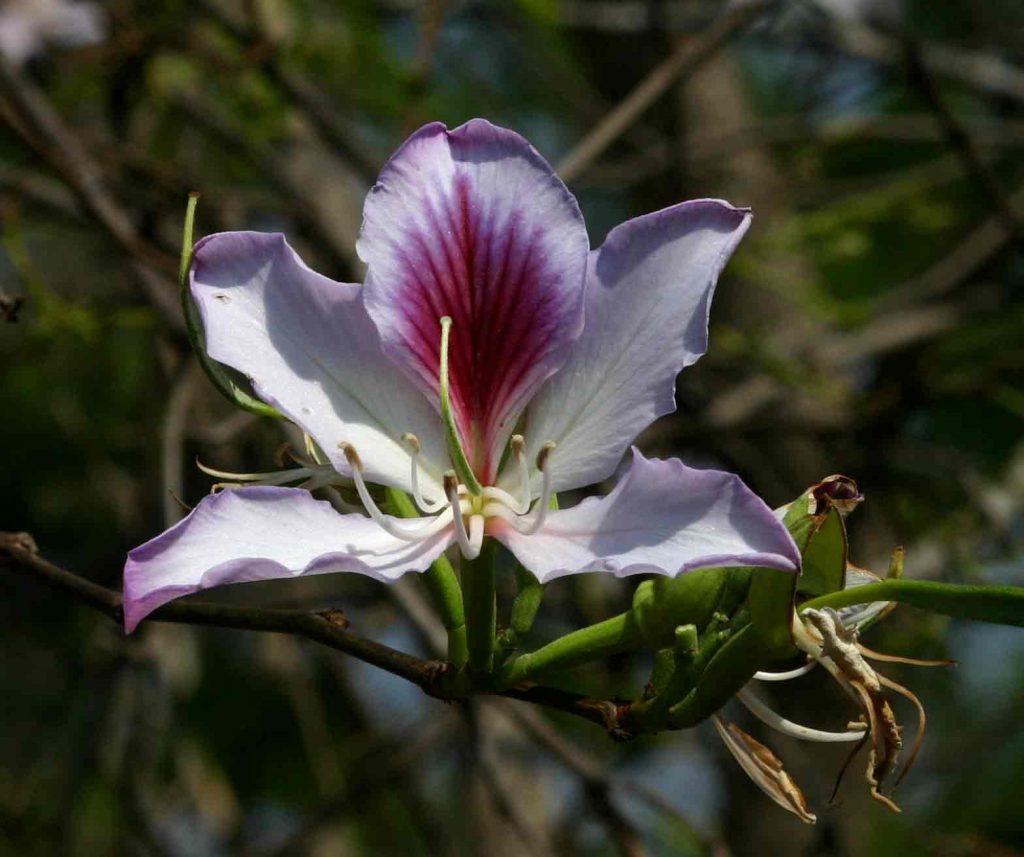 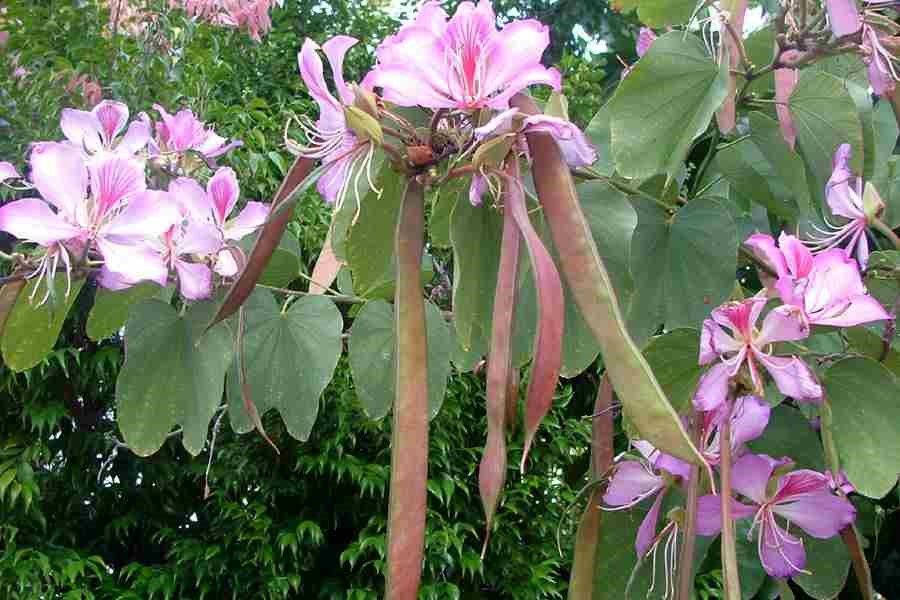 The fruit is a long, slender flattened pod, green and translucent when young, drying to blackish-brown, that persists on the tree throughout the winter. Last year’s empty pods are often seen, split while still on the tree, during the next flowering season.

This species has many medicinal uses globally: anti-bacterial, anti-diabetic, anti-helminthic (against worms); anti-arthritic, anti-inflammatory, hepato (liver)-protective, anti-oxidant and anti-carcinogenic, as well as a molluscicide.

A useful garden plant that will quickly fill a gap, it can however also be regarded as an environmental weed, or potential weed, because it has all the features of an opportunistic pioneer – it readily suckers, its seeds germinate readily, and it may invade roadside ditches and disturbed areas.

What promised to be a wet, soggy, gloomy afternoon, which left one wondering if it was worth while putting down one’s book, emerged into a gloriously sunny, crystal clear blue skies afternoon which not only pleased our delightful hosts, Katrin and Steven Gamble, but gave them the opportunity to guide us round their truly magnificent garden. Eighteen of us were fortunate to make the most of a lovely afternoon and were not disappointed. Following a good walk around this lovely property, Katrin and Steve provided a magnificent tea which gave us a chance to catch up with news. Thank you to Katrin and Steve for hosting, so graciously, our first outing of the year. We are very grateful to you.

The following is a list of the species, indigenous and exotic, recorded by Mark and Bilal:

The following article is a reminder that exotic trees are often able to establish and grow far better in their new environment than they did where they came from, possibly because of the benefits of the new environment, but largely because of the lack of local pests and diseases and limited competition from surrounding species.

Recently we had a letter from Michael J. Shields of Long Beach California who writes:

“In the January-March 1976 issue of the magazine “Trees in South Africa” (Vol. 27 #4) on page 91, a certain D.J. Pilbrough, who identifies himself as Director of T.P.C of Rhodes, states that a certain mixed stand of Eucalyptus grandis and Eucalyptus microcorys at Inodzi, Rhodesia which was planted in 1905 had attained a height of “over one hundred meters or 330 feet” by 1976, with diameters around one meter.

Are you able to either confirm or refute this report? What in fact is the greatest height attained by these trees in Zimbabwe? The reason for this inquiry is that I am gathering material for a book on the subject of remarkable trees, and as the article headline suggests, these eucalypts (if the report is correct) would establish a new record for rate of growth to that height, and height records for both species. Heretofore, the only eucalypts reported to exceed three hundred feet were E. regnans, E. globulus and E. diversifolia.”

We contacted Mr. L. J. Mullin, Divisional Manager, Research, of the Forestry Commission who has replied to Mr. Shields as follows:

“The stand of E. grandis and E. microcorys at Inodzi Farm, near Penhalonga, is well known to us and contains by far the tallest trees, indigenous or exotic, in this country. However, the report that appeared in the January-March issue of “Trees in South Africa” Vol. 27, No. 4, was exaggerated and the information given below sets the record straight.

The article below is from Kim Damstra. Mary had found a previous article with a little teaser in it that he had written for Tree Life July 1983 and he has had another look at it.

ROOT NOTE It is exciting for me, now in 2017, to reread a Root Note I wrote on the classification of plants in the 1980s. I trained in plant taxonomy in the 1970s with Prof Schelpe at UCT. We had many hours of drawing cross-sections of flowers and I still have the volumes of these meticulous diagrams. The idea was to learn as many families as possible and then to understand how the families fitted into the two systems of classification that were used in the local herbaria: Engler & Prantl and Bentham & Hooker. One needs to understand just how dated these systems are. My daughter read biology recently at University College London where students mill around the remains of Jeremy Bentham on display in a wooden cabinet. Jeremy Bentham’s nephew, the botanist George Bentham, was born in 1800 and developed his botanical classification with Hooker who was a great personal friend of Charles Darwin. The German botanists Engler and Prantl were both born in the 1840s. As a student, I relied heavily on my mother’s 1951 copy of Willis’s Flowering Plants and Ferns. So the systems we were taught in the 1970s were positively ancient and cracking at the seams. Ripe for revision. I remember when I found Cronquist’s 1981 volume in the library at the University of Zimbabwe it blew open my mind. All the families I knew well were reshuffled into a more logical arrangement. I saw families collected into their orders, showing links I had not seen before. I spent many happy hours with Cronquist. Since then DNA studies have exposed the relationships between families more conclusively than all these older studies of structures and chemistry could ever have done. Species I have never heard of now take basal positions in the system. The most important change is that flowering plants are no longer simply divided into monocots and dicots – although these two large groups are still somewhere.

In my day the woody magnolia group was thought to be the closest to the most ancient flowering plant. Now the water lilies (Nymphaea) and Cabomba (commonly sold as an aquarium plant) are considered to be a more ancient group, sometimes loosely called the paleodicots.

It is then that we find the magnolia group, including families in the same orders as the Magnolia (Magnoliales), the Black Pepper (Piperales) and the Laurel (Laurales). These flowers often have multiples of 3, with many stamens and many carpels (separate ovaries). These are no longer included in the group of “True Dicots” (Eudicots).

It is only after these basal groups are out of the way that the rest of the flowering plants can be divided up into the monocotyledons and the eudicots.

Having said all that the rest of the old Root Note from the 1980s still has general guidelines that apply to the flowering plants, so here it is, slightly modified:

Everyone seems to understand basic zoology. If asked to arrange a frog in the progression jellyfish, shark, lizard, bird, they will put the frog between the shark and the lizard. But if asked to put the BIGNONIACEAE (Jacaranda family) into the sequence ANNONACEAE (Custard Apple family), LEGUMINOSAE (Pea family), and RUBIACEAE (Gardenia family), they fall apart as if they were being asked to translate ancient Arabic. And yet it is not overly difficult with a few rules:

Flowers with separate petals (think of a Magnolia) are placed before fused petals (visualize a tube-like Gardenia and Jacaranda). Fruit that sits below the flower (remember a Gardenia where the remains of the flower sits on the end of the ripening fruit) is considered a more advanced feature than fruit that develops within the petals (as in a Jacaranda). Flowers with many anthers usually come before those with few. So on this basis the BIGNONIACEAE (Jacaranda family) falls between the LEGUMINOSAE and the RUBIACEAE. We are always consulting books like Coates Palgrave’s “Trees of Southern Africa”. It would help us a lot if we have a basic idea of how plants are arranged. 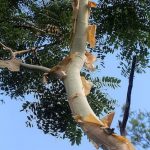 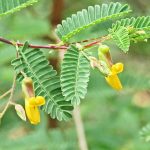