Saturday 5th September: Botanic Garden Walk. It is spring time and as ever there will be much to see. Meet in the Car Park at 0845 for 0900 hours. The walk will last for one and a half hours.

Sunday 20th September: Outing to Calderwood Park at Peterhouse School. The Tree Society has not been to this area before – do not confuse it with Gosho Park which is on the other side of the road at Peterhouse Girls School. This promises to be a very special outing and we hope to have Penny Raynor and some folk from the area with us. We will meet at Mukuvisi Woodlands car park for a prompt 0815 hours take off for those wishing to travel in convoy or wanting to share transport. For those wanting to travel on their own the directions are given below.

Saturday 26th September: TO BE ADVISED. Venue still not confirmed.

TREE OF THE MONTH  Acacia karroo 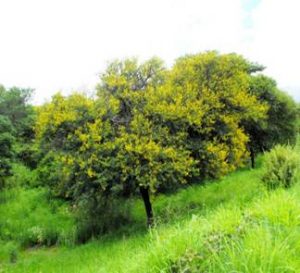 Etymology: The name Acacia is derived from the Greek word “akis” for its characteristic thorns. The first Acacia originally classified by Linnaeus was Acacia nilotica, commonly found along the Nile river. It follows that Acacias have thorns. The epithet “karroo” is derived from the Karroo region in South Africa. I am aware that there are also thornless “Acacias”, not for us to question, there are also plenty of brainless “homo sapiens”.

In Zimbabwe we have 43 different species of indigenous Acacias. Identifying Acacias is no easy task, if you are interested try and obtain Jonathan Timberlake’s “Guide to the Acacias of Zimbabwe”, it complements Coates Palgrave and is somewhat lighter to carry in the field.

Acacia karroo is common at altitudes above 1000m but shows a preference for alkaline soils, their presence is an indicator of “sweet veld”. In Matabeleland it forms dominant patches along streams in deep red or blackish nutrient-rich clay soils. Acacia karroo is a pioneer, i.e. it is one of the first trees to colonise a bare area. In deforested areas, particularly around old mines where the trees have been burnt in the refining processes or harvested as props, Acacia karroo (and Dichrostachys cinerea) are pioneer species that enrich the soil by fixing atmospheric nitrogen. This species has a short lifespan, around 30 years, it is then replaced by other species taking advantage of the pioneer soil enrichment. 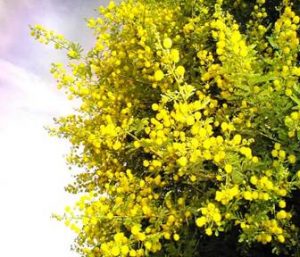 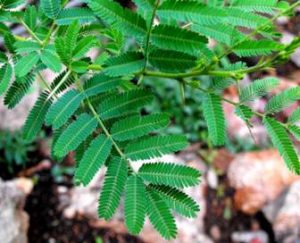 Acacia karroo is a pretty tree with a dense rounded canopy, branching lower than most. The bark is very dark, nearly black and very fissured on old trees but smoother with an orange tinge on new growth. The thorns are long, straight, paired at the nodes, white with a brown tip.

The leaves are compound, twice pinnate with two to five (sometime more) pairs of pinnae, each with 20 pairs of dark green leaflets. The flowers are globose, bright yellow and grow profusely at the end of the season’s new growth. The pods are slender, sickle shaped, hanging in bunches, becoming dehiscent and twisted before falling. 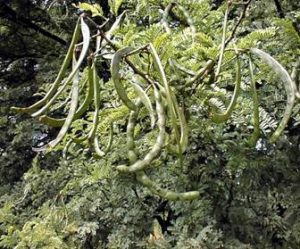 You will all have heard of Gum Arabic which is the sap of Acacia senegal and is used in the pharmaceutical industry, in sweets, adhesives and others commercial products. Less known and to this day little exploited is the sap exuded by Acacia karroo. In Bulawayo we had a beautiful old specimen of A. karroo and when the tree was exuding sap the children always enjoyed eating it. The gum is sometimes collected and sold as a substitute for Gum Arabic – Bio-Innovation Zimbabwe, a local NGO, is progressing this work. I feel that with a bit of assisted selection and possibly the creation of a hybrid we could generate a tree that, apart from its many virtues in agro-forestry and forage, could also give us more abundant gum.

Its medicinal uses are varied: an infusion of the roots is used by Ndebele healers for general body pains and by the Shona for dizziness, convulsion, gonorrhoea, and, not surprisingly, the ubiquitous aphrodisiac.

The tree is fast growing and produces a wood that makes a good firewood, very hot and relatively smokeless. Otherwise the wood is very susceptible to borers and other insect damage. Its main virtues in the bush (where it indicates the presence sweet veld suitable for cattle grazing) is the value of its foliage and pods as forage, its red-gold gum relished by monkeys and bush-babies, the pollen of its flowers for honey bees and its use by the edible caterpillar of the Emperor Moth (amacimbi).

Fifteen members of the Tree Society assembled by Buckland Road just past Wild Geese, off the Alpes Road, North of Harare. It was a typical bright sunny mid-winter’s day, warm in the sun, but quite chilly in the shade. Although the land was dry, the outing proved to be very interesting, thus showing how noteworthy finds can still be made in areas close to Harare.

Having driven a short distance and parked, we set off down into a valley with a stream at the bottom with Meg at the helm. We were joined by Bob Warren-Codrington who was able to give us local details about the area and the land use. At this stage we were walking through regrowth miombo woodland and there was nothing particularly remarkable. However, by the stream, there were a number of interesting species.

One was a copiously-fruiting small tree of Maesa lanceolata (the False Assegai Tree). This is a higher-rainfall species in Zimbabwe and is a particularly common species in the Eastern Highlands where it occurs on forest margins and by streams. However, it is not common near Harare; there are no records from places like Cleveland Dam or the Mukuvisi Woodlands. We do have records from Chakoma to the NE of Harare and one rather odd record on the hill behind St George’s College. Maesa bears numerous small white to pale yellow flowers in axillary panicles; at this stage, it was covered in small green berries.

Also by the stream was Rhamnus prinoides (the Shiny Leaf) and sprawling on it some canes of Rubus niveus, the Ceylon Raspberry, a native of Asia. This species has white undersides to the leaves and white stems.

Further down the stream, we went through a fence, skirted some cattle, crossing on to Teviotdale Farm. The valley had a number of weedy species in it, Guavas, some fine Bugweeds (Solanum mauritianum) and the highly invasive Grey Poplar hybrid (Populus × canescens) forming large colonies of spindly unbranched stems.

As we returned up the stream, we came across an orange-flowered herbaceous Apocynaceae growing in the stream bed. This was something I had never seen before but it looked to me like an unusual-coloured form of Asclepias curassavica, a widely cultivated plant usually with bicoloured flowers. However, I had never seen it as well -naturalised as this. Specimens were sent to the Apocynaceae expert, Dr David Goyder, at Kew who confirmed the name.

We then walked back up the hill and moved our cars to by the dam, where we had our lunch.  After lunch, we did a short walk and in the riverine forest below the dam, we came across a most unexpected species, Scolopia zeyheri, the Thorn Pear. I have only seen this species on one prior occasion: it grew in the Harare garden of the late Dr Peter Iliff not far from BS Leon. There is also an old record made by George Hall in the Mukuvisi Woodland. The tree used to be placed in the family Flacourtiaceae (now it is in Salicaceae) and the leaves somewhat resemble those of Dovyalis zeyheri, but the fruits of Scolopia are small red berries and totally different from the Dovyalis. One feature of the Scolopia is that if you fold a leaf and unfold it, it leaves a grey line. Maytenus undata also has this feature. This particular tree had large spines on the old branches and on the trunk.

Nearby was a Syzygium with unusually large dark green leaves. This caused a fair amount of debate; was it Syzygium guineense subsp. afromontanum or a cultivated species. This question remains unresolved.

In magnificent flower was a Gymnosporia senegalensis (the Confetti Tree). This is a winter-flowering species and bears numerous small flowers in dense inflorescences. So many petals can fall under the tree that it may resemble a confetti storm. A short walk away were two intertwined trees, a Syzygium cordatum ((the Waterberry) bearing a Ficus burkei (the Common Wild Fig); the fig already considerably larger than its support. Also nearby in the grassland was a small specimen of Faidherbia albida (the Ana Tree or Apple-ring Acacia). It’s interesting how this species turns up around Harare; it’s obviously far out of its normal low-altitude range. Possibly these plants are planted or maybe they escape from cultivation.

So, it was an interesting day with some unusual records.

Thanks to Meg for leading us and also to Bob for giving us permission to visit and accompanying us on the walk. Thanks also to Mary Lovemore, Tree Society meeting organiser, for her efficient arrangements for the day.

The morning started off pretty cool but soon warmed up as it happens at this time of the year. We had a good turn out with over 23 enthusiasts, most of whom met at the meeting place at Prince Edward School, while the rest went directly to the venue some 100 kms out of town. Amongst those present were a couple of visitors to the country – I hope they enjoyed the day as much as I did!

Once on Hildemara we stopped to botanise at a place just after we crossed below the weir. With so many people present, it was decided to divide the group into two groups with Meg leading the one group and the new Tree Leaders taking on the balance. The new leaders identified all the trees they saw except two – both too high up to get a sample of leaves. The new leaders also used Meg’s updated KEY TO SOME TREES OF THE HIGHVELD AND MIDDLEVELD to identify a couple of trees. This was a group action and appeared to be appreciated by all.

We then adjourned for lunch at the dam site where other species of trees were to be seen – e.g. Bauhinia petersiana, Hexalobus monopetalus, Rhoicissus revoilii and Strychnos potatorum. We had our refreshments at the water’s edge next to the dining room and what a scenic place it is. Unfortunately, the Cullinans left the botanising site early and were inadvertently directed to the camping site and therefore missed the social aspect of the event. Carrie Lapham was the last to leave the botanising site and was also lost for quite a while. Moral of the story – check if there are people behind you before leaving, stay together and don’t lose out!

Only one person wanted to botanise after lunch, so we didn’t – just as well as we only got back into town late in the afternoon! Thanks to Mary for organizing the event and providing name tags. 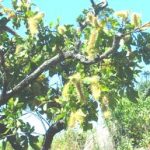 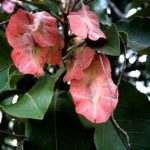