Sunday No 16th (3rd Sun.):  Lake Chivero Bird Sanctuary. We will meet at Prince Edward School car park at 0830 hours, for a prompt 0845 hours departure. Bring your lunch, drinks and a chair as well as walking shoes, a hat and sunblock.

Etymology:   The generic name Combretum is derived from the name given by Pliny to a climbing plant, the identity of which has been lost in time. Just to refresh your memory

Gaius Plinius Secundus (AD 23 –AD 79), better known as Pliny the Elder, was a Roman author, naturalist and natural philosopher as well as naval and army commander of the early Roman Empire, spending most of his spare time studying, writing or investigating natural and geographic phenomena in the field, he wrote an encyclopedic  work: “Naturalis Historia” which became a model for all other encyclopedias. 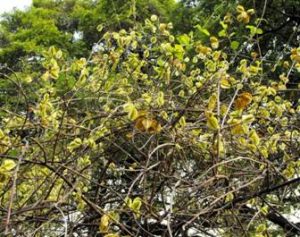 The Combretaceae family comprises the genera Combretum and Terminalia. In the Southern African region there are 60 different Combretums of which 23 can be found in Zimbabwe. They are also known as the bushwillows, the reason why is a bit of a mystery, as they certainly do not look like willows.

Combretum mossambicense favours the lower and hotter areas of the region. It generally grows as a deciduous knobby creeper with long grey trailing branches and it often climbs other trees as well. It can however grow as a bush or small tree three to 4 m in height. 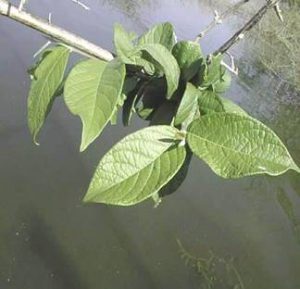 The leaves are opposite, elliptic-oblong, averaging 6 cm x 4.5 cm but variable and can sometimes be nearly circular. The lateral veins are indented above and prominent below giving the leaves an attractive quilted look. 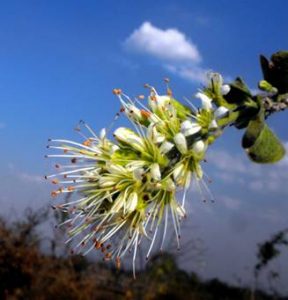 The flowers are very attractive and sweetly scented; they appear from August to November and their shaving-bush appearance gives the climber its name. The fruits mostly have five wings but sometimes only four.

Many wild animals browse this plant; it is also larval food for the Guinea-fowl and Striped Policeman butterflies (Humanumida daedalus and Coeliades forestan). The flowers attract many insects which in turn attracts birds, notably the brown hooded Kingfisher (Halcyon albiventris). 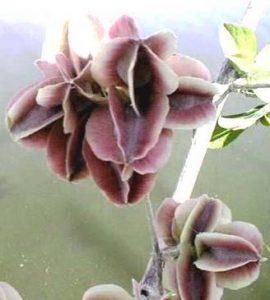 On the medicinal side the roots and leaves are crushed and boiled with some species of Acalypha. The steam from the liquid is then used to reduce swelling like tooth abscess or swelling of other body parts. The liquid or the dregs are also used directly on inflamed scratches and wounds.

Canonkopje is about a 2-hour drive from Harare, on the far side of the Great Dyke near Mutoroshanga.  It is a beautiful kopje-studded property that contains a wildlife conservancy and a wattled crane sanctuary and belongs to the Hangartner family.  The Tree Society has visited Canonkopje several times in the past, the last time in February this year when members spent time at the foot of Chivarairwa kopje, near the house.  This time we wanted to find one of the swamp forests – there are three on the property.

The group this time was made up of 12 members and four visitors.  Because the particular swamp forest for which we were headed (on the Draai River) was quite some distance from the house and because the Tree Society is renowned for its slow progress through the bush, we set off in cars to the north-eastern side of the property.  We were ably guided by two Conservancy staff, Jerasi Kawundura and Canaan Kaputen, who were keen to know if we agreed with the tree names they had been given in the past.  On crossing the first dam we saw four of the wattled cranes that had been released from captivity, two previously and three more recently.  One of the first pair had been taken by a crocodile in the dam, so we hoped the remaining birds would survive and that the one survivor would take to his new mate. Further away from the house we passed a herd of zebra and several groups of impala, as well as some kudu and a long-crested eagle in the distance.  As the Conservancy contains no dangerous animals, we didn’t need to worry about walking in the bush.

We parked below one of the windmills and set off towards the swamp forest.  On the way we stopped to discuss suffrutices – those plants that, because most of their biomass is hidden under the soil, form what well-known botanist Frank White called the ‘underground forests of Africa’.  Our example this time was Lannea edulis, with its juicy-looking red berries.  Nearby in a clump of bushes and trees we found Ziziphus abyssinica, which has indented veins on the upper surface and an under-surface with furry hairs that makes it distinguishable from the more common Z. mucronata.  Nearby we found Searsea (ex-Rhus) longipes with its trifoliate leaves and flowers on branched spikes, together with Diospyros lycioides, the Red star apple. Nearby, very helpfully, we saw the ripe fruit of the Diospyros, with its calyces protruding in a star behind the red fruits, showing us that it had been very appropriately named. 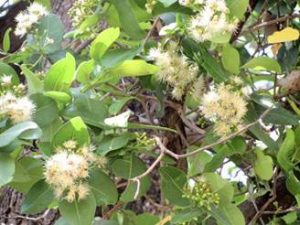 On the edge of the swamp forest proper we came across our first example of Syzygium spp. (the waterberries), which make up the majority of the forest.  Meg and Mark agreed that this Syzygium was not S. cordatum as the staff had been told, but rather S. intermedia because the leaves have a very distinct petiole.  There is some debate about the existence of S. intermedia in botanical circles, so this might have been the reason for the different name.   These trees have roundish, shiny green leaves and the closely-growing branches had just come into new pale green leaf so the swamp forest was delightfully cool after the warm sun outside.  The ground was covered in a thick layer of last year’s leaves, so we scrunched our way between the fallen trunks and the boggy patches.  At this dry time of year the forest floor was relatively dry, in the wet season it would have been impassable. 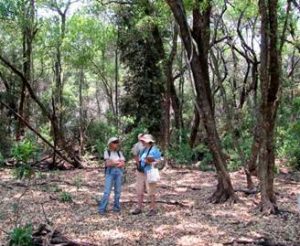 delightfully cool in the swamp forest

Amongst the shrubs in the sub-canopy we found another typical riverine species, Euclea schimperi, which has shiny green pointed leaves that are opposite except for the top three.  The new leaves of this species are rusty.  We kept a look-out for E. divinorum but found it wasn’t sympatric with E. schimperi although we did find E. natalensis.  Further in we found Englerophytum magalismontanum, which in the past I had always been happy to remember as Bequaertiodendron magalismontanum.  This specimen was small but later we found a very large, tall specimen that had grown up, up, up, to the light.  This species has dark green, shiny leaves with a milky sap and a petiole that looks as if it has been stuck on to the back of the leaf.

Some of the trees were difficult to identify from the ground because their canopies were more than 5m up, but the figs were easy, Ficus burkei, F. ingens and F. sur and Jerasi climbed an Apodytes dimidiata to make sure.  We also found Gymnosporia (ex-Maytenus) buxifolia with its straight spines, Erythococea trichogyne, Carissa edulis, and Nuxia oppositifolia. The forest was dense but with relatively few species, being dominated by Syzygium.

On our way back to the cars we found Adenia gummifera, a savanna climber. The last specimens in this part of the Conservancy were Gardenia ternifolia and Sphenostylis erecta, another suffrutex.  So we started and ended our walk with suffrutices.

By this time it was very warm outside the swamp forest and nearly 1pm, so we returned to the house for a welcome lunch and drink, where Alex Hangartner joined us.  The drive back was along the fence-line with the neighbouring property, where we were lucky enough to see an oribi, and we were aware of the enormous amount of work involved in maintaining the roads and waterways in the good working condition that had always been Rolf Hangartner’s trade mark.  His life’s work does him credit.

After lunch a few remaining members returned to botanise at the base of Chivarairwa kopje near the house, but only for a short time before heading home.  I travelled with Rolf Chenaux-Repond who has been a long-time friend of Rolf Hangartner’s, so he knew the environs well.  He took me back through Mutoroshanga and over the Dyke near Caesar Mine, returning to Harare on the Mazowe Road, which was a very pretty, much less busy return to town.

For the last few months, we have adopted a central meeting point and the sharing of vehicles for the longer outings.  I would like to further discuss this arrangement which has long been used by other Societies, such as Birdlife.

From a leader’s point of view, this is great as the botanising can begin immediately – no need to wait until there are sufficient numbers. While on this subject, it would be considerate of members to all arrive at local venues on time as much of possible – the host would not have to attend to the gate for a lengthy period.

Anyone who has had a look at our website recently will agree that it is outdated and needs a completely new look.  This is something the committee has been debating for quite some time.  Is there anyone amongst our members who is a web ‘fundi’ and who could work on updating the site for us?  Please contact Mark Hyde if you are interested. 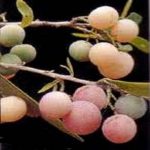 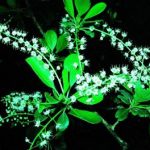