Sunday Oct. 19th (3rd Sun.) OUTING TO RUTH KILNER’S PROPERTY. This is a farm near Bindura and is a new area for the Tree Society. We will meet at CABS Head Office at Northridge Park in Borrowdale at 7.30 am, for a prompt 7.45 departure.

Bring your lunch, drinks and a chair as well as walking shoes, a hat and sunblock. 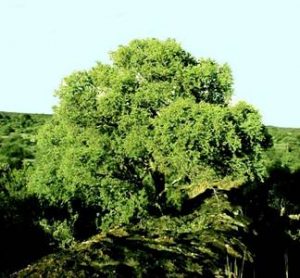 In Zimbabwe the genus Boscia consists of Boscia albitrunca, Boscia foetida, Boscia salicifolia and Boscia augustifolia, the last two can be found around Harare but B. albitrunca and B. foetida prefer the semi-arid soils found around the Tuli and Sentinel areas.

Boscia albitrunca is a medium sized tree reaching some 7 m.  It has a beautiful very dense roundish crown, a most attractive feature to  man  and  beast in the very hot and dry areas it favours. The trunk and branches are light grey to white. 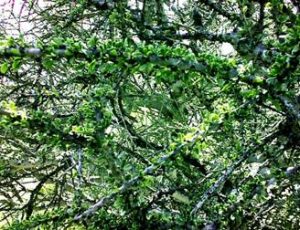 The leaves are elliptic to oblanceolate but a striking feature is the variability in leaf sizes from one tree to another: a surface area that ranges from 0.6 to 7.5 cm2 (excluding coppices which tend to have larger leaves).

Another interesting feature is that the leaves grow in little groups of 2 to 4 on spiky spur branchlets. Many trees in dryer areas have this tendency of growing their leaves shyly, keeping close to home and only venturing out once they are confident of a good spell. The leaves are anything from greyish-green to a fresh much lighter green depending on environmental conditions.

The leaves are browsed by wild animals and cattle alike, it provides a good fodder particularly in times of drought. In Namibia, incisions are made in the trunk so that the tree can be bent and also to force new growth at that point which is within reach of domestic animals. 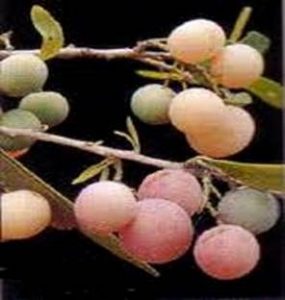 The yellowish flowers have no petals but have a mass of very sweet smelling stamens, once again growing on very short spur branchlets (Aug to October). The fruit is around 10 mm in diameter, yellowish – orange and hairless. The tree fruits from October to December.

The tree has a number of traditional uses:  the dried root-bark is pounded and boiled with water and used as a coffee substitute; a beer is made with pounded fresh root which is fermented with sugar overnight; cold drinks are made from the pounded roots; and the powdery meal obtained from the roots will keep for a long time and can be made into coarse bread. The root, after boiling and concentrating, is said to yield a syrup and the fruit pulp can be preserved as jam or syrup or jellies.  The pickled flower buds may be used instead of capers. In Botswana, the trunk of old trees are often hollow, they fill with water when there is rain and Bushman use this water when needed.

It is said that if the fruits on the tree wither before the millet crop is ripe, the harvest will be a failure. It is also said that if the wood is burnt the cattle will only produce bull calves. The wood is heavy and tough but is only used for household utensils.

This was a new venue for the Tree Society and the instructions on how to find the place proved to be challenging, to say the least. One problem was the mention of a sign to Manda when there was no sign and secondly confusion as to whether we needed to turn off to the right to the left. Re-reading the instructions now, it’s clear that the instructions do not actually state this important fact.  Fortunately, we had been given a number to contact and I arrived to find a huddle of Tree Society members on the phone trying to clarify the instructions. It turned out that we had gone a bit too far and having ascertained there was no sign we found the entrance track without too much difficulty. There’s very little marking the place and the track is no more than a track.  This unfortunate start delayed us for quite a while. I left Meg in charge of the group while I headed back to stand by the road to assist any latecomers. 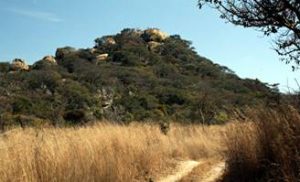 Road up to Manda Hills

However, once we were there, Manda Hills turned out to be a very pleasant venue indeed. The little track takes you up slightly into typical rocky kopje vegetation with a nice variety of species.  Amongst the trees seen were Englerophyton magalismontanum, the Stem-fruit which bears flowers and fruits on the old wood. Its distinctive narrow leaves are paler beneath. This is often a rocky kopje species and also a riverine one, these habitats often containing similar species.

We also saw Maytenus undata, the Koko tree and practiced folding the leaf to reveal the characteristic waxy bloom on the leaf surface.  A slightly more unusual species, from the coffee family, was Rothmannia fischeri subsp. fischeri, the Woodland Rothmannia.  Recognisable by the usual opposite leaves and interpetiolar stipules, this species also has very distinctive domatia in the axils of the main veins beneath. On the upper surface, corresponding to the pit beneath, is a raised dome, a tiny but quite distinctive feature of the leaf.

This is known as the Woodland Rothmannia because in Zimbabwe at least it is the only species which is not associated with forests. In flower, it is quite attractive with cream-coloured flowers with darker markings; these were however not visible in August.  In the same area was Hexalobus monopetalus, the Baboon’s breakfast. This has simple alternate leaves arranged, more or less, in a plane. Annonaceae can usually be recognised by the leaves being slightly aromatic when crushed and also in lacking stipules and this was true in this case.

Also in the rocky assemblage of species was Diospyros natalensis subsp. nummularia, the Acorn jackal-berry. This is a distinctive species with its small, almost circular dark green leaves and it usually occurs in the deepest shade amongst rocks.  Also present was Bridelia mollis, Velvet-leaved Bridelia, and Pouzolzia mixta a non-stinging Urticaceae, known as the Snuggle-leaf or the Soap nettle.

In the herbaceous flora, there was a tallish, unbranched Vernonia which was new to me and is still to be named. Also, on the rocks was a small plant occupying tiny crevices, called Stemodiopsis rivae.

After lunch a somewhat reduced group took a walk in a different direction and we found ourselves on an area of bare rock with a somewhat different tree flora. Commiphora marlothii, Paperbark Commiphora,  Albizia tanganyicensis, the Paperbark Albizia, and Afrocanthium lactescens, Gummy Canthium were present – all quite typical of such rocky habitats.

Also present was a slightly more unusual species, Triaspis macropteron subsp. massaiensis. This has winged fruits which are borne back to back in threes. At first glance you might think it was a Combretum, but the arrangement is actually quite different. It is a rather local climbing species from the small family Malpighiaceae and is only occasionally seen on our outings.

Once again, it was an interesting day and a return visit, perhaps in the rainy season, would be of interest.  I would like to thank the owners of Manda Hills for giving us permission to visit; next time we should have no problem with the directions.

For the last few months, we have adopted a central meeting point and the sharing of vehicles for the longer outings.  I would like to further discuss this arrangement which has long been used by other Societies, such as Birdlife.

From a leader’s point of view, this is great as the botanising can begin immediately – no need to wait until there are sufficient numbers. While on this subject, it would be considerate of members to all arrive at local venues on time as much as possible – the host would not have to attend to the gate for a lengthy period. 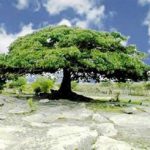 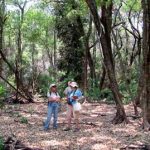