Sunday, 16th March: Outing to MacDonald Timbers, Ruwa.  This is a return visit to Kim McDonald’s farm near Ruwa which we visited in April last year. Directions: Take the Mutare Road in the direction of Ruwa. Before you get to the township itself you will see a large TM Supermarket complex on the right. Note that this is some way back from the road – keep a sharp lookout. Turn right at TM, and 2nd left after about 800 metres, then 3rd right, again after a short distance and proceed straight to the farm. If you should get lost, ring Kim on 0775 009429 or Mark on 0772 233751. We will meet at 09.30 as usual. Bring all that you need for lunch, plus hats, chairs and tables.

A new baobab species Adansonia kilima, called the Kilima or Mountain Baobab, has recently been claimed to be co-existing with A. digitata in southern Africa by an Australian academic who co-authored a paper about it online in early 2013.  The paper, authored by eight people, describes the difference between the two species.  The proposed new species is said to be diploid (having 22 chromosomes) rather than being tetraploid (having 44 chromosomes, i.e. having twice the amount of genetic material) like its relative that we all know so well. The Kilima baobab is said to grow at higher elevations than A. digitata, between 650-1500m.

Dr Sarah Venter, who recently completed her PhD on baobabs in Venda (just south of the Limpopo River in South Africa), says that the distinction between flower size and fruit size is not as clear as described by Pettigrew et al. and therefore it may be difficult to tell the species apart.  She also cautioned that the existence of the Kilima baobab is still a theory.  It still needs to go through the rigors of scientific questioning and testing before it becomes established and accepted.  So far it is a controversial finding and needs more investigation, but because the theory is based on chromosome number and DNA sequencing, it has more credibility.

In Zimbabwe the family Ebenaceae includes 14 species of Diospyros and 6 species of Euclea: Euclea crispa, Euclea divinorum, Euclea linearis, Euclea schimperi, Euclea undulata and Euclea natalensis.  This last species is further divided into 7 sub-species. In Zimbabwe we are mostly concerned with sub-species acutifolia which is widespread although there is the local subsp. angustifolia which occurs only in the south of the country. 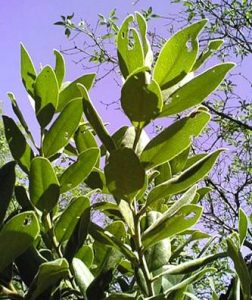 Euclea natalensis is a shrub or small tree, 4 to 10 m tall, with a dense spreading crown. Under good conditions it can grow into a tree 12 to 18 m in height.  The tree is usually single stemmed, the bark is dark grey, thin and finely cracked.

The branchlets are covered in fine rusty hairs, becoming smooth in older specimens. The leaves are hard and leathery, shiny dark green above with the lower surface covered with rusty coloured hair giving the underside of the leaf that very characteristic dirty green look. The veins are prominent particularly on the top. The leaves are arranged spirally and are very variable in both shape and size, sometimes as long as 12 cm and 5 cm wide. 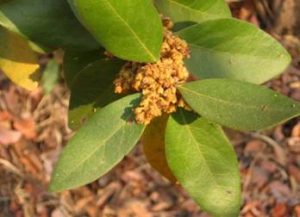 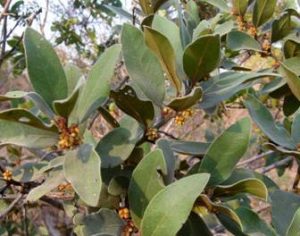 Euclea natalensis is dioecious, the male and female flowers therefore are borne on different trees. They are small, bell shaped, cream to yellow, borne in profusion in the axils of the leaves.  They have a very sweet scent.

The fruit is an edible fleshy berry, very attractive to birds, monkeys and people. It is round, 7-10 mm in diameter, almost hairless, red becoming black, in branched sprays up to 3,5 cm long (Oct.-Jun.). 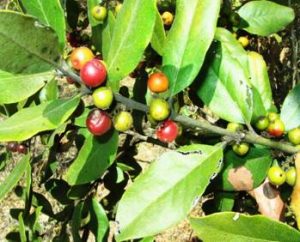 Like all Ebenaceae, the wood of Euclea natalensis is hard, its most popular use is the making of  toothbrushes (at least in Matabeleland and Kwa-zulu Natal). Because it does not generally grow very big the wood is also used in the making of small articles of furniture, tool handles and the like.

The tree has medicinal uses, even though Gelfand et al. do not mention any in Zimbabwe.  The tree roots and bark have the usual attributes to treat the most diverse complaints but, there again, faith is a powerful healer. More interestingly, the roots are boiled to make a black dye. On a more traditional note, and even though as an Ebenaceae it would burn long and well, the wood is not used as a fire-wood. Investigating a bit deeper I found that one of the Zulu names for Euclea natalensis is “ichithamuzi”. Now this is not specifically a tree name, it means ” the destroyer” and burning such wood would cause dissention and possibly divorce in the kraal (interestingly enough L.J. Mullin retains that name as the only Ndebele name for Philenoptera violacea (Lonchocarpus capassa), in preference to Dungamuzi or Ipanda, which are quoted  in other texts. How many other trees can become “ichitamuzi” (i.e: destroyer) in various locations, is not known but could form the subject of an interesting investigation. 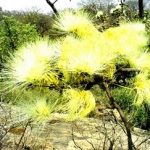 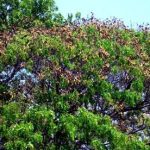