Sunday, 16th February:  Visit to Canon Kopje, by kind permission of Rolf Hangartner. The Crane and Game Sanctuary near Mutorashanga was established in 1993 to protect biodiversity and to breed the endangered wattled crane for re-introduction into the wild. At the Crane Centre there are now 12 crane pens to house the breeding pairs, an incubator and a museum. The savannah grasslands and woodlands of the game sanctuary hold giraffe, sable, kudu, eland, oribi, zebra, wildebeest, impala, reedbuck, duiker, steenbok, warthog and bushpig, as well as antbears, porcupine, pangolin, civet and serval living amongst the impressive granite kopjes that are filled with intriguing rock art and archaeological artefacts.

NB: Because of the long distance to Canon Kopje we recommend that you allow up to 2 hours for travelling. We also recommend that people share transport. Please contact Mark Hyde if you would like transport or can offer it to others.

Saturday 22nd February: OUTING TO THE STEINDL’s PROPERTY, MANDARA, by kind permission of Rudi and Barbara. This month’s Saturday afternoon walk takes place in the Steindl’s garden in Mandara. There are both native and exotic trees and flowers to be seen and we will have an interesting afternoon.

Congratulations to Meg Coates Palgrave for being awarded the Marloth Medal by the Botanical Society of South Africa.  The announcement was made by Ted Oliver at the final plenary session of the AETFAT (The Association for the Taxonomic Study of the Flora of Tropical Africa) congress in Stellenbosch in January.  This is important recognition for all the work that Meg has done, and continues to do, on the flora of southern Africa.
This medal is awarded to any amateur or professional botanist who has produced scientific literature of a popular nature to stimulate public interest in the indigenous flora of southern Africa.  The medal commemorates Dr Rudolph Marloth, a pharmacist, analytical chemist and botanist who published much on the South Africa flora, the most famous publication being his Flora of South Africa, which appeared in six magnificently illustrated volumes between 1913 and 1932.

TREE OF THE MONTH:  Albizia tanganyicensis 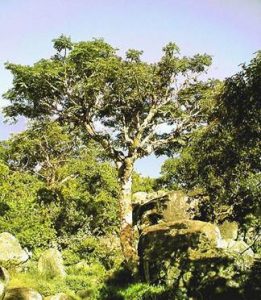 The genus Fabaceae or, using the more descriptive name, the Leguminosae is a huge group that contains virtually all plants that bear legumes, that is a bean shaped fruit. The family is so large that is a been sub-divided in three : the Mimosoideae where the flowers have reduced or no petals ( mimosa-like); the Papilionoideae  with flowers the shape of butterfly (i.e. papillon in French) and the Caesalpinioideae where petals are seldom absent and often showy.

Albizia tanganyicensis is typical of drier areas of Zimbabwe; it is generally found in small groups in rocky outcrops but never forms dominant stands. In the Matopos there are several beautiful spots around Efifi and Diana’s Pool where they absolutely thrive. They can be even more striking in winter when the pods and the peeling bark become particularly dramatic.

The generic name Albizia refers to the Italian nobleman Filippo degli Albizzi, who in the mid-18th century introduced the genus to Europe.  The specific name tanganyicensis  means `from Tanganyika’, where the tree was first identified.

The bark is very distinctive, being smooth, creamy white and peeling in large papery sheets. The underbark is a very attractive greenish opal colour. 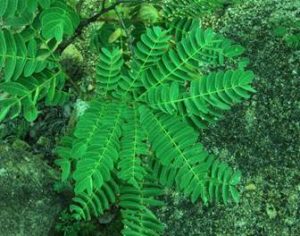 The leaves: are bipinnate with two to six pairs of pinnae, each bearing five to 13 pairs of leaflets. The leaflets are oblong, 1,2 to 4 x 0,7 to 1,2 cm in size. They are light green with a tapering apex and, as with most of the Albizias, the base is asymmetric and there is a conspicuous gland at the base of the petiole.

The tree flowers from August to October.  The flowers are globose, half-spherical and creamy-white. The pod is dark brown, very long and thin (up to 30 cm long). 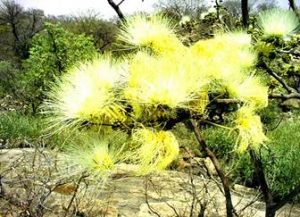 The wood of Albizia tanganyicensis is light and not very durable. Because of its lightness it is used for fishing net floats. It can also be useful in modelling.

Despite the threatening clouds eleven members attended this interesting outing: JP & Vicky, John & Dagmar, Jan, Tony, Richard, Mary, Graham, Zilla and Dave (leading).  The views on the way in were beautiful, everything being lush and fresh green.  Fortunately the weather held off in our area so we were able to enjoy the wonderful variety of tree and plant life there, even if we couldn’t identify a few things (in the absence of the usual fundies!). 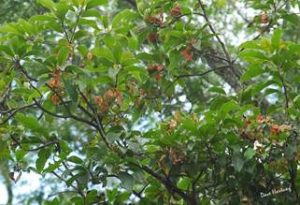 At lunchtime all agreed we’d had a great ‘fun’ morning with much enjoyable discussion. Forty-one typical miombo species were noted with reasonable confidence, including the two species of Faurea – saligna and rocehtiana (ex. speciosa); a very large Bobgunnia (ex. Swartzia) madagascariensis;and after much head-scratching a Strychnos spinosa; as well as a couple of unidentified epiphytic orchids. 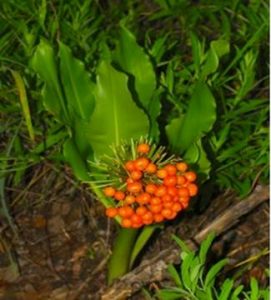 The photos show Terminalia stenostachya and Scadoxus (Haemanthus) multiflorus in fruit that were also seen on the walk. 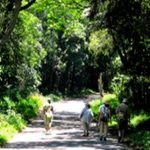 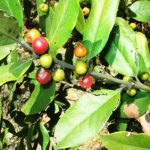