Kim McDonald has invited us to his “farm” where he has planted a variety of indigenous trees and tried to create a riverine forest and he would like us to identify other trees.  We will meet at 0930 as usual. Bring all that you need for lunch, plus hats, chairs and tables.

They have lots of very interesting trees, and Vicky has kindly offered us all tea so this should be a popular outing!!  We will meet as usual at 1430 hrs

A reminder that the 63rd Annual General Meeting of the Tree Society of Zimbabwe will be held at the Education Centre, Mukuvisi Woodlands on Sunday 19th May 2012 at 9.30 am.

Any proposals/resolutions and nominations for office bearers (and any volunteers to be on the Committee) should be forwarded to the Secretary Teig Howson at teig.howson@gmail.com by Sunday 5th May if possible, although proposals and nominations will be accepted from the floor.

The family Sapindaceae comprises around 1500 species, mostly from tropical and high rainfall areas. The plant characteristics that dictate the classification as Sapindaceae are rather obscure, at least to me.

Pappea is named after a German physician and plant collector Carl Pappe, while the specific name capensis refers to the Cape area. 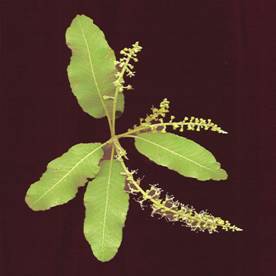 The family is represented in Zimbabwe by Allophylus africanus, (the African false Rhus, but perhaps it has now become the African false Searsia); Dodonaea viscosa, the Sand Olive; Erythrophysa transvaalensis, the Bushveld red balloon which, to my knowledge, occurs only in the vicinity of the Khami Ruins in Bulawayo), Lecaniodiscus fraxinifolius,  the River Litchi, which we saw at Hippo pools, Zahna africana, growing at Christonbank, and our Pappea capensis whose distribution is widespread but never dominant.

The tree is of medium size, anything from 3 to 10 m or more, mostly single stemmed but can also be multi-stemmed . The bark is relatively smooth and grey. The leaves are simple and spiralled, mostly crowded at the ends of the branchlets. The mature leaves are mostly entire, but younger leaves tend to be conspicuously and closely toothed. The one characteristic that seems to be consistent is the numerous parallel lateral veins that split into a Y before reaching the margin. The leaves are rough to the touch, wavy and oblong. 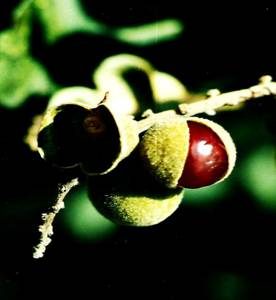 The flowers are greenish, male and female flowers are borne on separate trees as catkins in the axils of the leaves. The pericarp is round, green and velvety and splits open to reveal a bright red flesh with a dark brown to black seeds imbedded within. When in fruit the display is really magnificent. Unfortunately, certainly in Matabeleland, the fruiting is irregular and sometimes it would appear that no flowers are produced at all. Otherwise the fruit is delicious and can be made into a tasty jelly. I knew trees at Hillside and at CBC that never bore fruits, but I also knew a particular tree near Ncema which produced masses of fruits that I collected to make jelly. I believe that the fruit can also be used to make wine and even vinegar. The seed itself is the source of a fine oil and could be exploited to make bio-diesel. In Bulawayo the most famous one is certainly the Indaba Tree that is growing in Lobengula’s kraal (now State House). 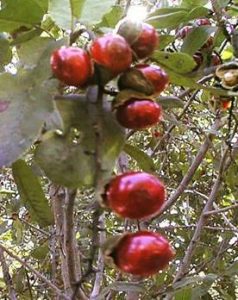 The tree, apart from being attractive to birds when in fruit, is also browsed by many species of game and domestic cattle and is the larval food for some charaxes butterflies. Its medicinal uses are as usual many. A leaf infusion can be used for multiple eye problems and nose bleeding, while the bark is used for prevention of witchcraft and an infusion of the root is used as an aphrodisiac.

It has been a while since we last visited Mick Fleet’s cottage in Umwinsidale. The area itself is miombo woodland with an interesting understorey of shrubs and herbaceous plants.

One interesting plant seen right at the start was a weed, a composite (Asteraceae), with yellow flowers and milky sap. I have seen this before at Aberfoyle in the Honde Valley and again in Mike Kimberley’s garden in Mount Pleasant. Here it was again. Unfortunately it remains unidentified. We did think it might be a species of Youngia but the specimens in the Herbarium were not a good enough match.

We did the usual circuit of the small hill, looking at Pittosporum viridiflorum, Lannea edulis, the Velcro bush, Pseudarthria hookeri;  and the large leaves of Inula glomerata. Various weeds had colonised the path edge, including Silverleaf, (Desmodium uncinatum).

In the woodland were large patches of non-flowering stems of Plectranthus esculentus. This labiate produces yellow flowers in the hot dry season while in the summer months one only finds whippy stems bearing opposite leaves with no flowers at all, which is rather puzzling.

After the walk, Mick very kindly provided us with tea and cake, a splendid end to a very pleasant afternoon.

The dry, spiny forests of southern Madagascar comprise one of the most unique ecosystems in the world, but they are becoming increasingly endangered as residents of the arid, food-insecure region cut down trees to make way for cultivation and to produce charcoal.

In an effort to slow the rapid deforestation and to address chronic food insecurity, the World Food Programme (WFP), in partnership with the World Wildlife Fund (WWF), is replanting 1,000 hectares of trees through food-for-work projects reaching 60,000 beneficiaries.

When a chief in Amboasary Sud District asked residents of the small town of Ankirikiriky if they would help replant the surrounding forest, the townspeople readily agreed. They knew it was good for the environment and it would also provide them with wood for construction and to make charcoal. In the past they had just cut the trees, but these took 15 years to regenerate. According to a November 2012 WFP assessment, 676,000 people in the region are at risk of severe food insecurity during the lean seasons. The food-for-work project offers 2.4kg of maize and beans in return for five hours of tree planting.

People in the area remember before the political crisis in 2009, when such projects did not exist. For example, in 2006 when there the rains failed the local population had no food, but the more recent food-for-work projects mean they can earn some food during the hard times.

With guidance from WWF, the townspeople have divided up the unused or depleted land in their area into different parcels for planting, restoration and exploitation, an approach that reduces deforestation while allowing local people with limited sources of fuel or income to continue making charcoal. They are planting Alluaudia procera, the Octopus Tree, known locally as Fantsiolitse, a spiny plant endemic to the South of Madagascar that local communities rely on for both construction and charcoal production. About 80 trees are used to build a house, while four big trees are needed to produce one bag of charcoal.

In Anjanahasoa Village, which is next to Andohahela, a dwindling National Park, villagers organised a replanting effort after a forest fire destroyed most of the surrounding vegetation. The villagers recognised that they would have no trees to make into charcoal if they did not replant. The villagers are the first generation to plant trees – their ancestors never needed to plant trees because the forests were still plentiful then, but the present generation can foresee a future problem if they do not begin to replace the resource now. To boost their efforts WFP has introduced its food-for-work programme in the area. In this village, each family has agreed to plant 30 saplings per year. A nearby hillside is now covered in Fantsiolitse saplings.

Although unable to reverse the deforestation, the WFP project aims to slow its rate and protect livelihoods that are threatened by the destruction of the forest. The region has become drier and its soil less fertile as more forest has been cleared, factors that have contributed to declining production among local subsistence farmers.

This type of project takes some of the pressure off the forest, but also helps people to survive by increasing their food security. The reforestation activities try to restore the communities’ livelihoods, while the WFP-provided food contributes to food consumption during the lean season, when many households eat only once a day. The local people prefer to earn the food because there is more dignity in this than receiving hand-outs.

Before Madagascar plunged into political crisis after the coup d’etat in 2009, many farmers in the region went to the cities to find work during the lean season. But the crisis has damaged the Malagasy economy and work is now scarce.

Plans by WFP to expand its food-for-work programme into more areas in need of replanting have been put on hold due to a funding shortfall. 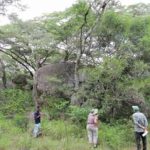 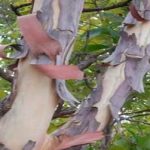