Saturday March 16th (NB not 17th because of the outing to Mavhuradonha the next weekend): Outing to Mick Fleet’s garden in Umwinzidale.  We will meet at 1430 hours.

Thursday 21st March – Sunday 24th March: Mavhuradonha – for those who have booked with Bill Clarke.

Notice of the Annual General Meeting of the Tree Society

Notice is hereby given that the 63rd Annual General Meeting of the Tree Society of Zimbabwe will be held at the Education Centre, Mukuvisi Woodlands on Sunday 19th May 2012 at 9.30 am.

Any proposals/resolutions and nominations for office bearers (and any volunteers to be on the Committee) should be forwarded to the Secretary Teig Howson at teig.howson@gmail.com by Sunday 5th May if possible, although proposals and nominations will be accepted from the floor.

Jean Harington (nee Cutforth) was born on 2nd April 1930 in England.  She came out to Rhodesia in 1957, met Tim Harington, a shy tobacco farmer, and they married in March 1959.   Their children, Joanna, Hugh and Louise followed, with many happy years and many great friends. They built up a wonderful and productive farm in the Victory Block between Mvurwi and Raffingora, giving good employment and care to all those who worked with them. Jean ran the store and developed a complete community with a church and a school.

Jean loved her camping, her fishing with Tim and climbing kopjes, her interest in trees and the bush, her garden and her bridge.  Grandchildren followed and they in turn loved visiting the farm and fishing in the dams which Tim had built.

In 2002 a move became inevitable and so they came to Borrowdale Brooke. Their warmth and hospitality was felt by many friends from the old days but also by new friends who they made through bridge, the Northern Suburbs Garden Club, the Tree Society and the History Society.  Jean and Tim spent many happy Saturdays and Sundays with the Tree Society, going on outings and learning more about trees.

Jean’s life was cut short by a short but fierce battle with cancer.  All her friends, far and wide, will miss Jean’s sparkling blue eyes, her laughter, her zest for living, love of life, brave till the end, always thoughtful and kind. 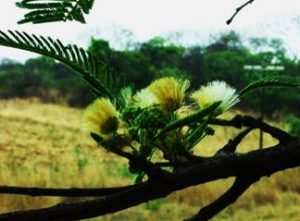 The family Fabaceae, or using the more descriptive name Leguminosae, is a huge group that contains virtually all plants that bear legumes, that is a bean shaped fruit. The family is so large that it has been sub-divided into three : the Mimosoideae, where the flowers have reduced or no petals (mimosa-like); the Papilionoideae, with flowers the shape of a butterfly (i.e. papillion in French) and the Caesalpinioideae, where petals are seldom absent and often showy. 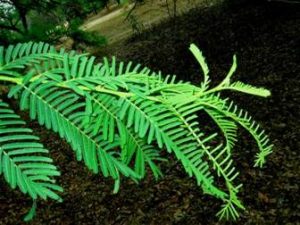 The generic name Albizia  refers to the Italian nobleman Filippo degli Albizzi, who in the mid-18th century introduced the genus to Europe.  Amara is derived from the Latin for bitter or sour. The previous name was Albizia sericocephala, meaning with silky heads. This was confusing as Albizia are Mimosoideae and all have shaving brush-like flowers.

The bark is brown to grey, becoming deeply fissured when old. The young shoots and leaves are velvety with a golden tinge.  All Albizia have bipinnate leaves but A. amara has the smallest leaflets in the genus, about 50 leaflets per pinnae. They are around 4×1 mm in size and are not sickle shaped. in some parts of the country there could be confusion between Albizia amara and A. harveyi which also has small leaflets (around 5mm long but sickle shaped). A distinctive feature of Albizias is the gland found low down on the petiole. 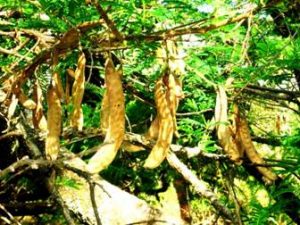 The tree flowers from September to October, the flowers are in globose half-spherical whitish heads sometimes tinged with pink. The fruit is a large pod, brown at maturity but not swollen over each individual seed as we find in A. harveyi.

The wood can be used in furniture-making as it takes a nice lustrous finish. The tree can grow to some 20 m high with bole diameters up to 50cm.  Even though the tree is widespread it is never abundant.

The tree and particularly its roots are used extensively in traditional medicine, including as an aphrodisiac; for constipation, diarrhoea and pneumonia; and more. 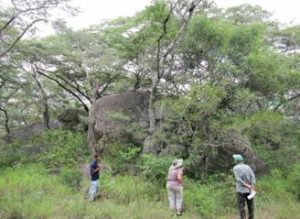 Enjoying the delights on Chedgelow farm

What a delightful spot is this section of Chedgelow, past the quarry and out near the shore of Harava Dam.  Interesting plants, beautiful trees and rocks, surrounded by peace and quiet.  Thirteen Tree Society members came on this outing, a pleasant walk through the very green miombo, led by Meg Coates Palgrave.  Before lunch we found 61 plant species – some were vines and herbaceous plants which we collected for Mark, but most were trees.

We ended the outing with a congenial picnic lunch under the trees. Thanks to Meg for leading, to Mary Lovemore for organising the outing, and to Silver for looking after the cars.

Nine people attended this outing, one of whom is a potential new member as she is starting a nursery and wants to learn about indigenous trees.

In Mark’s absence I asked Rhett to show us around, which proved extremely interesting in view of his broad knowledge and keen interest.  The 10-acre (4 hectare) property boasts 160 species of indigenous trees, mostly planted by Rhett, starting some 30 years ago when he first cleared out all the Eucalypts and most of the Jacarandas which the previous owners had planted. Rhett has recorded about 150 species of birds and a similar number of butterflies in the garden; his current pursuit is moths of which he has so far identified 350 species and expects to end up with over 500!

Naturally many of the trees we saw were familiar highveld / miombo species, Brachystegia spiciformis, Julbernardia globiflora, Senna singueana, Lannea discolor, Cussonia arborea, Ficus burkei / thonningii, Peltophorum africanum, Dombeya rotundifolia, etc etc.  but there were also a lot of good specimens from the Eastern Districts and other areas: a couple of beautiful Newtonia buchananii from the Haroni-Rusitu area down below the Chimanimanis — those trees with highly glossy and finely bi-pinnate leaves; Polyscias fulva and Anthocleista grandiflora; Bauhinia galpinii; Markhamia obtusifolia with a couple of bold yellow flowers open at the top; a small Sterculia africana with huge leaves & quite a big S. quinqueloba; fine examples of B. glaucescens/ tamarindoides, Ficus ingens, Khaya anthotheca, Rauvolfia caffra, Albizia amara & more.  Among the smaller jobs were Pavetta gardeniifolia, the firebush Hymenodictyon floribundum, Tabernaemontana elegans, Euclea divinorum & Vangueria randii, a new one to me.

All in all everyone enjoyed a most pleasant and informative walk which ended with a delicious tea with strawberry gateau and honey cake very kindly provided by the lady of the house. Thank you to the Butlers for this enjoyable visit.

Anyone have plans to visit Madagascar?  You’d better do it soon!

Eighty-three percent of Madagascar’s palm species, which are a vital source of both food and building materials to the local people, are threatened by extinction, according to the International Union for Conservation of Nature’s (IUCN) latest Red List of Threatened Species, published in October 2012.  Madagascar hosts 192 species of palms unique to the island that are used by communities to construct houses (providing thatching and timber), as well as for local medicines and everyday utensils.  In addition the palm hearts are a substantial source of nutrition, providing remote communities in marginal agricultural areas with a nutritious, free resource.   Palm hearts are low in fat, provide fibre, and are a source of protein, potassium, vitamin C, calcium, iron, magnesium, manganese and zinc.  Poverty rates in Madagascar have been on the rise since the civil unrest in 2009. More than three quarters of the country’s 20 million people now live on less than US$1 a day, up from 68% before the coup d’etat. In rural areas, poverty rates are estimated at more than 80%.

A negative feedback cycle now exists where humans are destroying the palms, which in turn destroys their sustainable livelihoods.  The local slash and burn agriculture has tipped the balance between land clearing and preservation of the palm habitat to an unsustainable level in many areas. One species of palm, Ravenea delicatula, is considered by IUCN to be critically endangered. It is known from just one unprotected site which is being threatened by clearance of the forest to cultivate hill rice, and by miners looking for minerals and gems such as rubies.

The majority of Madagascar’s palms grow in the island’s eastern rain forests, which have already been reduced to less than one quarter of their original size and which continue to disappear.  The depletion of Madagascar’s palms is likely to have a significant effect on the ecological network. Degradation of forests by logging and clearing for agriculture is a real problem for palms because they are vulnerable during establishment and most will germinate and mature only under a forest canopy.

The recently identified gigantic Tahina Palm, Tahina spectabilis, is only found in the Analalava District of north-western Madagascar.  Towering over 60 feet in height with fan leaves of more than 5m in diameter and a life-span of 50 years, this strange species has gained the name as the Suicide Palm. At the end of the plant’s lifecycle the stem tips develop a giant inflorescence and burst into branches of hundreds of tiny flowers. Each of these flowers is capable of being pollinated and developing into fruit, dripping with nectar that attracts swarms of insects and birds.  The effort of producing such a colorful display and the production of so much fruit is so taxing that the nutritional reserves of the palm run out upon fruiting and the entire tree then collapses and dies.

This species has joined the threatened species list for the first time, with only 30 known mature palms growing in the wild. Large enough to be visible on Google Earth and on satellite imagery, Tahina spectabilis (commonly known as dimaka) remained undetected by science until 2007. Its extraordinary appearance and genetic evidence indicate that this palm belongs in a genus of its own within a group of palms originally thought to be restricted to Asia. Efforts are now underway to conserve this species through the distribution of seed and cultivation in botanic gardens. 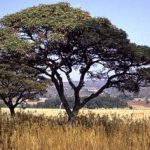 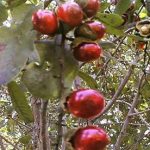