August 25th & 26th:   No outing.  The Tree Society will have a stand at the Sports Shooting Federation Outdoor Fair at the Sports Shooting Complex in Arcturus Road. Volunteers are still needed, please contact us by email or phone if you would like to volunteer (Editor back on 9th August; Chairman will be away in August).

The second day saw the group, after a hearty breakfast at Mpingue Lodge, start down the footpath to the sawmill, a distance of about 1km.  They were botanising along the way and as usual this took some time, as many of the trees were new to most of the group.

Ant White met us at the sawmill and led the group around all the different sections.  We had a very interesting morning learning about all the activities that are involved in the production of fine timber for furniture making.

All the land allocated for logging concessions in the Cheringoma District of Sofala Province were set up by the UN as part of the 2001 Gerffa Imitative, with the idea that Northern Sofala would form a conservation area that would provide an experimental platform for long-term sustainable commercial projects in  agriculture, forestry, hunting etc.. One of the principle criteria for the logging concessions was that a sawmill had to be established on site.  Catapú is however one of the only concessions that has complied with this regulation.

The requirement to locate a sawmill in the field was made to firstly stimulate local employment, to offer training to rural people and uplift the lives of the communities in these impoverished areas. Secondly, as transport is a very high cost component, it was to encourage foresters to establish sawmills in the field to not only lower the transport costs (not having to transport heavy logs huge distances to the city based mills), but also to encourage the maximised use of branch-wood and lesser value material. The use and conversion of branch-wood into a commercial product in the field has proven not only to be viable but also has had a positive impact on the sustainable use of raw forest materials. As history has proven, a semi industrial facility in the rural areas has a positive knock-on effect within the communities, with cheap (in many cases free) timber stimulating micro-industries to flourish.

In the sawmill the wood is converted from roundwood into flat planks using old Portuguese-manufactured Pinheiro saws, which are labor-intensive but tough and reliable units. These are ideal for far-flung African rural conditions. The blades are sharpened every 40 minutes when milling Panga Panga (Milletia stuhlmanii) (which contains silicone) and every 1.5 hours for Chamfuta (Afzelia quanzensis); The life of a blade is between  6 to 8  months.

Milling would normally be done on a “green log” (newly felled) however the versatility of the saws facilitates the sawing of dry material. Logs felled and abandoned in the forest from the Colonial days of the late 1960s still saw beautifully.   The old method of air drying timber has been replaced at Catapú by using modern kilns where sawn boards are stacked meticulously on trolleys, facilitating a roll-in-roll-out system of packing and unpacking the kilns. Every month 50m3 of wood (a consignment of 5 trolleys) is dried, 25m3 being dried in each of two kilns 24 hours a day for 21 days. Sawmill off-cuts and non-commercial branch wood is used to fire the heat exchanger (kettle). For each drying period a turnover of about 8 to 10% of boards do not meet the stringent moisture requirement of under 10 % humidity, and are recycled.  All first-grade saw material is used to make TCT Dalmann’s signature furniture.  (see www.tctdalmann.com).

A secondary industry has been evolved at Catapú to maximise the use of brown and white and non furniture-grade wood from the sawing operations.  Recovery wood is used to make beehives, low-cost housing panels, low-cost furniture and protection gates for the replantation areas, among others. Second grade brown and white material, not suitable for furniture production, is CCA treated (copper, chromate, arsenic, a treatment approved by WHO for human habitation).  Sawdust is used for mulching when planting trees, as well as compost making.

The official size limit for harvestable logs is a DBH (diameter at chest height) of 400mm for Panga Panga and 500mm for Chamfuta, as examples. Catapú has increased the limit of  DBHs on all species by 50mm to improve sustainability.  The recovery rate from round logs is surprisingly low: Panga Panga  has a furniture grade recovery rate of between 26 and 28% and for export quality parquet flooring between 22 to 24%. This low recovery is attributed to the fact that each Panga Panga log may have significant heart cracks. The low recovery rate is however mitigated by good downstream use of the 2 and 3rd grade off-cuts. Recovery of first-grade furniture material from species other than Panga Panga is significantly higher, with recoveries of 40%  for Chamfuta and Mutondo (Cordyla africana).  Catapú does not make veneer because the equipment is too expensive.

A secondary industry using timber lathes has been developed at Catapú, where community members are trained to make turned items from the abandoned branch-wood on the concession.  Maximum use of branch-wood also reduces the fire risk on the property. The men are first trained in all aspects of the trade, including material collection, manufacturing of traditional lathes and tool making. This is done to give them a skill which will allow them to return to their communities and use the high volumes of woody material felled on community lands, the residual of slash and burn agricultural practices. The intricacies of turning fine bowls, lamp stands and candlesticks (amongst other items) are taught, which will empower participants to copy these designs at home.  Trained turners who open their own turning workshops have a ready market at Catapú to sell their “green” goods. The unfinished items are bought, dried and finished in the Catapú worskhops.  African blackwood (Dalbergia melanoxylon), a common victim of wild fires, is used only for making musical instruments.

Part of the regeneration process at Catapú is the replanting of hardwood species, together with a programme of progressive coppice management on the concession. Successful reforestation of hardwood species is critically reliant on the collection, storage and treatment of seeds. The seed store is thus a key feature.

Each seed has its own germination secret which has had to be learnt. Chamfuta and Panga Panga seeds are scored and soaked for 12 hours to enhance germination. Fresh Mutondo fruit is harvested, the seed removed and “roughed up” and immediately planted to achieve best germination results.  The seed is planted out in long plastic seeding bags in the nursery under a three-day watering regime.   Again the seedlings of each plant species have their own idiosyncrasies that have to be learnt and managed.  For example Cordyla africana (wild mango, or Mutondo in Sena) needs direct seeding, not potting, so the ground has to be first excavated, followed by in-field planting, which has no apparent negative effects. This opens up new possibilities for community-based reforestation, where natural mass germination under a mother tree could give a viable supply of seedlings for reforestation efforts.  Seedbed establishment is started in September where staged germination takes place in controlled conditions through December. The saplings are planted out between January and April, during the annual rains.

Annually a reserve of 2,000 saplings is retained in the nursery, which are planted out in the following September.  The plants are water-assisted and mulched with sawdust to help retain the moisture. This allows the seedling to establish a good root system so that it is well prepared to take off with the December rains.

To date Catapú has in excess of 120,000 trees planted and surviving, plus 12,000 well-established and protected trees as part of the community development project. A minimum of 12,000 saplings are planted annually on the concession, with a further 150,000 seeds randomly distributed to community members. Coppice management on the concession has to date been an outstanding success, with about 40,000 living coppice units thriving and waiting in the wings to take their part in the sustainable timber production process at Catapú. 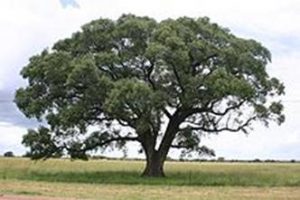 The Anacardiaceae family in the Zimbabwe wild is represented by Lannea discolor; Lannea edulis; Lannea schweinfurthii; Ozoroa paniculosa; Ozoroa reticulata; Searsia lancea; S. leptodyctia; S. longipes; S. yroides; S. tenuinervis (all the former Rhus family having been renamed Searsia) and Sclerocarya birrea. On the exotic side of the Anacardiaceae you will find the mango as well as the cashew and the pistachio (source Wikipedia).

The marula, Sclerocarya birrea, from the greek “skleros”, hard, and “karyon”, relating  to the stone inside the fleshy fruit, is a medium-sized  dioecious tree (the male and female flowers are on different trees) that is indigenous to the miombo woodlands of Southern Africa, the Sudano-Sahelian range of West Africa, and to Madagascar. 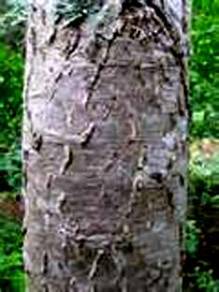 The tree is a single stemmed tree with a wide spreading crown. It is characterised by a grey mottled bark.  The leaves are imparipinnate with three to seven pairs of leaflets plus the terminal one.  The leaflets are green on the upper surface, paler bluish-green on the underside and the leaf tip is abruptly attenuate.

The leaflets are slightly asymmetric, mature leaves have an entire margin but young leaves are serrated. The tree grows up to 18m tall mostly in lower altitudes and open woodlands.

When ripe, the fruits have a light yellow skin, with white flesh, rich in Vitamin C – about 8 times the amount found in an orange – are succulent, tart with a strong and distinctive flavour.  Inside is a walnut-sized, thick-walled stone. These stones, when dry, expose the seeds by shedding 2 (sometimes 3) small circular plugs at one end.

Medicinal and other uses.

A hot infusion of the bark is drunk as a body strengthener and as a tonic for weakness/tiredness; the tea made from the bark can also cure vulvodynia; a root infusion is swallowed to arouse or prevent possession from spirits by the Ndebele; unspecified parts are used to facilitate divination by the Shangaan; unspecified parts are used for magical purposes; purification rites are performed by washing/bathing with the bark; and an extract of the fruit sap is drunk in Swaziland as an intoxicant. 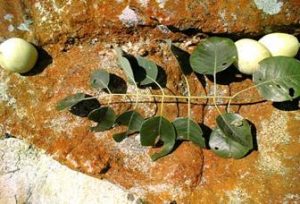 The seeds have a delicate nutty flavour and are much sought after by humans, as well as small rodents who know to gnaw exactly where the plugs are located. There used to be a mission near Masvingo that extracted the nuts with an hydraulic press, a delicious nut but as hard to crack as the nuts of Schinziophyton rautanenii.  The seed kernels are high in protein and fat and constitute an important emergency food. Marula oil made from the seed kernel is a delicious additive to meals. The oil contains antioxidants and oleic acid (source: Wikipedia).

The fruit is considered by some to be the most important of all indigenous southern African fruit. This delicious fruit is eaten fresh, used to prepare juice or jelly, or is fermented to produce marula beer or wine and it makes one of the best liqueurs. On the other hand the stories of drunken elephants and other animals need to be considered more soberly. I have made hundreds of litres of marula wine in my life and the specific gravity of the fruit, even rotting, is too low for serious intoxication – the number of fruits needed to be ingested would be enormous. In wine making, 11% alcohol is required for preservation and 10% is supplied by adding sugar to the must. 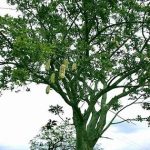 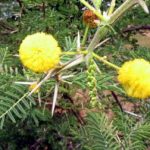