Dave Hasluck has kindly agreed to host us once more.  He will organise some braai fires and drinks for 1pm, so please bring your favourite meat, a chair and whatever else you need. Will be fun. Directions to follow by email.

Saturday July 28th: There is no Saturday outing this month because Mark Hyde will be away in the UK.

Call for Volunteers:  On August 25th & 26th the Tree Society will have a stand at the Sports Shooting Federation Outdoor Fair at the Sports Shooting Complex in Arcturus Road. The Fair has been held for the last two years, it is extensively advertised with many interesting stands, and this year it is expected that 1000 people will attend over the two days. This is a good opportunity for the Society to promote itself and attract new members.  We need at least 8 volunteers to look after the stand (2 each in the morning and afternoon on both days), to give information about the Tree Society and hopefully increase our membership.  Please contact us by email or phone if you would like to volunteer (Editor will be away in July and Chairman away in August).

After an initial briefing by Ant White on the history of Catapú and the operations of the company TCT Dalmann, we set off in a small convoy over the EN1 to look at the GAIT project (“Grow an Indigenous Tree”). Under this scheme, people pay a small fee and purchase an indigenous tree, which is numbered. The tree is usually intended to commemorate something personal – e.g. the death of a family member.

Later, four trees were planted on behalf of the Tree Society, a Cordyla africana, a Baobab, an Erythrina livingstoniana and an Afzelia quanzensis.

Shortly after, led by Meg, we were able to start looking at the fascinating flora of Catapú. Too many species were seen to discuss them all here and I would like to comment on a few of the commoner and most noteworthy species.

Panga-panga is a much sought-after tree for commercial reasons; I have hardly ever seen it before, but it is certainly common at Catapú. We found a tree with large brown-hairy pods and we were able to examine the pinnate leaves with the opposite leaflets and small ‘stiples’ at the base of each leaflet.

Meg next showed us Drypetes reticulata. Another new species to me, this used to be in the Euphorbiaceae family but is now in a small offshoot family called Putranjivaceae. This genus has alternate simple leaves, no milk and spherical or slightly 2-lobed fruits. This particular species has well-marked (reticulate) net veining on the leaves.

Another very common species is Acacia adenocalyx, the Sena name for which is Linghato. This is a scrambling species of acacia with scattered thorns; not much fun to walk though and indeed forming impenetrable thickets. Quite common in Mozambique, it is a rarity in Zimbabwe and I had never seen it before.

Another species seen everywhere is Markhamia obtusifolia. Leaves are imparipinnate and opposite; the flowers are yellow and showy and it has long pendent fruit. It seems to tolerate a great deal of disturbance.

A lower-growing woody species, more of a shrub, and tending to form thickets, was Alchornea laxiflora (the Lowveld bead-string). Despite searching we never saw flowers or fruits, but it was always easily recognisable by the two small gland-like pointed structures at the base of the leaf. Leaves are simple and alternate and this genus has remained in the Euphorbiaceae.

Also frequently seen was Rourea orientalis (sometimes better known under the old name of Byrsocarpus orientalis). This is a shrub or small tree with pinnate leaves; flowers and fruit are highly distinctive but we didn’t see either. It belongs to a rather obscure family, the Connaraceae.

On the afternoon walk we visited a tall slender baobab bearing a fine colony of an epiphytic fern. Petra Ballings has named the fern as Platycerium alcicorne, a very rare species in Zimbabwe, indeed possibly extinct here, but still occurring in Mozambique. Ferns and orchids are scarce at Catapú, but we did occasionally see epiphytic orchids on the trees.

Nearby was a very fine specimen of Bombax rhodognaphalon, a tree related to the baobab and from the same family, Bombacaceae.

A very interesting first day starting to get to grips with this fascinating flora. 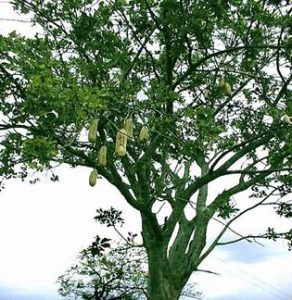 The Bignoniacea family in the Zimbabwe wild is represented by Stereospermum kunthianum (the pink jacaranda); Kigelia africana (the sausage tree) and the  Markhamia zanzibarica (the bell bean). The family is nevertheless well known by all of you because of the many exotics planted around towns and farms in Zimbabwe, the most conspicuous ones being Jacaranda mimosifolia, Spathodia campanulata (the African Tulip Tree) and Tecomaria capensis  (the Cape Honeysuckle), to name just a few.

Kigelia africana (the “sausage tree”) is widespread across Africa and is found in wet savanna and riverine areas.  The species is found across the whole of Zimbabwe but favours the warmer areas. The bark is smooth and grey with a tendency to flake in round patches.

The leaves are somewhat rough; the margin is often smooth but can also be toothed. Leaves are imparipinnate with up to four pairs of leaflets plus the terminal one. The final one is always symmetric but the side ones can be asymmetric. 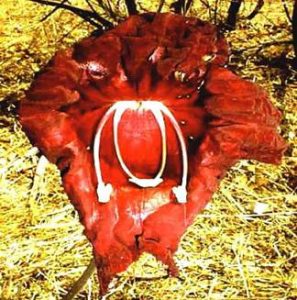 The flowers are very striking and beautiful in large sprays and are said to be mainly pollinated by bats.  They are dark maroon in colour with heavy yellow veining on the outside and have an unpleasant smell. Flowers are asymmetric and can measure up to 15 cm across. They are borne on a stalk anything from one to 11cm long, curving up at the tip, in drooping sprays up to 90 cm long, consisting of up to 50 buds which open at night and fall in succession the next day, usually two at a time. 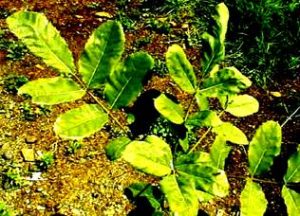 The fruit is shaped like a large polony and is eaten by baboons, black rhinos and porcupine.  The unripe fruit is said to be poisonous to humans but the seeds are eaten by people in times of famine.

An interesting thing I have witnessed in Matabeleland is teenage girls and boys (separately) dancing around the tree  and singing “ Umvebe, umvebe, give me large (amabele/ ubolo) like your fruits”.

The medicinal properties listed on Zimbabwe’s own PhytotradeAfrica website (www.phytotradeafrica.com) are multifarious:

From Senegal down to South Africa the Kigelia fruit has a long history of both consumption and topical application.   It is valued as an aphrodisiac, a disinfectant and a cure for dermal complaints.  Women rub an ointment, made from Kigelia fruit pulp, onto their breasts as a skin tightening, firming and enlarging treatment.  This treatment is also used on babies in the belief that they will grow to be fatter.  Women use the ointment to ensure clear, blemish free skin and the whole fruit is used in Tonga as a loofah for scrubbing skin smooth.  In addition the fruit is used effectively in dressing sores and wounds, both in humans as well as animals, and for a wide variety of skin applications, ranging from eczema, ulcers, acne, skin cancer and fungal infections.

Scientific literature confirms the validity of many of these traditional uses due to the presence of numerous secondary metabolites.  These compounds include iridoids, flavonoids, fatty acids, sterols (sitosterol and stigmasterol), glycosides, caffeic acid, coumarins (including kigelin) and napthoquinones (including kigelinone).

The fatty acids include palmitic, stearic, oleic, linoleic and  linoleic acids. The pulp also contains the long-chain alcohols tetracosanol, hexaconsanol, octaconsanol and triacontanol. Antibacterial activity has been shown against both gram-negative and gram-positive bacteria.

Kigelia extract was shown to contract the area of wounds less than 300 mm2. Strong anti-inflammatory activity has been indicated, without showing the common side effects normally associated with this activity. In addition norviurtinal has shown cytotoxic activity through the reduction of both gross tumours and the incidence of tumour burden (source: www .phytotradeafrica.com). Kigelia  pulp is also now being increasingly used in cosmetic preparation.

To conclude, just a few words about wood characteristics.  The wood texture is coarse and uneven, the durability is below average and resistance to borers poor. It can nevertheless be worked fairly easily and takes a nice polish. Because of this it has been used to make canoes on the Zambezi. Fortunately it has been spared the fate of the Mukwa (Pterocarpus angolensis) and the local “Teak” (Baikiaea plurijuga), possibly because it tends to proliferate in inaccessible areas. 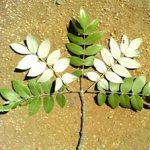 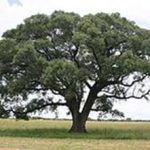