April 7-14th:  Trip to Catapu in Mozambique.  A full week  organised by  Meg Coates-Palgrave for those who have already booked.

Membership for 2012 is due on April 1st. If you would like to vote at the AGM please pay your $5 subscription to Bill Clarke or Mark Hyde either before or at the meeting. Alternatively you can pay it into the Tree Society’s CABS account, quoting the members name as the reference. Account name: W.R.Clarke T/A Tree Society; Acc. No.: 9015224328.

Notice of the Annual General Meeting of the Tree Society

Notice is hereby given that the 62nd Annual General Meeting of the Tree Society of Zimbabwe will be held at the Education Centre, Mukuvisi Woodlands on Sunday 20th May 2012 at 9.30 am.

Any proposals/resolutions and nominations for office bearers (and any volunteers to be on the Committee) should be forwarded to the  Acting Secretary Mark Hyde at mahyde@pentact.co.zw) by Sunday 6th May if possible, although proposals and nominations will be accepted from the floor.

Members will be please to hear that the Beit Trust has generously donated $700 for the next two fumigations of the National Herbarium.

BOOKS Mark Hyde has a number of Lyn Mullin’s excellent book “A New Zimbabwean Botanical Checklist” for sale ($5). Please contact him if you would like to buy one. 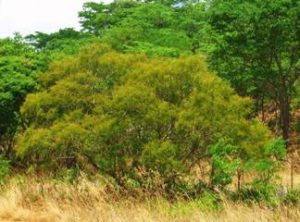 This is one of our most beautiful indigenous trees, why it does not line streets in our cities is a mystery. Over the year it goes through a symphony of delicate colours, from the delicate green of the fern-like new shoots, the many shades of brown of the branchlets, flower stems and pods and the bright yellows of the flowers.

Depending on the geographical area it is a mostly semi-deciduous, rarely deciduous tree of about 15m with a spreading, untidy canopy tending to branch quite low. Peltophorum grows best in well drained soil.

In older trees the bark is grooved and grey-brown; the bark of young branches is smooth and greyish-brown. 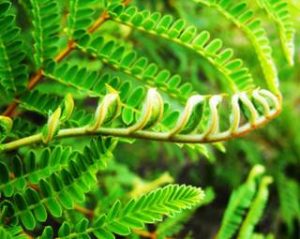 The leaves are silver-grey and covered with fine hair; mature leaves are yellowish at tip of branches. The leaves are twice compound with a pair of leaflets at the tip; alternate; up to nine pairs of pinnae each with 10-20 pairs of leaflets; leaf, stalk and rachis covered with reddish brown hairs. Flowers form upright, showy sprays (150mm long) of bright yellow flowers with crinkled petals on the ends of branches; the stalk covered with reddish brown hairs. These are followed by clusters of thin, flat dark brown/black pods of about 10cm, tapering to both ends.

To propagate Peltophorum africanum place fresh seed in hot water and leave overnight. Sow in a 5:1 mix of river sand and compost. The trees are fast growing and drought resistant. 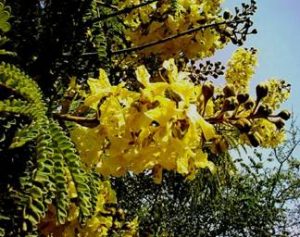 This tree has many uses. Young leaves and pods are eaten by livestock. Flowers provide a high yield of nectar and pollen for bee-keeping. The timber can be used for furniture and the wood is good for fuel. It makes a good shade tree for both livestock and humans. There are also various medicinal uses recorded. Roots are used to heal wounds, toothache and throat sores; root, leaves and bark used to clear intestinal parasites and relieve stomach problems; bark relieves colic; stem and root used for diarrhoea and dysentery.

I think we had a lovely day that Sunday.  We had a good turnout of 13 people and spent our time down by the dam near the former Recreation Centre (now occupied) where there are several termite mounds. Thank you to Isla for being recorder-of-species and Bilal for being keeper-of–specimens and as a result of their efforts, I was able to see what had been previously recorded and consult with Mark on my lapses of memory and/or lack of knowledge. On that day we found a total of 52 of the plants listed on Mark’s list, plus the ones I took home to identify.

Let me start with a tree puzzlement. Rob drew our attention to the waterberries, Syzygium. There was one with a lobed base and no petiole, which was definitely S. cordatum, waterberry. And then we found two examples of which were definitely not S. cordatum, but did not look quite right for the woodland waterberry, S. guineense. There is a species which is considered a cross between S. cordatum and S. guineense, which has actually been described as a species and given the name S. intermedium and hybrid waterberry as a common name. I think it is a valid species and if it is, Mark and I agree that this is what we found. James Byng at Kew is working on this genus and I hope to show him our specimen.

I knew the very first woody perennial we saw, more or less while we were waiting to see if anyone else was coming, but the name would not jump into my head. As I sat down at my computer the next morning it did just come to mind – Triumfetta – and after consulting the Flora of Zimbabwe website I was able to work out the species name as well, Triumfetta dekindtiana. This is a new record for Mark’s list for Kutsaga.

The other one whose name I should have known but was able to work out after I got home was the little sensitive plant, Biophytum.  It used to be B. petersianum but has been reclassified as B. umbraculum. No wonder we couldn’t find a ‘petersianum’ on the list!

There was a little legume which has proved to be Crotalaria alexandrii, another first for the list. The legume with very long leaflets we found near the carrot-trees was a Tephrosia, but this is a genus with some 70 species that we haven’t been able to come to terms with yet, so it remains Tephrosia sp.

The funny little plant with green leafless stems that looked succulent but did not have a milky sap and almost looked like a parasite a bit like a miniature Viscum, could well have been a parasite, possibly a species of Thesium. That genus belongs to the family Santalaceae and is usually a herbaceous root-parasite. We would need to take it into the Herbarium to confirm the genus and identify the species.

Lastly the aromatic herb we saw just before we all decided it was lunch-time was a Plectranthus. This is a genus where the herbs only do one thing at a time. They tend to come into leaf, manufacture lots of food, drop the leaves and then produce flowers.  Until this one produces flowers we won’t be able to come up with a name for the species. 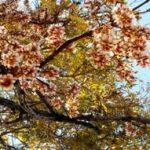 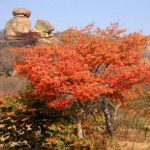