Saturday  March 17th:  Briefing meeting for all those who are visiting Catapú in Mozambique in April. Details to follow.

Sunday March 18th.  Visit to Kutsaga. We  expect to find interesting trees with some well protected habitat.   Meet as usual at 0930. Bring your lunch and a chair for an all-day outing

This is a small park adjoining Cleveland Dam.   Time   1430. Be prepared for an entrance fee at the gate.

A reminder that there are still places for the trip to Catapú, the forestry concession of TCT Dalman in Sofala Province, Mozambique from April 7-13, 2012, including the Easter weekend.  Please contact Meg Coates Palgrave: megcp@zol.co.zw Tel: 0772 234433.

Membership for 2012 is due on April 1st. If you would like to vote at the AGM please pay your $5 to Bill Clarke or Mark Hyde either before or at the meeting.

We have had no response to the first appeal, so here it is again.  In September 2009, members may recall that we launched an appeal for funds to enable Zimbabwe’s National Herbarium to be fumigated.

The response was highly gratifying and the funds raised enabled us to carry out 4 fumigations at approximately 6 monthly intervals. The cost of a single fumigation is US$ 350.

In the intervening period, the financial position of the Herbarium has remained weak and it appears that further support for continuing fumigation will be necessary. I am therefore re-opening the request for funds and would ask every member to consider making a donation towards this important appeal, the purpose of which is to prevent the plant collections deteriorating through insect damage.

This appeal is not in any way limited to Tree Society members and I would ask you to spread the word to your friends and any potential donors.

Donations can be made in cash to the Treasurer, Bill Clarke, to Terry Fallon, myself or any committee member.

A QUICK LOOK AT AUSTRALIA

My sister Audrey & her Scottish husband George (who built the Jack Quentin Bridge – the longest in Zimbabwe – over the Save near Chisumbanje, but in 1981 returned to Australia) have lived for many years at their delightful home “Battlers’ Rest” in the charming, friendly small town of Berry, near Nowra on the East coast of New South Wales.

I first visited Berry for a few days in 1991 when I strolled around the streets and noted that one of them was essentially an avenue of lovely Erythrina in full bloom, of a species then unknown to me but very similar to E. lysistemon.  Last year from the end of October to mid-December I was able to get to know ‘Oz’ very much better by spending three enjoyable weeks in Berry with sister & bro-in-law and my wonderful nephew & niece Billy & Eveleigh.  I was able to enjoy swimming with them in the mighty ocean off Seven-mile Beach, just 10 minutes from the house, or go walking or climbing in the adjacent hills from the tops of which one could enjoy beautiful views of the evergreen countryside which was a bit like England on a grand scale, due I suppose to the regular moisture supply coming off the Pacific. 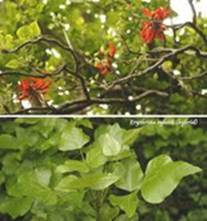 One of the first things I did in Berry was to go looking for my mystery ‘Coral’ trees, but sadly they had all disappeared.  Apparently they had a habit of falling over, so the safety-conscious Aussie council had cut them all down.  But on one of our lovely scenic drives I spotted a few wild ones near the road, one of which still had a few flowers (see pic below).  I was then able to identify it as E. sykesii which, being a hybrid, never has fruit of course.

With over 600 species of Eucalyptus (MYRTACEAE) on the continent, the forests tend to be somewhat boring to one used to our multiplicity of species, though it must be said that some of them are indeed magnificent, handsome trees.  And interspersed with them are a good variety of attractive Banksia & Grevillea (both PROTEACEAE) as well as many different Bottlebrushes (Callistemon, MYRTACEAE) and lots of smaller stuff with beautiful flowers, plus huge Cycads.   Other indigenous types, with which we are familiar here as exotics, such as the Australian Flame, Lace Bark & Poplar-leafed Brachylaena, can be found all over the place.  Then, just like here, there are numerous introduced species: Jacaranda, Syringa (Melia), Cape Chestnut, Pines & Firs etc, to name but a few.  All in all I had a most interesting holiday, even though I didn’t come across any proper Tree Life types! 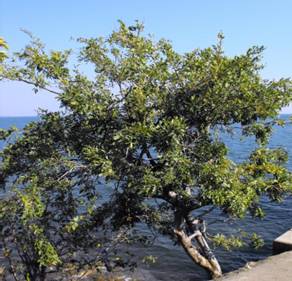 I did say Philenoptera bussei but you will know the tree better under its previous name, Lonchocarpus bussei, probably renamed for the benefit of Australiapithecus bradymindus.  Those Seniors may even know it as Lonchocarpus menyharthii. The important thing is to remember that it is a member of the Leguminosae just as thousands of other pod bearing plants and trees, the sub-family Papilionoideae normally has pea-shaped flowers. 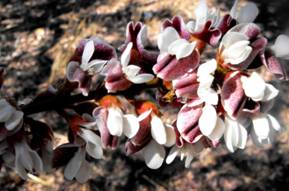 The tree usually grows to about 10 metres  but sometimes up to 15 metres under favourable conditions. In Zimbabwe it grows in warmer, lower altitude areas – I know it from the top of the Escarpment all the way to the Zambezi valley; I believe it also grows in the Lowveld.     It has a grey bark, cracking into square sections in mature trees.  The leaves are imparipinnate with 3 to 7 pairs of somewhat  narrow leaflets (definitely much narrower than Lonchocarpus capassa (the rain tree));     The flowers are pea-shaped, purplish to mauve.The fruit, as expected, is  a pod, 4-10 x 1-1,5 cm, pale straw-coloured to light brown, hanging down in loose clusters, indehiscent (the pods remain closed, they do not open to release their seeds). 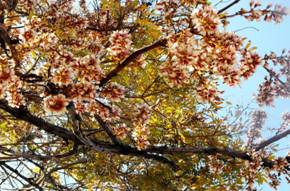 The tree does not appear to be browsed by wild animals and, even though it is reputed to be suited to a wide range of habitats North of the Zambezi, the only planted one that I know was planted at the Botanical Garden by Tom Müeller. Pity, as it would be a nice garden subject.

Jonathan Timberlake from Kew, who has kept up with events at the fated Melbourne Nomenclature session of the IBC in July 2011, tells me that Acacia has not yet been split into five separate genera (Vachellia, Senegalia etc.) as I had said, but it is inevitable that it will eventually happen.  Kew intends to still use the name Acacia for their African species but they are concerned that someone else outside Africa will officially rename one of the species and then even the new name will not be linked to an African taxonomist. 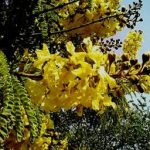