We are invited to visit by Penny Raynor.  Gosho Park is primarily used for conservation education, and thus is a very interesting venue.

We will meet there as usual at 0930. Bring all that is needed for a picnic lunch.

The second annual plant sale by the ACSSZ takes place this Sunday at the Botanic Gardens from 9 am to 2 pm. There will be plenty of plants of all types on offer so come along and bring friends. And come early as the best plants go quickly. Entry is, as usual, at the southern entrance along Fifth Street extension. Parking is plentiful.

In our report on the June visit to La Rochelle in last month’s Tree Life, we erroneously referred to Jannie Martin as Terry Martins.  Our apologies to Jannie and thanks to Nina Bauer for pointing out the error.

African Trees May Be Tied to Lemurs’ Fate

On the island nation of Madagascar, only primates called lemurs are big enough to move the seeds of many trees around and thus improve the chances of the trees’ survival.

“Lemurs are very important seed dispersers in Malagasy rainforests,” said Chris Birkinshaw, a biologist with the Missouri Botanical Garden in St. Louis who is an expert on lemur seed dispersal.

There are 38 known species of lemurs, which are found on Madagascar only. They range in size from the 6cm pygmy mouse lemur (the world’s smallest primate) to the indri, which is the size of a small child. 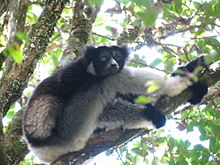 Birkinshaw recently conducted a study in the Lokobe reserve in the northern part of the country. He found that 54 percent of the tree species and 67 percent of individual trees there had grown from seeds dispersed only by the black lemur, a medium-size primate. Lemurs spread the seeds by eating the trees’ fruits and expelling the seeds as they defecate.

Lemur populations are dwindling on the 580,000-square-km island. Conservationists fear that the trees that rely on lemurs will disappear along with the primates.

“The trees’ fruits are some big foods, and there’s nobody around anymore except lemurs and maybe, possibly, introduce pigs who can eat these foods and disperse the seeds,” said Joerg Ganzhorn, a primatologist at the University of Hamburg in Germany.  Ganzhorn’s research in the dry forests of western Madagascar shows that lemurs are important seed dispersers for about 10 percent of the trees there.

The clearing of forests to make way for seasonal crops and provide grazing for cattle are the major threats to Madagascar’s forests. But areas that look healthy but contain small lemur populations presumably contain trees without adequate seed dispersal, Birkinshaw said.

“In such forests, wind-dispersed trees or trees dispersed by small birds would have a competitive advantage over lemur-dispersed species, leading perhaps to changes in their relative abundances,” he said. “Reintroduction of seed-dispersing lemurs should be considered in such circumstances.”

Lemurs, according to Birkinshaw, are such good seed dispersers because they can swallow big seeds: the cat-size black lemur, for example, can swallow seeds up to 1.6 inches (4 centimeters) long and as many as ten such seeds in one sitting.

The lemurs swallow seeds of such size because they are covered in a fleshy reward that the primates are unable to separate from the seed. To get it, they have to swallow.

“The seeds are normally shaped so that they are easy to swallow—similar to the shape of capsules or tablets given by the doctor—and are also slippery, so that once they are taken into the mouth, they are swallowed almost without noticing,” Birkinshaw said.

As the lemurs digest the fleshy fruit, the seed is passed through their system, normally away from the parent tree. Once on the ground, the seeds take root.

According to Birkinshaw, some fruits in Madagascar are especially adapted to lemurs. For example, he said their fruits tend to be dull in color, owing to lemurs’ poor color vision, but have a smell the primates find attractive.

Birkinshaw said that while he is unable to distinguish the smell of the fruits, lemurs have a much greater sense of smell and “clearly can” smell a particularly desirable fruit from a great distance.

“Sometimes groups move a long way, say 300 meters [1,000 feet] out of their normal territory to exploit a particularly desirable fruit source that they had not previously been near,” he said. “I can only think that they knew it was fruiting because of the scent of the ripe fruits.”

The other alternative, he said, is that the lemurs are able to predict when particular fruit sources are available in different parts of the forest based on previous experience. “That would be even more remarkable,” he said.

Ganzhorn, the German primatologist, said he has a difficult time finding convincing evidence that fruits are adapted to lemurs, which he says will eat anything that is ripe.

“There are definitely fruits that are only eaten by lemurs and that situation is in all forests of Madagascar,” he said. “But except for size, there is no convincing correlation between characteristics.”

Nevertheless, lemurs are the only animals left on the island nation large enough to disperse many of these seeds. And they have become a long-term conservation priority, Ganzhorn said.

“If these animals are gone, then the forest has a harder time regenerating. For long-term conservation, it is important to have lemurs,” he said. “The problem is that in the short interval and time scale, these forests will be gone, because people simply cut them.” 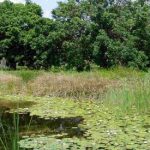 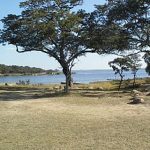