It has been many years since the Tree Society visited Gosho, and we hope to see the msasas in new leaf plus some of the more unusual tree species that are to be found in the Marondera area.

Please bring a chair, water and a hat and a packed lunch. We will meet at the park at the usual time of 9:30 am.
Directions: Take the Mutare road; pass through Marondera and at approximately the 83.5km peg, turn left to Springvale, which is the prep school for Peterhouse. Book in at the guard’s office at the school gate, and you will then be let into the Park. Once inside, drive to the parking area where we will meet.
Note: There is an entrance fee of US$2 per person, or US$1 for pensioners.

Saturday, August 28th: 167 Enterprise Road, Harare
By kind permission of the owners, we are visiting this café to have a look at the trees in their garden.
There is no entrance charge, but we have been asked not to bring any food or drinks.

Visit to Aberfoyle Lodge
As members will already know, the Tree Society has arranged a three-night outing to Aberfoyle Lodge from Friday 17th to Monday 20th September.
It has been some time (2006) since the last out-of-town Tree Society trip, and I am most grateful to Bill Clarke for making the necessary arrangements.
The Aberfoyle area is very special for trees and plants, but those attending will not be obliged, unless they wish to, to spend all their time botanising. However, Meg Coates Palgrave and I probably will do so!
I am sure that many members will recall past memorable visits to interesting places, so do come and join us.
Mark Hyde

There will be illustrated talks by Zimbabwean experts on birds, moths, fungi, snakes, plants, and much more.
Members of the Tree Society are cordially invited to attend what promises to be an interesting day for all interested in Zimbabwe’s natural history. Please diarize the date well in advance and don’t miss what promises to be another enjoyable and informative Symposium.

Registration is $10 per person and this amount includes mid-morning tea, coffee and food. Bring your own drinks and food for a picnic in the grounds at lunch time, and also a folding chair for that purpose.
Mike Kimberley
Convener

Cypress, Cupressus lusitanica, is an exotic tree species widely found in sub-Saharan African countries. This soft-wood plant is grown mainly as a plantation forestry species, and as homestead trees and as hedges. The trees became seriously affected by the sap-sucking insect pest known as Cypress aphid, Cinara cupressivora. In Africa, the insect was first accidentally introduced into Malawi in 1986 and spread towards Ethiopia in 2004 after devastating the Cypress plantations of Malawi, South Africa, Tanzania, Burundi, Rwanda, Democratic Republic of Congo, Zimbabwe, and Kenya, as well as North African countries such as Morocco and Libya.
International Efforts to Combat Cinara cupressivora

CABI and collaborating scientists conducted extensive surveys for aphids and their natural enemies in northern and central America, Europe, North Africa, the Middle East and Pakistan. The taxonomy of the cypress aphid and pine woolly aphid was clarified and, as a result, bio-control agents against the pests were identified. A parasite of the cypress aphid, a wasp—Pauesia juniperorum—was screened and released in Kenya, Uganda and Malawi, and established in all three countries. In addition, rearing methods for appropriate natural enemies were developed and implemented in all five countries.

The first survey made in the northern and northwestern areas of Ethiopia revealed that this insect pest had spread to almost all of the cypress hedges, homestead trees and plantations to different degrees. Cypress plantations which required intervention with the biological control agent and those which needed regular monitoring were identified.

The Ethiopian Institute of Agricultural Research, Forestry Research Center (FRC) approached the African Forest Research Network located in Nairobi, Kenya with a request for research funding over three years. An international agreement was established among Ethiopia, Kenya and Malawi to conduct research on the evaluation of Pauesia juniperorum (Pj) in the Ethiopian context, to carry out host specificity tests against beneficial insects, implementing the release of the parasites and conducting impact assessments. Two researchers from Ethiopia were trained at the Kenyan Forestry Research Institute in 2006, and Pj adults were introduced from Kenya in 2006 and 2007.

The Pjs were reared first at the FRC in Addis Ababa and then at the Arsi Forest Enterprise (AFE). The multiplied parasites were then released in AFE Cypress plantations between January and February 2008, after several host specificity tests had been carried out for beneficial insects: honey bee adults, silkworm larvae, spider adults, lady bird beetle adults and larvae. The parasites performed beyond expectations in the release forest areas. Pj adults spread successfully and within three months established themselves in almost all of the cypress plantations of the AFE and surrounding cypress hedges and patches of trees. Based on these observations and promising results, release of the parasites was recommended for other states in northern Ethiopia.

A survey of the rest of the country was deemed necessary to identify the cypress plantations which needed critical intervention and regular monitoring. The objective of this mission was to monitor the cypress aphids’ damage in all of Ethiopia and to identify the most affected and economically important cypress plantations with a view to intervention using appropriate control measures.

The existing cypress hedges, trees and plantations will be wiped out unless serious interventions are made. It was then recommended that prompt intervention with Pj is essential in strategically selected large cypress plantations so these could serve as a multiplication center to benefit nearby hedges and trees.

Plans for Expansion of Parasitic Wasps Release in Other Regions

In addition to Cypress trees, cypress aphids also infest Juniper (Juniperus procera) trees in many parts of the country. It was thus decided to try to interest other partners into supporting treatment initiatives in other heavily infested Cypress plantations in the rest of the country. FAO managed to procure resources to address the problem in a famous forest—Suba Sebeta (formerly known as the Menagesha Suba State Forest)—located near Addis Ababa.

Suba Sebeta forest is located 55km from Addis Ababa. It was founded by Emperor Zera Yacob in the 15th Century as the first crown forest of Ethiopia. The forest used to be managed by the Federal Ministry of Agriculture and Rural Development but is now under the Forest Corporation of the Oromiya State. It is mostly used for recreation, conservation of biodiversity and harbors some of the last natural stands of indigenous species. There is also logging of exotic species such as Eucalyptus, Pine and Cypress. These species are also subject to infestations by different aphid species.

The forest used to cover 10 000ha but, due to human and agricultural pressure, it now occupies only a quarter of its former area. It is covered by giant indigenous tree species, such as Juniperus procera, Hagenia abyssinica, Prunus africana, Podocarpus falcatus, Wild African Olive, Olea africana, Erica arborea and a series of other high altitude shrub and tree species. It also hosts endemic and rare wildlife, such as Nyala, black panthers and other more common species such as baboons, colobus monkeys and warthogs.

While exotic Cypress and even indigenous Juniper trees have suffered important aphid infestations in Ethiopia, thanks to research and development, the country has benefited and will continue using the biological control agent based on the rearing and releasing of the Pauesia juniperorum wasp. 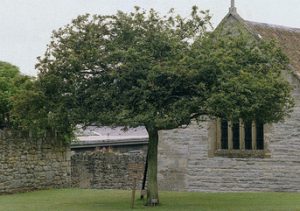 • The ‘Glastonbury Thorn’ is a type of Hawthorn found in England and in some parts of Palestine. The tree is said to have been brought by Joseph Arimathea on a visit to England. Wherever Joseph travelled spreading the word of God, he carried a staff which he had acquired in Palestine. Legend tells that he visited the Isle of Avalon (Somerset), which at one time was surrounded by water. Tired from traveling, he sought rest and sat down upon “Weary-all Hill”, now called “Worral Hill”. Joseph stuck the staff into the ground, and legend says that it took root and a tree grew. A church was erected on the spot, now the site of Glastonbury Abbey. The tree was seen as sacred and was reputed to blossom only on Christmas Day.

• The flowers were highly prized and at one time exported around the world. It is believed that the Hawthorn had two trunks, but one was cut down. The perpetrator was punished, according to legend, by having one of his eyes taken out by the thorns:
‘He was well serv’d for his blind Zeale, who going to cut doune an ancient white Hauthorne-tree, which, because she budded before others, might be an occasion of Superstition, had some of the prickles flew into his eye, and made him Monocular.’
James Howell, Dodona’s Grove 1644

• Cuttings are said to have been taken around Britain that still flower at Christmas. Although Hawthorn trees can still be found in the abbey, these are said to be cuttings of the tree as it is believed to have been cut down during the English Civil War (during the reign of King Charles II).

• The flowering of the Hawthorn tree is a sure sign that winter is over and spring is underway, hence the tree has been viewed as an indicator of changes in the seasons or a weather omen. It is known simply as “May” in some parts of England as this is the month that it flowers.

• The Hawthorn in ancient mythology was created from lightning.

• Germans traditionally used wood of the Hawthorn in funeral pyres as it was thought to assist the souls of the dead in ascension.

The African Baobab (Adansonia digitata) is the largest and most widespread species of Baobabs. It is a traditional food plant in Africa and has been called by various names, including: upside-down tree, botanical monster, tree of life and monkey bread tree. The tree is leafless for much of the year, giving it an unusual appearance—as if its roots are sticking up in the air. One legend has it that the devil pulled out the tree and planted it upside down. Another legend holds that the Baobab was extremely arrogant about its appearance—so much so that God punished it for its pride by also pulling it up and replanting it upside down. Baobabs are believed to be among the oldest living residents on Earth; through carbon-dating one of them was found to be 6,000 years old. 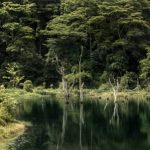 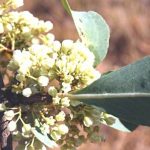