February 15: Mukuvisi Woodlands.  Our outing this month, on the 3rd Sunday, will be to the Mukuvisi Woodlands. Instead of visiting the Blatherwick Avenue side, this time we will be botanising in the main area near the offices. There are plenty of both native and planted trees for us to see.  Please bring some money – for either an entrance fee or a donation.
Directions: To get there from the centre of Harare, take Robert Mugabe Rd. At the crossroads with Glenara Ave, turn right, cross the railway line and turn left at the next set of traffic lights into Hillside Rd (it used to be called the Transtobac Rd). After about 200m, turn into the Mukuvisi Woodlands on the right.  IMPORTANT! Immediately on entering the Woodlands gate, turn LEFT towards the education centre and park in front of the centre. There is ample parking and we will have our lunch in that area.
We will meet at 9.30 am. Please bring a chair and packed lunch.

MATABELELAND CALENDAR
Please contact Jean Wiley or Gill Short for details of the next Matabeleland function.

SUBSCRIPTIONS
The subscription for the 12 months beginning 1 April 2009 will be US$5, which must be paid in cash.

The subscription will be the same whether or not a Tree Life is sent by email or whether a hard copy is produced. However, we intend to reduce the number of hard copies and no new applications for hard copies will be entertained.
The subscription may be paid in the following ways:
1. At any outing;
2. To the Treasurer, Terry Fallon, at 285 Samora Machel Avenue;
3. To me, Mark Hyde, at 29 Harry Pichanick Drive, Alexandra Park;
4. To any other Committee member.
Receipts can only be issued at the time of payment if payment is made directly to the Treasurer, who holds the receipt book, but receipts are created in all cases and if anyone wishes to have a copy of their receipt, please ask at time of payment or contact the Treasurer, Terry Fallon.

TREE LIFE
It has been suggested that Tree Life should be made freely available to anyone interested, whether they are members of the Tree Society or not. This would spread interest in the Society beyond the relatively small group of members.
This idea was taken seriously by the Committee and discussed at the last meeting. However, it was decided that too few benefits of membership would remain if that were done.
It was agreed, however, that anyone interested would receive notifications of all events, together with details of how to join.

FROM THE LOCAL PRESS
These two recent media items, somewhat edited, may be of interest to Tree Life readers.
–Ed.

Zimbabwe is losing nearly 400 000 hectares of tree cover annually because of an increased demand of firewood, the Minister of Environment and Tourism Mr. Francis Nhema, has said.

Mr. Nhema said there was need for every citizen to plant trees to avoid climate change since between 1990 and 2005 the country lost 21,1 percent forest cover.

“In the 2008 planting season, the target is to plant at least 7,5 million trees, an increase of 50 percent over the long term average number of trees planted. Last year, the nation planted three million trees,” he said.

He said December 6 marked the 29th National Tree Planting Day. Mr. Nhema said an average of five million trees have been planted every year, giving a total of 140 million trees, adding that 65 percent survived the ravages of weather.

The tree planted by President Mugabe – Mutsangu/ Umkhaya or Winter Thorn tree, which is also known by its botanical name Faidherbia albida – is one of the fastest growing indigenous trees. Mutsangu can grow up to 60m in height and two metres in diameter.

It is common along the Zambezi Valley and low-lying areas of Matabeleland North and South, Masvingo and Save Valley in Manicaland where rainfall ranges between 250mm and 600mm per year.

Vice Presidents Joseph Msika and Joice Mujuru as well as the Minister of State for National Security, Lands, Land Reform and Resettlement Didymus Mutasa also planted their own trees at the occasion.

VP Mujuru planted the Musasa tree which is known in IsiNdebele as Igonde and whose botanical name is Brachystegia spiciformis.

The Musasa tree, that reaches a height of between 10-15m, is mostly found at medium and high altitudes and is usually dominant or co-dominant in Miombo woodlands. It is commonly found in nearly all of the country’s provinces thanks to its tolerance to different soil types. 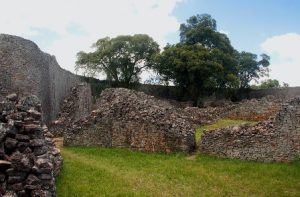 VP Msika planted Muchechete – Mimusups ziheri or Red Milkwood tree – some of which are found at Great Zimbabwe, where they sandwich the Conical Tower.

The tree, in some instances, grows into a shrub but can grow up to 15m and provides edible fruits to human beings, birds and animals. The fruits have a fairly high Vitamin C content.

Mr Mutasa concluded by planting the Mupambangoma or Mukweshangoma, which is known as Impaca or Wisteria tree.

The tree, known in botanical circles as Bolusanthus, is decorative and does not grow tall. Commonly found in woodland grasslands in the Southern African region, Mukweshangoma has been grown on the highways for its decorative qualities. Animals like monkeys, gemsbok, giraffe and grey duiker eat the its pods and leaves while its wood is popular with carpenters.
-The Herald 19 December 2008

Editor’s Note
Notwithstanding the images conveyed in the popular press of a nation busy planting trees, it was increasingly brought to my attention over the last four months of 2008 that considerable quantities of trees were being felled in the National Botanical Garden. People walking their dogs in the early evening, for example, reported seeing trucks laden with wood departing the entrance gate as the light faded. Others phoned to tell me of encountering fresh stumps on every walk and of seeing stacks of cut wood presumably awaiting collection.

I am happy to report that the cutting seems to have abated. The primary identified culprits, it seems, were the Presidential Guard. The management at the NBG welcome input from the public. And it was largely public feedback that allowed pressure to be brought on those responsible.

So, if you do see things in the NBG that should not be going on, do take the time and make the effort to contact the management. It is the only way we have to protect this magnificent heritage.
-Bill Kinsey 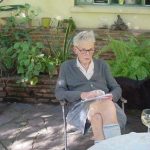 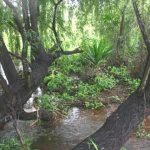