We shall be having only one outing this month, on the 3rd Sunday, November 16th. We will be visiting Greystone Park Nature Reserve. This is an interesting area with diverse habitats, including riverine vegetation, miombo woodland, as well as aquatic habitats.  We will meet there at 9.30 am. Please bring a chair and packed lunch.

All members of the Tree Society are invited to attend the 7th Natural History Symposium on Sunday, November 30th (8am to 4pm) at 51 Lawson Avenue, Milton Park, Harare (the premises of the Zimbabwe-German Society).  This event is organized by the Aloe, Cactus and Succulent Society of Zimbabwe.

The program is as follows:

Some of our Birds (Alex Masterson)

Registration will take place from 0800 to 0830, followed by the program.  Registration is US$5 (or the Z$ equivalent on 30/11/08) per person payable at the door.  Morning tea will be provided for a small charge, and those attending should bring their own picnic lunch, drinks and a folding chair.

The park lies 11.55km east of the Harare GPO near Cleveland Dam, just north of the Harare/Mutare main road.  Haka Game Park is a private park of an estimated 4000ha and is owned by the Harare City Council.  The park is under extreme pressure from game and wood poachers.  The surrounding areas are almost totally denuded of trees.  It will be a tragedy if the same fate befalls Haka. The area is flat and underlain by granite with shallow gray sandy soils.  The most striking features of the area are the extensive moist vleis.  Eleven people attended a very pleasant outing.  Thanks to Mark Hyde, our leader for the day.

The woodland visited was dominated by Syzygium guineense sub guineense and Parinari curatellifolia, both trees characteristic of high water table areas.  Typical miombo woodland trees such as Brachystegia spiciformis  and Albizia antunesiana were confined to the drier rocky areas.  On one of these rocky areas, there was a specimen of A antunesiana in full flower. Dombeya burgessiae, a tree previously recorded in the Cleveland Dam area, but rarely seen since, was surviving heavy burning in the river valley.  The multiple stems had been burnt and a healthy re-growth from ground level was occurring.  Ochna puberula is not often seen, but Ochna schweinfurthiana, with its typical horizontal cut-like marks on the bark, is frequently encountered on our outings.  What was unusual about O schweinfurthiana was that many were in full flower.  Flowering of O schweinfurthiana is an ephemeral event, sometimes beginning and being completed within the span of a morning.  Often the only sign of flowering is a carpet of yellow petals seen under the tree the next day.  A lone specimen of Vangueria infausta with only two leaves was identified by its characteristic shape.  Unusually, Rauvolfia caffra and Syzygium cordatum were seen at the moist edge of the woodland, far from their normal riverine habitat.

The vlei areas surrounding the woodland would normally be grass-covered, but, as is usual at this hot/dry season time of the year, the grass had mostly been burnt.  Here the fire-loving suffrutex were well exposed.  A fine “dwarf-shrub” suffrutex, Parinari capensis covered an area of about 40m by 30m.  This “sub-shrub” which must weigh as much as a full grown Msasa has an estimated 90% to 95% of its woody mass underground, with the above surface growth reaching no higher than 20cm.  It is a paradox that massive suffrutex like the P capensis should be referred to as “dwarf-shrub” or “sub-shrub”.  Included in both the tree list, and the suffrutex lists below are Brachystegia spiciformis and  Parinari curatellifolia.  Normally both these species are trees, but rarely they are found in suffrutex form, when, as occurred here, these grew in isolated slightly raised and drier areas within the moist vlei, where they were able to establish a foothold, but not to grow to tree height due to repeated burning.  The suffrutex Ficus verruculosa is an exception in that it is not a pyrophyte.  It appears to grow in areas that are permanently moist where fires are excluded.  As a result much of its branch network is above ground.

There will be a Memorial Service for the late R.B. (Bob) Drummond at the Christian Counselling  Centre, Coltman Road (off The Chase between Pendennis Road and Waller Avenue)  on Saturday November, 22, 2008 at 10 am. Tea will be served afterwards and it would be appreciated if you could bring a small plate of eats or a packet of biscuits. Contact:  Hugh or Ginny de Robeck on 744508, 0912 269502 (Hugh) 0912 262470 (Ginny) or e-mail hderobeck@mango.zw. Bob Drummond on his 80th Birthday

Bob died at home in Harare on 3 June 2008 of heart failure at the age of 84. He leaves a widow, Joan, daughters Jean and Janet and grandsons Gavin and Ryan, to whom we extend out sincere condolences.

Bob’s passing away leaves a huge gap in botanical knowledge throughout the region.

I am sure, in fact I know, there are many people interested in something to do with a plant that visited the National Herbarium in the Botanic Gardens in Harare and came across Bob Drummond. And probably most people who went there and met him won’t forget the experience.  Bob was as interested in people as he was in plants and his memory of the people he had met was as remarkable as his knowledge of plants. While identifying the plant, which he seemed to be able to do almost regardless of the state of the specimen, he would become enquiring and want to know all about the person as well as the plant and where they both came from and he remembered that and the peoples names.

Bob was very much his own person. Usually, he was interested and charming, but he could also be non-committal, abrupt or even rude. He was very generous and always said yes when asked to do something, whether he could manage it or not, and expected everyone else to do likewise. On one occasion he was helping me check names for the book and said he would be at my house about 8.30 a.m., several postponing phone calls later he eventually arrived at 7.30. p.m.

Bob Drummond studied Botany and Zoology at Leeds University graduating in 1948. I was once told that they couldn’t refuse to give him a degree. He could identify and name every plant in the United Kingdom. No wonder he chose to come to Africa! He was able to identify and name very very many of those too. He joined the Herbarium in 1955 and worked there for 38 years including nine years after he had officially retired and even after that was often seen there.

In 1953 Bob undertook a nine month trip to East Africa with J.H. Hemsley under the auspices of the Colonial Office and collected some 4800 specimens. He told me how in those days there were no plastic bags to collect into and so specimens had to be put into the press immediately. That must have been hard work but very disciplined.

I remember when Bob came on a Tree Society trip I organised to Rukomeche Camp on the Zambezi River at Mana, when Garth Thompson was running it. This was towards the end of April and there had been late very heavy rains and the rivers were flooded so everywhere we went we walked, including through the flooded rivers. One walk, having forded the river up to our waists in water, was more or less an all-day affair. We reached a pre-arranged point and travelled back by canoe. But in the meantime it was pretty hot and quite a trek and at one stage Bob seemed to have got left behind. I was getting seriously worried … and then the somewhat overweight Bob appeared, rather flushed with the heat, a huge fertiliser bag full of plant material in his hand and a very smug look on his face. He had had a ball. Had we seen this and had we seen that and of course we hadn’t, but he had.

Bob did a number of collecting trips in Botswana, Malawi, Zambia and Zimbabwe with various botanists and his collection numbers total over 10,000. There are 13 species named after him, ranging from orchids to legumes, and there are many species where the type specimen is one of his collections. He assisted with, and identified specimens for numerous schools expeditions.

Bob was Curator of the Herbarium for much of his time there and he always kept up to date with the taxonomy and nomenclature. Unfortunately, he lost touch at the end trying to do everything himself. He really enjoyed compiling checklists and was working on one for Zimbabwe right up to the end and I have an idea there are reams of continuous printer paper with hand-written lists of plants names among his papers. Two checklists which he published were in 1972: A List of Rhodesian legumes. Kirkia, Vol .8 part 2. And in 1975: A List of trees, shrubs and woody climbers indigenous or naturalised in Rhodesia. Kirkia, Vol.10, part 1

In addition there are a number of books where, although not an author, his contribution is acknowledged including Keith Coates Palgrave’s Trees of Southern Africa. He made an enormous and invaluable contribution to that including checking the whole of the original text. It was a lot of work and Keith had to use a lot of patience to persuade Bob to keep at it. He used to give him 30 pages at a time and sometimes when he returned the checked pages his comment was “You can’t say that”. Whether Keith did or did not follow his advice I don’t remember.

Bob Drummond’s biggest contribution to botanical knowledge in Zimbabwe is the information he passed on to all the people who came asking about a plant. I asked him about many and remember with gratitude the contribution he made to my knowledge of trees and plants.

A Sign of the Times?[The following letter was posted on Mango News on October 21.                             –Ed.] Subject: Harare Botanic Gardens We go for a walk, most evenings, around the botanic gardens here in Harare. A few months ago we noticed that there was some discreet tree felling going on but it was quite sporadic. Most of the trees that were chopped down then, only one or two a month, were quite small and not terribly noticeable. Well that has changed. This evening we noticed that over 30 trees had been “harvested” and many of them were large mature indigenous ones. Several, about eight, had been removed from the “rain forest” area. Several in the area along the Sandringham Drive fence line. A few in the area bordering Borrowdale Road and inside the natural forest near the National Parks offices. Around the old, now dried-up, duck pond, a number of smaller trees have been taken. My advice to those of you who enjoy the Botanic Garden is get along there now as it looks as if there is a definite program to allow people with connections to harvest the forest for firewood. We noticed, for example, that the employees’ compound was well stocked with a lot of “green” chopped timber. We also noticed a few people sitting along the inside of the fence along 5th Street quite near dusk. It is a shame that such a valuable public amenity should be so ravaged but I suppose it is just a symptom of the times we live in and the absence of any real administrative authority any longer. 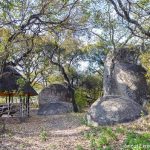 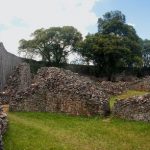