Saturday May 2nd : No Botanic Garden Walk as Meg and I are addressing the Zambezi Society in Mana Pools, therefore the walk is postponed a week.

Sunday May 17th : Notice is hereby given that the 37th annual General Meeting of the tree Society of Zimbabwe will be held on Sunday 17th May 1986 at 1000 hours at Spey Bey, Ruwa.

Any proposals/resolutions and nominations for office bearers should be sent well in advance to P.O. Box 2128, Harare.

Please note your chairman has now completed his second year in office and will be standing down from that position.  Would all members please give careful consideration to the future running of the society.

Saturday May 24th :  Mukuvisi Woodlands Walk.  Starting in April the Tree Society has agreed to host a woodland walk on the 4th Saturday of every month.  All welcome to join in.  Meet at 1500 hours at the corner of Paget Road and Inyanga Crescent.

Sunday May 3rd :  we will go to the Old Bulawayo Area, up the Chiterion Road.  Meet, either at Bradfield Shopping Centre at 0830 or by Upwey Riding School Junction at 0846 hours.  This will be a morning outing only. On Sunday April 5th we went to Mabukuwene and there identified some 65 tree species.  For the past month or so it has been very hot and dry, and so it was this day.  Also as the soil, in many cases, there is both shallow and rocky, many of the species seen, had unusually small leaves, apparently signs of Poverty.  There is, however, a good variety of Trees and not all are so affected, especially in the flatter spaces. Driving out towards Shamva the countryside becomes very broken and valleys fall away on either side.  Having skirted around the Domboshawa granite the road leads back onto the Mazowe/Bindura greenstone belt.  Approaching Woodlands the narrow road is flanked by superb miombo woodland on the sloping hillsides with tall muwanga, Pericopsis angolensis and Cussonia arborea.  At last we dropped into a valley to find a winding line of Cordia abyssinica covered in white flowers.  These trees were well worth the planned visit.  Each is a tall specimen with finely striated bark standing beneath one one is aware of their distinct architecture in which the leaves form a narrow layer on the outside leaving a tall vaulted archway underneath.  The flowers are not visible from below although the ground is coated in the little white “blooms” with which the kids played “pixi hats”.  The first leaves we could reach were unusually smooth and hairless but the petioles and young branches on sucker shoots soon demonstrated the abrasive hairs that generally characterize the BORAGINACEAE. This family was only called the ASPERIFOLIAE which refers to the rough harshness of the leaves.  The Latin word asper is maintained in the English term asperity which refers to harshness of temper or tone, as in spoken with asperity.  It is difficult to estimate the ages of these trees although Tom’s Cordia are only twelve years old and stand a good 20m high, so in well watered areas their growth may be rather remarkable. The narrow stream was not flowing and so we made our way up the dry river bed where we found Zanha golungensis.  Besides small specimens we also found a real forest giant although in all of them it was still too early in the season to demonstrate an excellent “ball and claw” bud.  Stereospermum kunthianum showed the arthritic elbows of its compound leaf and the poison pod Albizia versicolor was yet another of the rarer species.  In the August Flora Zambeziaca, Prof Wild referred to the “fearsome branching spines” on Flacourtia indica and we were able to see excellent examples of this.  Bequertiodandron magalismontanum and Mimusops zeyheri represented the SAPOTACEAE.  Friesodielsia obovata showed the features we associate with the ANNONACEAE but a bit further on we were faced with a new mystery that looked like a different ANNONACEAE.  This was confirmed by finding tiny pellucid gland clots in the leaf.  These are common in the ANNONACEAE and secrete aromatic oils which are similar to citrus oils.  It is interesting that the swallowtail butterfly genus, Papilio is divided into two sub genera and while one sub genus feeds on citrus trees, the other sub genus, Graphium, eat members of the ANNONACEAE.  This chemical similarity is co-incidental as these two families are not related to one another.  The plant in question was Annona senegalensis, although we needed to find a specimen growing in the sun before we were really sure.

A Mazowe rough lemon tree proved a most rewarding stop, the tree was covered in fruit despite its growing in heavy shade.  Most of us collected a small stockpile of fruit, which resulted in numerous hot lemon juice and honey drinks during the next few days when the flu decided to knock me out of action.

We passed along the retaining wall and returned to the bus along a wide path with Ficus thonningii and a tall Schrebera alata.  Margaritaria discoidea showed the stipules that separate the EUPHORBACEAE from the ANNONACEAE and we puzzled once again over the distinctive smell of Pavetta gardenifolia leaves, but still could not place the scent.  We had first hit the smell the previous day when Meg’s key separated Clerodendron from Pavetta on smell.  This has since been changed.  The morning walk had been most informative, yet relaxing in the depth of riverine shade, despite the typical Shamva heat.

The afternoon walk was intended to begin along the road and to proceed into the bush at the nearest possible path. However, the vegetation remained very dense on either side of the road, and we never found a path at all.  However, there was enough of interest to keep us going.  The diversity of species in the area was such that it was difficult to really specify a dominant species, though Julbernardia globiflora, munhondo, was probably it.  However, there were numerous large Pericopsis angolensis, unfortunately not I flower.  Jill Masterson had earlier pointed out how many dead branches these trees have and they are black and strongly in contrast to the white of the living trunk.  Pericopsis is also known as “muwanga” and as “afromosia” in the timber trade, where its timber quality is much admired. Having seen Ximenia americana in the morning it was interesting to find it again, growing next to the other species, Ximenia caffra.  X.caffra has very furry leaves and single flowers whereas X.americana has glabrous blue green leaves, and flowers in clusters.  The latter was, in fact, in flower.

There were large bushes of Bauhinia all along the road, and nobody was prepared to say in the absence of flowers which species it was, although B.tomentosa was eliminated as the leaves were glabrous.  As it turned out there was both red flowered B.galpinii and white flowered B.petersiana.  Both were in flower and pod and in fact the pods are easily distinguishable; those of the B.galpinii being smaller, flatter and with strong ridges along one side.  The pod of the latter is smooth and swollen looking without the ridge.

It is of little value to list all the species we saw, however, one that we usually overlook was very attractive in yellow flower.  This was a small Crotalaria, species uncertain; in a group in full flower with the rounded inflated looking pods typical of Crotalaria they made a bright patch in the bush. Many thanks to patient husband and to Kim for removing ailing and tired children long enough for me to do the afternoon walk.

On the journey homewards we passed another magnificent Cordia in flower and we all smelt their scented blooms.  Travelling back via Bindura Meg commented on all the Acacia species flowering late, back in Harare we have seen these unseasonal flowers on Acacia sieberiana, Acacia polyacantha and, most surprising in Borrowdale, we have a tall Securidaca longepedunculata in full flower.  Before Bindura we stopped to see the Bindura Bamboo Oxytenanthera abyassinica. 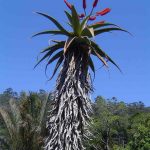 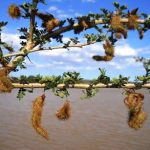