Sunday January 18th : Alamein, Beatrice : Home of Mike and Shirley and Guy and Victoria Watson Smith. The road between Harare and Beatrice travels over granites of the Basement Complex.  Beatrice itself is on a small patch of greenstone but south of Beatrice a broad east west belt of Karroo sands lies on top of the Basement Complex.  Part of Alamein is on these Karroo sands and here the Brachystegia woodland is very well developed with magnificent Monotes, Lannea and Ochna pulchra.  On the lower areas of the farm these surface deposits are absent, instead patches of mopane with Combretum imberbe and C.hereroense.  We plan to spend the morning in this vegetation, have lunch on the farmhouse lawn and spend the afternoon on the Karroo.  If it rains we will shelter in the farm house.

On Sunday 7th December we went to the Circular Drive, just off the Old Gwanda Road, and identified some 50 trees, plus a few uncertain.  Among the 50 were 3 species of Acacia, Acacia gerrardii was widespread, plus Acacia nilotica and Acacia rehmanniana, Albizzia antuneaiana, Azanza garckeana, Berchemia zeyheri with very young leaves, Brachyleana rotendata, Burkea africana, Canthium lactescens, no however milky, Canthium lividium, huillense, Carissa edulis, Clerodendrum glabrum and Clerodendrum myricoides, only small Commiphora africana and Commiphora schimperi, Diospyros lycioides, Euclea divinorum and a very small leaved Euclea that we took to be E.undulata in flower, the only fig was probably Ficus thonnigii, Flacourtia indica with young and tender atypical leaves, Grewia flavescens, Grewia monticola, Lannea discolor, Maytenus hererophylla with smallish leaves, but not so small as the Matopos subspecies, (subsp. puberula), Maytenus senegalensis, Mundulea sericea, a lot of Pavetta schumanniana, Pouzolzia hypoleuca, Rhus pyroides, Strychos cucculoides and Strychnos spinosa, Terminalia sericea and Terminalia trichopoda, Tetradenia brevispicata, Iboza), Turrea nilotica was faily widespread, Ximenia caffra, usually dark green and in fruit and also quite a few Ziziphys mucronata. Our less certain ones, apart from the Euclea undulate, included a small leaved Grewia with serrations too fine perhaps for Grewia tenax, but the stems were rounded; a very dark bronzed and curly leaved Catha edulis; also an unidentified tree with young small leaves compound with several leaflets and white flower spikes not yet opened well.  We hope to keep a check on this for further clarification.

Not finding Tom in the Herbarium at 1655 hours and considering the flashes of lightning, we cancelled the walk.  But Tom had not forgotton and had rushed back for the walk, and we could have had it in the Herbarium itself, there are so many things we really want to see.  Anyhow, they will wait for another time.

The scavenger hunt organized by Meg proved to be a great success.  Armed with one bag for collecting litter and one for specimens the 5 teams headed into the woodland.  I must confess to having known exactly where to find the Tarchonanthus, but I think we all learned how difficult it can be to find very common objects, our group failed to find a galled Parinari leaf, whereas Sybil’s group collected a prize specimen.  As for the feather, the woodlands must be devoid of birds.  Many thanks to Meg I think we all gained a great deal, and enjoyed it too.

.Having bid farewell to the majority of the contestants in the morning scavenger hunt, the long stayers were invited back to the woodland for a working session on Meg’a “Key to the Trees and Shrubs of the Mukuvisi”.  The Key is the result of a vast amount of research and observation.  We tend to walk in the bush identifying many species with ease, but to produce a guide for the complete newcomer requires much attention to small features which distinguish one species from another.  And Meg’s insistence that the key be used by many different groups has brought to light many pitfalls.  We were fortunate to have in the group a new member who had no knowledge of any of the species to be identified.  The fact that she was able to follow the key almost faultlessly was a tribute to both her and to the construction of the key.  Several amendments were made to the key due to such things as a Maytenus senegalensis with no spines, and to a far greater similarity between Monotes glaber and Monotes engleri at this time of the year than when Meg first constructed the key.  Those “blue green Parinari – like leaves of M.engleri were almost indistinguishable from the Monotes glaber leaves.  Having sorted out a dozen or so species we walked back examining some new additions to Meg’s list, including “Pseudathria hookeri” aptly named as hooked hairs on the upper surface will attach to clothing.  The key looks to be a valuable teaching aid to the Mukuvisi education programme, and Meg’s technique of photocopying the leaves is especially pleasing. 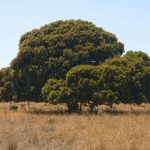 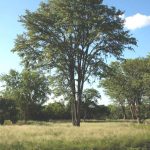