Saturday 7th July:  Botanic Garden Walk.  Meet in the car park at 8.30am.  Hope to see you there, this walk should last about an hour and a half. We’ll look at Mahoganies.

Sunday 21st July: Visit to the Cossey property in Goromonzi, by kind invitation of Heather Pocock.

TREE OF THE MONTH Winter-flowering senna This time of the year in Zimbabwe is bright and colourful: think of those fiery red Erythrina flowers,  and  grasslands turned to gold by the soft winter sun. Think too of that small tree, barely  more  than  a  shrub,  with  its  striking yellow flowers. It was once called a Cassia, now it’s known as the Winter-flowering Senna, Senna singueana. It is our tree of the month.

The ones at the Mukuvisi Woodlands were just coming into bloom when the Tree Society held its AGM there in May. The tree is a member of the legume family, Fabaceae, and its pods are another striking feature, ripening to yellow around September. Unfortunately, this tree isn’t as common on our streets or in our gardens as Senna spectabilis, the Yellow Shower or Spectacular Cassia, which is native to tropical America. So, once again, a comely indigenous tree has been upstaged by an imported rival.

It’s not just a pretty tree, our Winter Senna. Recent studies have shown that it has important properties to help treat malaria. That’s interesting. The only medicinal and cultural uses ascribed to it in the 1977 edition of Trees of Southern Africa were for the treatment of stomach pains and the chasing out of devils. It was Cassia abbreviata, the Long-tail Cassia or Sjambok pod, that the book mentioned as having antimalarial properties. In 1902, it says, the physician O’Sullivan Beare realized that some people in southern Africa used an extract from the roots to treat blackwater fever. He tried it on himself, found it to be effective, and started to produce it commercially. Being from Manicaland I was more familiar with C. abbreviata than S. singueana. The former is more abundant at lower altitudes, flowering in early spring like a small miracle of nature in the arid, dusty lands around Birchenough Bridge. I would also see it when driving through the drier farming districts in the lee of Mutare’s Cecil Kop and Mutarandanda Hills.

It was only at a Tree Society outing to Mukuvisi Woodlands in November 2017, shortly after I moved to Harare, that I first got to know about S. singueana. On a cold, overcast afternoon we were shown that useful ID tip: look for the “bee stings” between each pair of leaflets. The Tree Society “gurus” tell me that these tiny spikes mark the position of leaf glands: nectar-producing organs that attract insects like ants, which could in turn protect the tree. Another useful field characteristic when it’s late in the season and the flowers and pods are gone, is the rough, deeply-fissured bark.

The tree grows as far north as Ethiopia. In fact its specific name is derived from Singu, a region in Ethiopia where it was first collected for science by French explorer Frederic Cailliaud (also credited with helping to decipher hieroglyphics). Around about the time he first collected a sample of the tree, he also joined a military expedition to conquer the nearby Kingdom of Sennar in what is now Sudan. I wondered if Sennar could be the origin of the tree’s generic name. But no, it seems Senna is merely derived from the Arabic word sana, meaning the group of plants whose leaves and pods can be used as laxatives.

This delightful park (the land for which was donated to Harare City Council many years ago by the Ballantyne family who lived nearby, and which saw a few dubious years when a local businessman took it over to develop into private houses and gardens) has been lovingly restored to nearly its former glory by residents in the area.  The dam wall was strengthened after the last heavy rains and the Park now boasts a playground and fitness centre.   Meg Coates Palgrave has been on the restoration committee and, together with Tony Alegria, led the walk.  We were a group of 19 in total and we stuck to the well-used paths in about half of the Park, Tony wasn’t keen on the blackjacks! We identified and discussed 33 species in all – the Park was originally planted with mainly exotic species, some of which we did not recognize, but all of the newer plantings have been indigenous species.  There were also a few beautiful larger Brachystegia spiciformis and Julbernardia globiflora, as well Erythrina abyssinica, which presumably were left when the area was originally cleared.  And of course there are the large Acacias along the watercourse, which weren’t included in our walk.

The other indigenous species we identified were:

Thank you to Meg and Tony for an interesting walk. It was good to see the Park so well-kept and being used by adults and children alike.

On the chilly but beautifully sunny morning of Sunday 16th June, five Tree Society members (Tony, Meg, Graham, Bilal and I) met at the CABS car park and were kindly offered a lift out to Ewanrigg by Tony. We parked in the lovely picnic area and, once there, met up with Jim Dryburgh and Tieg. Then an interesting family who were originally from the Umvukwees joined us – Kevin O’Toole and his wife, and their dog Guinness, their son-in law Ed Lindsell from Northern Zambia and Ed’s brother Patrick all the way from Colorado. Ed and Patrick were in Harare after the recent death of their mother at Malvern House. They proved to be knowledgeable about trees, especially Ed who had studied forestry in the UK.

Tony was an informative leader, giving us all a good botany lesson on the technical terms of various leaf formations. Having looked at several trees in the picnic area, we walked up the hill as far as the quinine tree. Just tasting a tiny bit of the bark gave a bitter taste. On passing a tree with large thorns and a rough bark, Ed commented that it was ‘just like Guinness with a rough bark and vicious teeth’!

Bilal left us rather early on in the walk and we assumed he had gone off to do some researching of his own. Imagine our surprise when, on arriving back at the picnic site, Bilal had a roaring fire going and was preparing to braai chicken pieces for all of us! The chicken proved to be delicious and we were all very touched by his thoughtfulness and generosity and lingered rather long over our lunch.

Before heading back to Harare, we went to look at the section of the gardens where all the pine trees were and saw many different and interesting varieties. We would have liked to stay longer but Meg and I were going to a concert and so the botanising was cut short and Tony gave us an exciting ride back getting us home just in time to catch our lift to the concert.

Altogether it was a very enjoyable outing and special thanks must go to Tony and Bilal.

A small group of us met on a beautiful June afternoon at Harare’s Greystone Nature Preserve. We were led by Mark Hyde, so the walk included insights into more than just trees. With us were two other botanists, Meg Coates Palgrave and Fay Robertson. The park is a mixture of grassland and exotic and indigenous trees. The first indigenous tree to grab our attention had small yellow berries and what the botanists described as a “slightly scruffy” look. It was Pittosporum viridiflorum, the Cheesewood.

The scruffy look is caused by a mis-shapen leaf, possibly the result of a virus, that invariably appears in each leaf whorl. The affliction is consistent enough to be a useful field characteristic for the species. It never looks pristine, said Mark.

Mark then waded through thick grass for a closer look at the flowers on a Sand Olive, Dodonaea viscosa. It grew beneath a Silver Terminalia, Terminalia sericea, which someone said is also known as the “smelly socks tree”. That was news to me. Apparently, the flowers on this lovely tree are unpleasantly scented. So much so, said Fay, that some nurseries even refuse to stock it for fear of offending customers. The smell, of course, is the tree’s clever way of attracting pollinators.

Roger Fairlie, chairman of the Preserve, joined us on the walk. He was keen to know which trees are alien and should be removed. But as the next tree we came across demonstrated, this is not always easy to decide. The tree was Phoenix reclinata, an indigenous palm. But, just like the Acacia goetzei trees we saw in the car park, it isn’t indigenous to Harare. Mark said the palm, which occurs naturally in places like the Great Dyke, was probably an escapee from a garden. But with its bright orange flowering stems and fruit, it is an attractive asset that is worth keeping.

A ‘tree’ we might have missed, had it not been for its bright red flowers, was only ankle-high and hidden in the grass. It was Combretum platypetalum subsp. oatesii, or Red wings. This is a dwarf suffrutex shrub and it was in flower unseasonably early. Mark said it’s something he’s noticing more now – spring-flowering plants having second flowering times. Not far from the Combretum we came upon a thicket which Roger said doesn’t attract much in the way of foraging birds when in fruit.

It was Diospyros lycioides, subsp. sericea, the Red Star-apple. Its leaves have blackened surfaces, suggesting the plant contains some sort of toxin to make it unpalatable to browsers. All except black rhinos, that is. Rhinos love the Diospyros, said Fay. The next tree we came to is also known to be highly toxic, and according to Fay is also eaten with enthusiasm by black rhinos. It was Euphorbia ingens, the Candelabra tree. A lovely specimen was growing in the north-eastern corner of the preserve where two other species had been planted next to it: E. griseola and E. cooperi. Greystone Nature Preserve could well be called Vernonia Nature Preserve. We had seen Vernonia amygdalina, the Tree Vernonia, in flower beside the path. This is more of a shrub that has been awarded honorary tree status. We also passed Vernonia myriantha, a species abundant in the Vumba. Mark pointed out the ear-like stipules that give the plant its common name, the Eared Vernonia.

At the end of our walk we noticed a Vernonia whose leaves were decidedly wavy and whose petioles  were  long.  This  caused  Meg some excitement. Could this be V. colorata, the Lowveld Tree Vernonia? If so, it would be an unusual find because as its common name suggests, it is usually a low-altitude plant. Many more surprises await us I’m sure in this gem of a park in the heart of Harare.

The subscriptions are now overdue.  If you have not paid please settle, soonest. 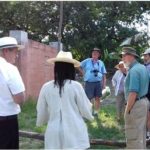 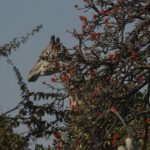