Saturday April 7th: Botanic Garden Walk. Meet in the car park at 8.30am for an hour and a half in this lovely garden.

PLEASE NOTE there will be no 3rd Sunday outing in April because of the Hippo Pools trip.

Saturday April 28th: Outing to Mazowe Springs by kind invitation of Barbara Kockett. You will remember the delightful afternoon we spent there a couple of years ago. Barbara will decide which areas we will visit – the vegetation might still be a bit thick to get down to the springs.

NOTICE OF THE ANNUAL GENERAL MEETING OF THE TREE SOCIETY

Notice is hereby given that the 68th Annual General Meeting of the Tree Society of Zimbabwe will be held at the restaurant at the National Botanical Gardens on Sunday 13th May 2018 at 9.30 am.

Any proposals/resolutions and nominations for office bearers (and any volunteers to be on the Committee) should be forwarded by email to the Secretary Teig Howson at teig.howson@gmail.com by Sunday 29th April if possible, although proposals and nominations will be accepted from the floor.

After the AGM there will be a tree walk in the Gardens.

N.B. Tea/coffee and eats will be provided.

The group of about 12 parked their cars on the north side of Josiah Chinamano St outside the Police Headquarters and assembled at the north-west corner of the park, proceeding along the western path.

Greenwood Park was started as a recreational area for the nearby city dwellers in 1964 by a group of Harare Round Table members and large numbers of both indigenous and exotic trees were planted. Sadly in recent years the Park, which fills the block between 7th and 8th Streets and Baines and Fife Avenues, and is probably better known for the steam train rides in the southern portion, became very dilapidated. However, recently, members of Junior Chamber International – City (JCI) Zimbabwe have started a project called ‘Fix-Up Greenwood Park’ as part of the drive to turn this situation around. Apart from the steam train, there is also a large grassy area in the northern section, filled with majestic trees, that includes a well-equipped children’s playground. 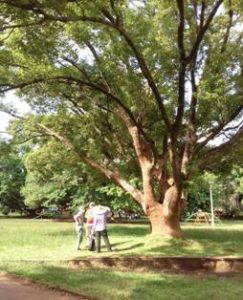 JCI asked for help from the Tree Society in labelling the trees – they were keen to show the common and scientific names, as well as the local uses of the trees. Tony Alegria, Jan van Bel and Mark Hyde identified about 80 trees in the Park and labelled them first with a number while the plastic labels with full names were made through City Parks. Despite several of the metal numbers having disappeared before the final labels were attached, the plastic labels seem to be surviving. The Park is used both by families with children who enjoy the playground, and adults enjoying the green surroundings. And the grounds are at present being well maintained, which is good to see.

The trees in the park have been well labelled but it was noted that it would be useful to have the Shona names in addition to the existing Latin and the English common names. A list of all trees seen follows, but those that stood out were:

• A large Baobab which took five people with arms extended to encircle the trunk and which was in fruit.
• A large Camphor tree – Cinnamomum camphora (exotic).
• A Ginkgo biloba visible through the fence of the children’s playground near the south-west corner of the park
• Bauhinia tomentosa which was in flower (a beautiful yellow) and which was unlabelled and not on the Greenwood Park list.
• Antidesma venosum, the Tasselberry. As Meg says, all trees have labels and this one’s label is the dead looking flowers which have been parasitised. 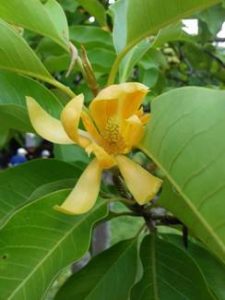 Three trees which were not listed on the Greenwood Park Tree list, but which we saw on our tour of the Park were: Ceiba speciosa, Schotia brachypetala, and Lannea discolor.

We had a very pleasant afternoon in Greenwood Park and maybe we should pay another visit to this delightful green space in the City Centre. Does anyone know the early history of the park i.e. who designed it and any other early information? The name Greenwood Park is so apt and as a school girl at the Convent I can remember happy times there – it was already well established in the 1950s and a lovely place for a walk from the Convent. So if any of you

Sunday 18th was a pleasantly well-rounded day at Mockingchat, home of Rowan Martin and family. Thirteen members came to enjoy a day of lovely weather, pleasing surroundings, birds, bees, spiders and music while we picnicked. And, of course, some good botanising, made easier on the kopje slopes because Rowan had cleared a path up and over the kopje. I think I can speak for us all when I say it was a happy outing. 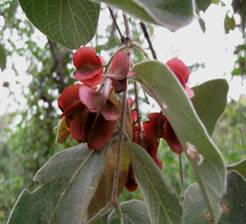 I was pleasantly surprised to find that the road to the property had recently been graded and was hugely improved compared to the last time I was there, but even so there were some of the party who needed a strong cup of coffee on arrival, having negotiated the challenges of the road for the first time.

A very large Phyllanthus reticulatus growing near the entrance is what we looked at first and there was an immediate debate as to whether it was or not, some thought its leaves were too big – no decision was made. We wandered down the steps into a parkland of big trees and beautiful lawns sloping gently down to a dam on the border of the property. The lawns were studded with big trees – Acacia abyssinica, A. galpinii, A. gerrardii and A. nigrescens, Ficus burkei the Common Wild Fig, interspersed with Strychnos spinosa
all laden with fruit; Gardenia volkensii; Gymnosporia senegalensis, the Confetti Bush; and a very large Syzygium, what we thought might be Syzygium guineense, Woodland Waterberry, but it was decided that it might be a planted (as are most of the trees on the property) Syzygium gerrardii, Forest Waterwood. Albizia gummifera caused some debate as well with its large leaflets. 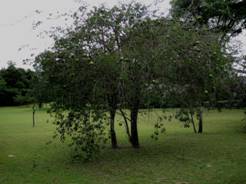 Nearby we saw Parinari curatellifolia, Acacia polyacantha, Searsia longipes and Maytenus undata, the Koko Tree, with its leathery, discolorous leaves and growing around its base a mass of the sticky Desmodium creeper, with its pretty leaves. I can remember this being a great favourite of my pony when I was a child – happy memories. 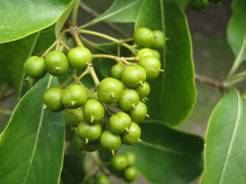 By now we were down at the edge of the dam and as we headed slowly towards the kopje we came across many Combretum molle, Velvet-leaved Bush Willow – Meg’s ‘Wish tree’; Erythrina abyssinica, Diospyros lycioides, Red Star Apple with fruit, some of which were ripe and were delicious; Ficus sur, Broom Cluster Fig and Ficus burkei, the Common Wild Fig; and a magnificent specimen of Peltophorum africanum, African Wattle; Celtis africana, White Stinkwood. Growing heartily in the Peltophorum was a very happy Mistletoe, Loranthus sp.
As we started up the kopje we noted Acacia amythethophylla, Large-leaved Thorn; Senna singueana (formerly Cassia); Tarenna neurophylla, Common Tarenna, Coptosperma neurophyllum, Kopje Butterspoon and Heteromorpha arborescens, the Parsley Tree. 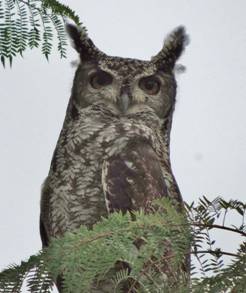 In amongst the rocks of the kopje Rowan showed us his “hot tub”. Cleverly built into the rocks and under beautiful trees, this is heated by a discreetly hidden “Rhodesian boiler” – very inviting. Nearby and nearly under a beautiful big boulder lies Rowan’s mother. What a wonderful place to spend, peacefully, your time in eternity.

We then headed back to the picnic area where we were all ready for a cold drink. A delightful place to eat our picnic lunch and then to round it all off, a bagpipe recital by Rowan. Thank you Rowan.

While all this was happening we were lucky to have with us keen bird watchers in the form of Ian, Peter and Teig, who identified 42 different bird species. What a pleasure to combine bird watching with tree identification, butterfly spotting and even (spotted by Barbara) 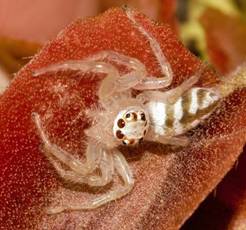 a magnificent jumping spider. It makes it all so much more interesting, thank you Ian, Peter, Barbara and Teig for your contributions. 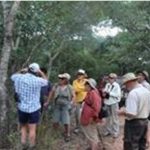 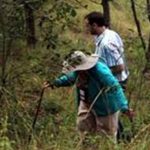