Sunday 21st February: Return visit to Mountain View Farm in Bindura by kind invitation of Tim and Ruth Kilner. Our last visit there was in October 2014 when it was very hot and leafless but there was much to see. We are hoping that if they have had some rain, it will be very different. Bring tea, lunch, drinks, chair, hat and sun cream. We will meet at CABS at 0800 hours for an 0815 take off.

Saturday 27th February: Visit to the home of Graham Mills, off Enterprise Road 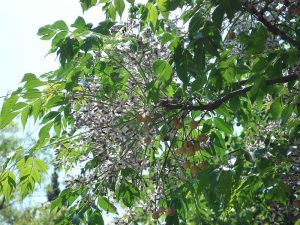 Melia azedarach, pronounced MEE-lee-uh az-ER-duh-rak and also most commonly known as Syringa, Family Meliaceae, the Mahogany family. It is a deciduous tree that is indigenous or native to SE Asia: India, down to Sri Lanka and tropical China, to the South and to the East, through Malaysia and New Guinea to tropical Australia and the Solomon Islands.

Syringa, sometimes mistakenly pronounced as “slinger” because children use the seeds as catapult ammunition, has established itself virtually all over the temperate and tropical world and therefore acquired many common names, including White Cedar, Chinaberry tree, Bead-tree, Cape Lilac, Persian Lilac, Indian Lilac, and Seringboom in South Africa, where it is particularly regarded as a nuisance. It is also known simply as Azedarack, not be confused with Azadiracta indica, the Neem tree, which is prized in India and used as a vegetable and in traditional plant medicine. The Syringa, by contrast, is highly toxic. So, be sure not to confuse the two, which are in the same family, but from different genera.

The leaves are bipinnately compound, imparipinnate, with serrated margins on the ovate leaflets and can grow up to 50cm long. The leaflets are alternate; long-petioled, dark green above and lighter green below and turn yellow in autumn. 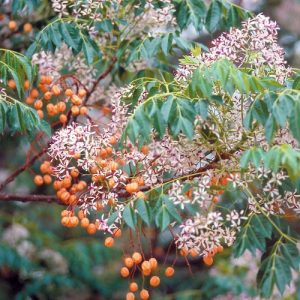 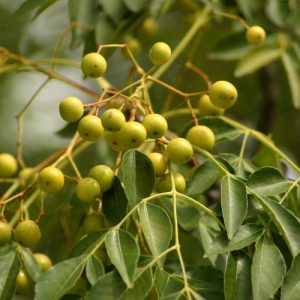 The flowers are small and fragrant, with five pale purple or lilac petals, growing in clusters.

The fruit is a marble-sized drupe, light yellow at maturity, hanging on the tree all winter, and gradually becoming wrinkled and almost white. The berries are poisonous to humans and various animal species if eaten in quantity, but not to birds which are the major seed vectors. Accidental ingestion by humans will cause respiratory distress, dilated pupils and seizures. Most cases are mild but fatalities have occurred.

Syringa trees were introduced as ornamental plants originally from India and established first in Barberton in South Africa in 1906. Now they are a major problem, particularly in KwaZulu Natal, as invaders of natural vegetation – they spread like wildfire, grow fast and easily in the southern African climate and are difficult to remove. 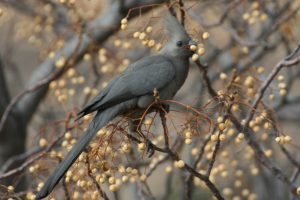 A Grey Touraco, formally known as the Grey Lourie, helping to spread Syringa.

The Syringa competes with and replaces indigenous species. The abundant and prolific growth of this species at the expense of the native flora and fauna could have serious consequences for the preservation of biodiversity. Dense stands along watercourses are likely to reduce stream flow. Indigenous birds could neglect the dispersal of indigenous plants and as a consequence of their preference for the fruits of this alien species. The effective seed dispersal by water enables this species to invade protected areas far from the parent plant.

Once again Bill and Fiona opened up their lovely home and property, Val d’Or, for us to enjoy the last Tree Society function of the year, our annual Christmas Party.

About 25 of us gathered on a beautiful crisp morning – which grew into a jolly hot day – and enjoyed tea and Christmas goodies and chatting to old friends, I think we would have all been quite happy to spend the rest of the day “blobbing” in this lovely garden, crystal clear swimming pool, good company, good food, good weather – but no! Bill, in his usual way, very soon got us organised into three teams for a tree scavenger hunt. Thirty trees to be found amongst the dozens of species on this 64 acre property. We could not cheat either, because each specimen had to be placed in a labelled plastic bag and checked by the authorities at the end!! Having gathered ourselves into three teams we set off, each team in a different direction, with great enthusiasm as now our competitive spirit had kicked in. We had 60 minutes to collect our 30 species and by now it was very hot. No problem, we were fired up. Well, the results of this scavenger hunt were very interesting as all three teams collected 27/30 – except one team got away with only bit of a dead leaf of the 28th specimen – Securidaca longepedunculata – while our team was able to find flowers of that one!! Interestingly the three missing specimens in each team’s collection were different. A very good time was had by all, in spite of the intense heat.

Then, more re-grouping! We now had to gather ourselves into four teams to be challenged by Adele’s annual Christmas quiz. As always, Adele had us stumped on the most logical and easy questions! Where does she find all this? We had our other quiz master in our team, in the form of Richard, and even he was fooled. It was Mark, in his quiet, unpretentious way, and with his incredible memory for trivia and every other thing, who was able to guide his team through to the winning post. We salute you Mark, as always.

By the end of that we were more than ready to open a beer, have our lunch and get on with the party time of the day, but not before our Chairman, Tony, presented small tokens of Tree Society’s appreciation to the people who mainly lead our Tree expeditions: Mark, Meg and Tom. The way they lead us, guide us and try to teach us makes outings and expeditions what they are – extraordinarily good fun. Long may they reign.

And so, to the end of another year – no sign of rain – various other things to be concerned about, but let us talk, share, smile and laugh together and enjoy health, love, harmony, well being and peace. Again, a great big thank you to Bill and Fiona for allowing us to share your lovely peaceful home – what a great way to approach the Christmas Season.

The 2nd January was a very beautifully clear blue morning and there was a terrific turn out for our first outing of the year. Tom Muller, in his inimitable way, led the walk – you are a treat Tom.

It certainly was a good start to the 2016 Tree Society Activities. Tom concentrated on the Terminalias. However, look alike Combretums came under the spotlight when two species of the Combretaceae family were identified, namely Pteleopsis anisoptera which has small (10mm) 4-winged (occasionally 5-winged) fruit and Pteleopsis myrtifolia which has small (15mm) 2 or 3 winged (occasionally 4-winged) fruit. One cluster of dried up fruit had within it both two- and three- winged examples!

The cherry on the top was having Bart Wursten join us, he had arrived in Zimbabwe the night before and came with Mark. Trevor and Sheila Cox joined us from their farm in Juliasdale and brought along a couple of mates, Johnny and his wife and children. Sheila is Tempe van de Ruit and Tessa Ball’s little sister – so good to see you again and wish you could be with us more often. Genaro with all his family – mother, aunt, brother and dogs were with us as well – such a pleasure and thank you for taking time to join us. Then, all sorts of “long time no see” members – it really made for a very special walk.

I’ve often heard that it doesn’t matter how you pronounce the name of a tree as long as whoever is with you understands what you mean. I disagree; I think we ought to know how names should be pronounced, even if we don’t use them as we should! I don’t think Penelope would like to be called PEN-EL-LOPE! She would rather be called PEN-EE or PEN-EL-OH-PEE. We have seen dichotomous as in dichotomous keys but how do you pronounce that? DYE-KOT-OH-MUSS is the correct way!

Botanical names are mostly derived from Latin and Greek and there are many peoples’ names, of various nationalities, used as the species name in honour of that person. This compounds the problem, as now you need to pronounce foreign names in many cases. Dave Hartung has studied classical Greek and Latin and knows how to pronounce many of these unpronounceable names. His vast knowledge has helped in compiling part one of pronunciation of botanical names.

Species names using names of people ending with ‘I’ or ‘ii’ – the single or double ‘i’ is used to denote “in honour of” that person. The general rule (but of course there are exceptions!) is that if a name ends in a vowel, then it gets an ‘I’ but if the name ends in a consonant then it ends in ‘ii’. The correct pronunciation of ‘I’ is EE and ‘ii’ is EE-EE. Another ending to denote “of” that person is ‘iana’ pronounced EE-AH-NA, Now, the correct pronunciation is seldom used and we will go along with how Mark Hyde pronounces the botanical names as he has been leading for some twenty years and no doubt has influenced many, many people. The phonetic spelling must be read as in normal English and is as close as we can contrive to the standard alphabet. 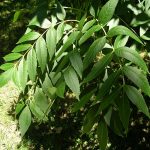 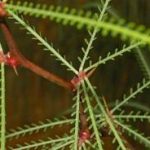