Saturday Feb 7th (NOTE CHANGE OF DAY AND TIME):  Botanic Gardens Walk with Tom Muller:  Meet at 9.00 am in the car park of the Harare Botanic Gardens.

We will meet at the Mukuvisi Woodlands office at 8 a.m. to arrange lift-sharing, leaving at exactly 8.05 a.m.  Late-comers will have to make their own way there.  We meet at Imire at 9.30 am. Please bring chairs, hats, lunch and drinks as usual. There will be an entrance fee of $10 per person.

For those wishing to travel independently, directions to Imire will be available from any committee member.

A return visit to this venue which combines native and introduced trees. We will meet at the usual time of 14.30.

Once through the gate, follow the road to the left and drive to the very end, to the tree area at the top, where we shall park.  Please note that as Ewanrigg is run by National Parks, entry fees will be payable.

Meg Coates Palgrave has been involved with the Tree Society for over 30 years. She reaches her 80th birthday in March this year and the Society is going to celebrate this achievement with a lunch to which you are all invited.

The date of the lunch will be Sunday March 15th and the venue will be the restaurant in the National Botanic Garden.

The cost of the lunch (including wine) is US$20 per person, to be paid into the Tree Society CABS account (100-254-9477 account name W.R. Clarke a/c Tree Society) no later than 8th March 2015. Please make sure your name is reflected as a reference, and also advise the Treasurer (wrc@mweb.co.zw) by email of the date of your deposit.

Meg has made an enormous contribution to our knowledge of trees and has been a part of our lives for so long. It is hoped that all Tree Society members will try to attend the lunch.

The timetable for the day will be;

12:00 noon:  speeches and presentation to Meg

12:45 pm: Lunch  There are no events organized for the afternoon.

We would welcome any people who wish to share their memories of Meg to do so, either verbally at the meeting or, if preferred, in writing before, in which case the material will be read out by the Chairman. This material may be used in the next Tree Life.

Please also remember that there is an entrance fee to the Botanic Gardens.

The Tree Society will be providing some boxes of wine – red, rosé and white.  Wine glasses will be provided. People should bring all other drinks and glasses they may need.

These remain at US$10 per annum and are payable on 1 April 2015. Payment is best made by a deposit direct to our CABS account number: 100-254-9477  (preferable). The account name is “W.R. Clarke a/c Tree Society”. If you do make a deposit to CABS, please make sure your name is reflected as a reference, and also advise the Treasurer (wrc@mweb.co.zw) by email of the date of your deposit. 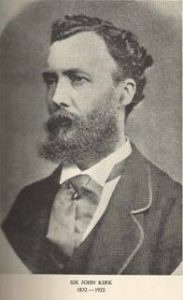 Etymology: The name Kirkia was given by Dr Daniel Oliver in honour of Sir John Kirk who collected the type specimen of this species near the Zambezi River in Mozambique. Sir John Kirk was the botanist who accompanied David Livingstone on his second expedition to the Zambezi, Victoria-Falls, Lake Nyasa, the Shire valley and the Rovuma river between 1858 and 1863. The name acuminata refers to the pointed shape of the leaflets.

In Zimbabwe, the Kirkiaceae family has only one representative, Kirkia acuminata. In Southern Africa there are only 3, acuminata being by far the most common.

Kirkia acuminata is a small to medium-sized tree 6-15 m high, with a rounded crown; it occurs in various types of woodland from medium to low altitude on rocky outcrops but is never dominant.

The leaves are compound, once pinnate with 6 to 8 pairs of leaflets plus the terminal one. The leaflets are narrowly ovate and acuminate. The margins are finely toothed, the petiolule is very short or absent but the petiole is long: 3 to 10 cm. The leaves tend to grow in clusters at the end of the branchlets.

The bark varies from smooth and grey when young to brown, vertically streaked when older and even flaky when old. The flowers are small white to greenish in many branched, loose heads growing in the axils of the leaves. 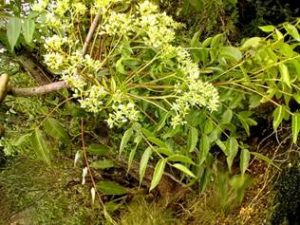 The abundance of flowers from October to December make a beautiful sight. The fruit is a tiny woody capsule splitting in 4 sections with one seed in each. The seeds germinate easily and the tree will also grow from truncheons. The tree grows best in sandy soils and grows relatively fast. It is drought resistant but should be protected from frost. The swollen roots store water for drought periods. In drought periods people and animal dig them to quench their thirst. 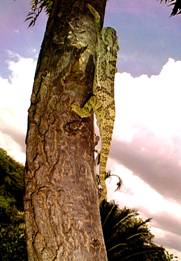 Unfortunately (or maybe fortunately) the wood contains silica crystals that blunts tools rapidly. It is neither very durable nor very resistant to insects and borers.

It nevertheless turns to a very nice fine polish. Medicinally, an infusion of the bark is taken by mouth as an emetic and for abdominal pains. A decoction of the roots is taken by mouth for cough and babies are washed with same to fatten them. The juice of the fruit is used on wounds and also applied to snake bites.

Our venue today was a new one. Southern Cross Farm lies within a meandering loop of the Mupfure River, not very far from the town of Chegutu.

Arriving a little bit late (well, this is the Tree Society after all), we were greeted by Graham and his wife and soon set off towards the banks of the nearby Mupfure. We had two guests with us, Bart and Petra Wursten, who have been visiting from Belgium and are working with Meg Coates Palgrave and myself on the online Flora of Zimbabwe.

The altitude of the Farm was 1170 m, relatively low, and the vegetation was generally miombo woodland, Brachystegia boehmii (mufuti), mixed in places with mopane. However, of course, our starting point in the rather muddy riverine vegetation was totally different.

Here evergreen trees and climbers and shade predominated, although as the riverine strip was quite narrow, they were mixed with more woodland, deciduous species. A fine Kigelia africana, the Sausage tree, bore its magnificent fruits. Meg pointed out an example of Diospyros kirkii, the Large-leaved jackal-berry.

Near the river we saw Tacazzea apiculata, the Crawcraw vine.  This is a woody climber with opposite leaves and milky sap, nowadays placed in the Asclepiadaceae, it was formerly in the family Periplocaceae. It’s a fairly common species in the right habitat, which is at medium and lower altitudes by rivers. The specific name ‘apiculata’ refers to the tip of the leaves which bears a narrow, sharp point.

Also present was Strychnos potatorum, the Grape strychnos. The English name is quite apt because of the small grape-like black fruits. Meg explained that although Strychnos gives rise to the name strychnine, it is an Indian and SE Asian species, Strychnos nux–vomica which is the main source of the drug. Our species are not necessarily poisonous and indeed the fruits of some species are well-known to contain very pleasantly edible flesh. Any poison is likely to be in the seeds, which are not usually broken up and eaten.

Meg mentioned that at one Tree Society outing in the past, Cheryl Haxen had eaten a fruit and had been sick for the rest of the day, but it was not known if the fruit was the cause.

Also present was the Potato-bush, Phyllanthus reticulatus, which gives such a characteristic smell to evenings by lowveld rivers. Meg mentioned that it had three types of branch: (a) green deciduous branches (which looked rather like compound leaves); (b) spur branches bearing stipules and (c) the main branches. The smell comes from the flowers and buds and the occurrence in the evening suggests that some night-time pollinator might be at work.

There were also some Mimusops zeyheri, Red milkwood, by the water. These are the trees that occur in the Great Enclosure at Great Zimbabwe. Also seen was a specimen of Dalbergia melanoxylon, the Blackwood Dalbergia or the Zebra-wood. The wood used to be used to make ashtrays in Chegutu and Graham reported that this still continued at the present time.

We also found Psychotria kirkii, a shrub in the Coffee family, Rubiaceae. The leaves have very distinct bacterial nodules which are easily seen by holding a leaf up to the light. Meg noted that the tree and the bacteria are ‘cosymbiotic’; neither can survive without the other. All growing tips and seeds contain the bacteria, thereby ensuring they are spread to each new generation of plant.

Climbing up the slope we emerged from the riverine into mufti woodland. Here were mostly common species, Azanza garckeana, Terminalia sericea, Julbernardia globiflora and Combretum zeyheri.

Also seen was Combretum fragrans, the Four-leaf Combretum, and Meg offered a beer to the first one to find a whorl of 4 leaves. After crossing a rather weedy field, the whole party moved to the front of the house and walked out along the main entrance road.

There was then a steady stream of finds until lunch when we returned to picnic by the river. Two interesting herbs were seen: Craterostigma pumilum (C. plantagineum, which was also there, is the commonest species of the genus) which has flowers, or in this case fruits, borne on long pedicels. Also present was a small suffrutex, Pachystigma pygmaeum, also Coffee family.

After lunch we decided to have a short walk on the way out and stopped in some nice miombo woodland by the entrance road. Here Liz Ade found two very interesting orchids. One was a tall Habenaria (galactantha possibly) and the other the leaves of Nervilia ballii. The leaves of the latter are broad with strong fan-like venation and are purple beneath; unlike most orchid genera, the species are most easily identified from the leaves.

All in all, it was a productive and enjoyable day.

I am, as always, very grateful to Meg Coates Palgrave for leading the walk. Thanks also to Graham and family for their friendly welcome. 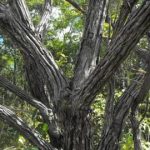 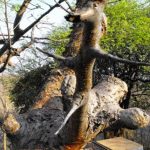