Sunday 20th July, (3rd Sunday): Visit to Imire Game Park, Hwedza: We will meet at the Mukuvisi Woodlands office at 8 a.m. on 20th to arrange lift-sharing, leaving at exactly 8.05 a.m.  Late-comers will have to make their own way there.  We meet at Imire at 9.30am. Please bring chairs, lunch and drinks as usual. There will be an entrance fee of $10 per person.

“Down Under” it might be called “Vachellia erioloba” but I will stick to the name “Acacia”, after all the first Acacia specimen (Acacia nilotica) was described by Carl Linnaeus in 1773 in Africa.

The Fabaceae are so numerous that they have been subdivided into Mimosoideae, Papilionoideae and Caesalpinoideae.  The Acacia fall into the Mimosoideae and in the Field Guide to the Acacias of Zimbabwe (Timberlake et al., 1999) 43 species are described. 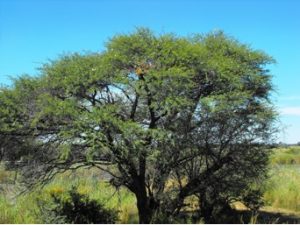 In this country Acacia erioloba only grows in the Western areas and its distribution more or less coincides with the distribution of Baikiaea plurijuga  (Rhodesian teak), Schinziophyton rautanenii (the Manketti tree) and  Guibourtia coleosperma (False Mopane), as they all thrive on Kalahari sand. The country of predilection of A. erioloba is however Namibia, where its growth pattern changes from that of a large tree in the North to a mere shrub in the South. It is a long-lived tree that can tolerate high summer heat as well as severe frost. 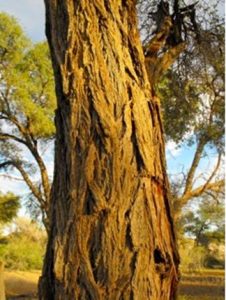 In Zimbabwe it ranges from 8 to 12 m in height. The trunk varies from reddish in younger specimens to dark and very fissured in older specimens.

The leaves are bipinnate, with 2 to 5 pinna and 8 to 15 leaflet pairs per pinna.  The leaflets are fairly large but do not overlap, they are blue-green in colour.  The inflorescence appears from late August to October, before the rains.  The flowers are globose, sweetly scented and bright golden in colour, very reminiscent of Acacia karroo but not so profuse.  They are solitary or borne in pairs along the twigs of the previous year.  The flower head is an aggregate of tiny individual petal-less flowers. 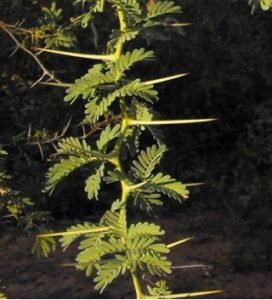 The thorns, paired at the nodes, are modified stipules; straight, white, large, robust and often inflated at the base.

The pods are large and woody. They are densely covered with short grey hair. They are indehiscent, the seeds being released after the pod rots on the ground or is eaten by elephants and other animals. The seeds pass unharmed through the digestive tract and are released far from the tree that bore them, complete with a good supply of manure. 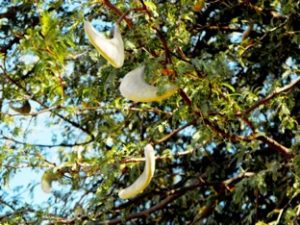 Acacia erioloba has many uses.  The pods are  useful  fodder  and  are  relished  by  wild animals. The wood is popular as firewood because it is slow burning and gives lots of heat. It is also used for fence poles, tools and implement handles but not much in carpentry as it needs tungsten-tipped tools to work it.

On the medicinal side the edible gum can be used to treat gonorrhoea, the pulverised bark to treat headaches and the dry powdered pods to treat ear infections.

Members of the Tree Society celebrated a lovely winter’s day with a visit to Pamuzinda Lodge, which is situated on the Serui River about 10 km off the Bulawayo road, 75 km west of Harare. The lodge is an attractive complex of thatched buildings set amongst beautifully manicured lawns and large indigenous trees in the middle of a 2500 ha game park. It overlooks a lagoon formed by damming the river with a weir.

The first sight to greet us was a six-month-old orphan giraffe on the lawn that was always ready to be fed and fondled by visitors. A very fat warthog of uncertain temperament named Spike also wanders around the grounds and apparently sleeps in the bar. There were 24 members and guests on the outing but only 18 set out to view the trees, led by Mark, who was ably assisted by Canaan, a resident guide. He is very knowledgeable on trees and was able to locate some of the less common species for us that we might otherwise have missed. Some of the walkers dropped out after a while, but those who persisted enjoyed nearly three hours of tree spotting in the lodge grounds, as well as down by the river and in the regenerating woodland between river and airstrip, to the accompaniment of the calls of the fish eagles that live by the river. I counted 53 tree species that we identified during the walk, out of the 97 recorded by Adrian Lind over a period of six years in the 1990s.

Pamuzinda is situated at 1190m, significantly lower than most of the places we visit near Harare. In fact Mary pointed out to us that it was on the edge of the Zambezi tsetse fly belt until rinderpest killed all the wild hosts of the fly in 1896. One of the striking features was the presence of extensive areas of mopane woodland, Colophospermum mopane, which is very uncommon closer to Harare. This tree is easily recognised by its bifoliolate leaves, resembling butterfly wings, with a minute vestigial leaflet between them, and its rough, ridged bark. It bears kidney-shaped beans, each containing a single seed with an attractive embossed surface. It is widely browsed by cattle and wildlife and is the host of the emperor moth, Imbrasia belina, the caterpillars of which are a delicacy, the popular mopane worms. 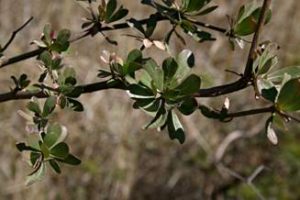 The most exciting find of the day was Terminalia randii, the Spiny Terminalia, which is rarely seen within reach of Harare; the distribution maps show it confined to the Midlands and Matabeleland with extensions into Botswana and up into Zambia. We examined a shrub and Canaan pointed out a larger tree in a thicket. The species is well-named for its very obvious branched spines, while the leaves are small, almost purple at this time of year, and grow in clusters on short branchlets. The fruit are small and typical of the genus.

Another species seen that is uncommon around Harare was Combretum imberbe, the Leadwood. This tree has a wide distribution in the northern parts of southern Africa, but excluding most of the Zimbabwe Highveld. We only saw one shrub, but it does grow into a large tree that has a characteristic “crocodile skin” cracked bark. The leaves are small, greyish green, with a silvery sheen, and grow on short, often spine-tipped twigs, and the fruit are small and typically four-winged. The tree gets its common name from the extreme weight and hardness of the timber.  Philenoptera violacea, the Rain Tree, which is also not often seen in the Harare area, was well represented and recognisable by its very stiff, imparipinnate leaves that have only one or two pairs of opposite leaflets. We also found two uncommon narrow-leaved shrubs in the river bed itself, Nuxia oppositifolia, the River Nuxia, obviously with opposite leaves, and Rhus (or Searsia) quartiniana, the River Rhus, with trifoliolate leaves. More common species of Combretum, Terminalia, Acacia (or Vachellia and Senegalia if you want to be up-to-date, but it’s always a source of dissension) and Rhus were well represented.

In mid-June one does not expect to find any trees in flower, but the riverine trees sported brilliant red crowns from the presence of the fruits of Pterolobium stellatum, the Redwing, which is a very thorny climber with feathery, bipinnate leaves. Pseudolachnostylis maprouneifolia, the Duiker berry, also provided splashes of red and yellow in the woodland as its leaves prepared to be shed. Some species were already leafless, notably Lannea and Commiphora spp, and were only tentatively identified from their stubby branches or their smooth bark respectively.

After the walk the party reassembled at the bar-side pool and were treated to a delicious buffet lunch on the verandah of the main building, with a daring vervet monkey in attendance to snap up unguarded bread rolls.

After lunch we were given a choice of a game drive or a canoe trip on the river. Most of the participants chose the game drive, which proved to be a great disappointment from the point of game viewing. Of the large and varied population in the park we saw only two lions in an enclosure, a few small groups of impala and zebra close to the road, and a distant wildebeest and its calf. However, it was a delightful meander through unspoiled woodland, a mosaic of mopane, miombo and terminalia obviously dictated by variations in soil type, and Canaan did point out some of the tree species that we had missed in the morning, though we didn’t stop to examine them

Some of those who took the canoeing option had a wonderful birding meander down the beautiful Serui River past the owner’s riverside lodge, hoping to find the rare African Finfoot, Podica senegalensis, with its very obvious orange feet. They had no luck with this special waterbird, though they did see more than their share of toppies and drongos, with a welcome woodland kingfisher thrown in.

The longer game drive resulted in our departing from Pamuzinda a little later than we would have wished and having to negotiate the undisciplined traffic in the western suburbs of Harare in the dark on the way home.  Not an experience to be repeated too often

We are all grateful to Isla for organising such an unusual outing, to Mark and Canaan for leading the walk, and to the staff of Pamuzinda for making us so comfortable. 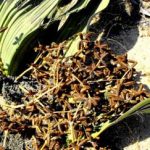 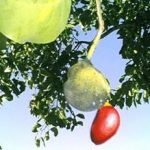