Sunday, September 20th: Visit to Christon Bank. A return visit to one of our regular venues. By this date, the trees in the bush should be coming alive and we hope to see some interesting species in flower.

Please bring a chair and lunch and we will meet in the car-park at 9.30 am.

Important note: There is now a toll gate between town and the turn-off to Christon Bank (before Eskbank Farm—18km from Harare, between the 17.5km peg and the 18.5km peg). The charge is US$1 for private cars, so US$2 will be needed in total.

Mfuti Lodge is the home of Peter and Anita Vorster, our kind hosts for the day, who welcomed us with a cup of tea. The lodge, a new venue for the Tree Society, is on the Cromlet Road near Arcturus, 4.5km west of the Mutoko Rd, 18km north of Harare. Fifteen people attended the outing.  Thanks to Mark, who was our leader for the day.

At an altitude of 1430m, Mfuti Lodge is an interesting place, lying in the transition zone between the highveld plateau around Harare and the warmer, lower altitude, mid reaches of the Umwindsi River, a tributary of the Mazowe River.  It is a hilly area.  The soils are light red, fine sandy or gravelly loam.  These soils are derived from Archean metasediments, mainly quartzites and jasperlites.  The miombo woodland is dominated by Brachystegia boehmii with lesser numbers of Brachystegia spiciformis and Julbernardia globiflora. Although B boehmii is not uncommon around Harare, nearly pure stands of B boehmii usually occur only in the warmer lower altitude area north of Harare.  No Brachystegia tamarindoides were observed, probably an indication that the well-grassed hillside is frequently burnt. Four species of Acacia were recorded in the woodland: A. amythethophylla, A. goetzei, A. polyacantha, and A. sieberiana. Most  A. amythethophylla, as is commonly seen, occurred as a scraggly shrub of 2 to 4 meters, but there was one particularly fine large specimen of an estimated height of 8 meters.  One large A. goetzei was laden with immature pods, and was exuding a clear transparent tasteless gum, very different from the rich brown bitter-tasting gum commonly seen on tannin rich A. karoo. In the past two subspecies of A. goetzei  were recognized, A. g. subsp goetsei and A. g. subsp microphylla, a small leaflet form. However it is now considered that there is only one species with variable sized leaflets. Here the leaflets were mostly small but some were medium-sized.  Most of the A. sieberiana seen were planted, but some were naturally seeded from the planted trees.

Perhaps the most exciting find of the day was Stereospermum kunthianum, the pink jacaranda.  This is often seen planted within Harare, but being a middle or lowveld tree, is seldom seen naturally close to Harare.  It will be well worth a revisit to see this in flowering time.  Three species of Albizia were recorded.  Two were ones frequently seen on our outings:  A. amara and A. antunesiana.  The third was several fine specimens of the less commonly seen A. versicolor. A number of indigenous, but apparently planted, trees were seen.  A small, young baobab, Adansonia digitata, was seen.  Considerable debate took place over leaf shape before it was finally concluded that it was in fact a baobab.  Euphorbia ingens, and probably Bauhinia tomentosa were noted.

Aloes  seen were A. chabaudii, A. christianii and A. excelsa.   Escapees  seen included Eucalypt and pinus species, and Toona ciliata.  These were numerous within the miombo woodland.

Do you want to make an environmentally responsible choice of plants for ornament, hedging, landscaping etc? Then consider the following guidelines in selecting species:

AVOID alien species that have fleshy fruits—many of the most troublesome invaders are spread by frugivorous birds, bats and other animals e.g. lantana, mulberry, guavas, privets, bugweed, syringa, prickly pears, queen of the night cactus, firethorns, cotoneasters, eglantine rose, brambles, ginger-lilies. Australian brush-cherry (Syzygium paniculatum is often sold as a ’good bird plant’ – and is on its way to becoming invasive!)

AVOID alien grasses—which are among the most invasive species in the world. Many spread prolifically from seed, underground stems (rhizomes) and runners (stolons). Fountain grass (Pennisteum setaceum), for example, is becoming increasingly invasive.

AVOID alien climbers—which have a devastating effect by smothering the native vegetation; they are extremely difficult to control. English Ivy (Hedera helix) provides one good example.   Cat’s claw (Macfadyena unguis-cati) is another.

Avoid alien succulents—some of which have become the most costly and troublesome invasive species in the region, e.g. sour prickly pear (Opuntia stricta). Cacti are ALL alien in southern Africa (with the exception of a single small epiphytic forest species of Rhipsalis). The alien cacti are often confused with the indigenous euphorbias—don’t be fooled into purchasing a cactus that has been incorrectly labelled as euphorbia. Cacti have spines arising from specialized structures called areoles and the spines usually occur in clusters; they do not have a milky latex like the euphorbias. Agaves or American “aloes” with their tall flowering poles should not be confused with indigenous Aloe species with their showy, orange, red or yellow flowers.

Cultivars are OK because they can only be reproduced by cuttings, tissue culture etc. WRONG!—many cultivars e.g. variegated forms are able to reproduce by seed and their progeny revert to the original form, e.g. Chinese wax-leaved privet (Ligustrum lucidum) (there are two forms: normal and variegated). Queen of the night (Cereus jamacaru) has a monstrous form that sets seed which develops into the normal form.

The creeping, yellow Lantana cultivar Sundancer is marketed as “Lantana montevidensis”, “sterile” and “non-invasive”, however studies in South Africa and Australia indicate that it is partly L. camara, only sterile if planted in isolation, and inter-fertile with L. camara. Research in America indicates that a very similar cultivar, Goldrush, is probably a hybrid derived from the invasive Lantana camara complex and North American Lantana depressa. While there is no evidence that Sundancer and other yellow-flowered creeping lantanas are invasive, they are probably harmful in a much more subtle way—by swapping genes with the invasive lantana and adding the genes of L. depressa and possibly other Lantana species to the gene pool of the invasive, alien lantana complex, almost certainly increasing its genetic heterogeneity, hybrid vigour, resistance to biocontrol agents, invasiveness and suppression of indigenous biodiversity.

Plants with only one sex present are OK because they can’t produce seed. WRONG! — purple pampas grass (Cortaderia jubata), for example, can produce seed without pollination (apomictic reproduction)

Reproduced (with minor editing) in the interests of science from SAPIA NEWS No. 10, January 2009. 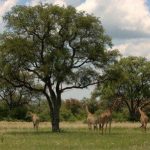