Saturday 4th August. There will be no Botanic Garden Walk this month as Tom is away in Europe.

Sunday 19th August. This month we are spending the day in the Mukuvisi Woodland, using the Blatherwick Road entrance.

Saturday 25th August. This will be at one of our favourite stamping grounds, namely Greystone Park Nature Reserve. Meeting time: 2.30 p.m.

The outing was well attended, and it was a cool cloudless day. Ngoma Kurira is one of the dominant hills of the Domboshawa area, about 30km north of Harare. It is a granite hilly area lying in the head waters of the Mazoe River. The soils are reddish, coarse and sandy, recently formed, with little clay or organic content. These soils were very deep at the base of the hill, getting shallower and more rocky as we climbed, and almost completely absent at the higher levels. The relatively flat land lying between the hills is fairly densely populated, and most of the original trees have been cut out, leaving mostly the fruiting trees Uapaca kirkiana and Parinari curatellifolia. Although the hills are relatively well-forested still, commercial and domestic woodcutting is taking an increasing toll on the trees.

On the hill itself, as we climbed to the saddle, and then crossed the bare granite to t  he stream, we passed through three distinct zones: Hillside zone. This zone itself was in three separate subzones. At the base, a subzone dominated by Uapaca kirkiana, in the middle a subzone dominated by Julbernardia globiflora, at the top a subzone dominated by Brachystegia tamarindoides, the well-known, but re/renamed, mountain acacia. The mountain acacia usually grows on hill tops, or in rocky areas. With its thin bark and its vulnerable root system growing near the surface, often in leaf mould, the mountain acacia is very vulnerable to bush fires, and hence tends to favour rocky areas where fires seldom reach. Two subspecies of Syzygium guineense were seen. Here on the hillside, it was the common subspecies guineense. A notable feature of the day,  was that not one specimen of Brachystegia spiciformis was seen. Bare granite zone. Plants growing in the very little soil that collects here in the cracks and crevices are very seldom burnt, and here exists one of the unique flora zones in Zimbabwe. Many herbs are endemic to this small area. An eastern highlands special Erythroxylum emarginatum with its unusual crackly leaves was exciting. Securidaca longipedunculata, the tree violet, was full of its pinky winged seeds. These seeds change to a straw colour when they are ripe and are ready for wind dispersal. This tree is highly poisonous … particularly its roots, which are used for inducing abortions, or for ritual suicide. A fine large specimen of Peltophorum africanum was nearby. Riverine. In this type of very rocky area, one of the few places where soil collects is in the steep valleys where the seasonal streams flow. Here the Syzygium guineense subsp. afromontanum was gloriously in flower. Another interesting tree was a Englerophytum magalismontanum, the stamvrug, or stem fruit, with branches full of the light brown bosses, which had borne the edible fruit after which the tree is named

The whole area was rich in different varieties of trees, as detailed in the alphabetical list below:

Trees as habitats: The South African wild almond – Part 2
[Ed: Part 1 began the account of other species associated with the wild almond tree, Brabejum stellatifolium. This part continues the story.]

So why are there two Setapion species on Brabejum? Clues may come from ecological differences between the species. It may be that S. provinciale, seasonal and dependent on flowerheads, appeared where the climate was seasonal and wild almond trees flowered profusely. Conversely, S. quantillum may have developed in some small Brabejum population where seasons were poorly marked and flowering unreliable. This would imply that, at some point in the past, the wild almond species was split between two populations, each carrying its own weevil load. The trees can live for hundreds of years, and this separation may have been barely a few generations long. If there was any genetic divergence between the tree populations, molecular work may be necessary to prove it. On the other hand, the tiny weevils can have at least one generation every year. By the time the two weevil populations could meet again, they would no longer recognise each other as conspecifics, and, filling in different niches on the plant, were able to live together side by side.

Such separate populations of the tree exist today on the main Cape Fold Mountain Range, on the Cape Peninsula and on the Piketberg in South Africa. These populations are large enough to sustain massive populations of both weevils. Thus, a real bottleneck in the tree population was probably necessary to allow the weevils to speciate. In fact, an interesting point can be made about the population size of Setapion quantillum. It may sound unlikely that this species, possibly the most abundant of all weevils in the south-western Cape, is associated with a relict plant like Brabejum. But nature has its ways of compensating. The range of the tree is limited, barely 200 km x 100 km. But it’s a fairly abundant and large tree, offering lots of food for those insects able to digest it, especially if small. On the average Brabejum branch, with four or five leaf whorls, bearing six leaves each, there will be nine or so weevils. Most trees have between 50 and 300 branches. One kilometre of stream may well have 10 to 200 trees, and there are maybe some one thousand kilometres of stream that are Brabejum habitat. So the total population of adult weevils at any given time may be somewhere between a few million and a few hundred million — recently enough we humans weren’t many more than that.

So how does the tree feel about all these tiny associates chewing away at its leaves, stems, and flower buds? It’s difficult to say without proper quantification. While it’s unlikely that any of them could cause tree mortality, they certainly consume a part of the products the tree would rather save for itself. At Kirstenbosch, where wild almond trees are now, due to the activities of man, more abundant than anywhere else, the weevil population is truly at home and in control of the situation. So much so, that the trees barely find the strength to produce any fruit. Just a few kilometres away, where trees are more distant from one another, weevils are rare and fruit production as good as anywhere.

One of the fungus species (Phyllosticta), similarly to the weevils, appears to have a bad effect on cultivated plants.

There are also animals that benefit wild almond trees. Brabejum is insect pollinated, but it does not appear to depend on a single pollinator species. Instead, any generalist, like bees or beetles, will do the job.

And seed dispersal? Brabejum is primarily water-dispersed. It may be, however, that upstream dispersal is occasionally rodent-assisted, although no obvious indigenous candidates come to mind. Alien grey squirrels though do seem to give it a try now and then.

Speaking of aliens: although Brabejum is an abundant, even locally dominant species along streams in the Cape, it’s not alien invasion-proof Throughout the lower-altitude parts of its range, Brabejum is being replaced by a variety of invaders. At the eastern end of its distribution, Australian acacias already make it difficult to find any wild almonds at all. Often, entirely new communities, with gums, oaks, Spanish reed, dominate the river banks where wild almonds once ruled. We have no idea how this may affect the associated insects. It may be that some, restricted to the lowlands in the past, are already gone. It may also be that aliens are limiting them to places where Brabejum itself is more at risk from insects, mites, and fungi. The Brabejum ark, though, has managed to stay afloat for so many million years, carrying its heterogeneous load of creatures.

REAFFORESTATION IN ETHIOPIA: HAGENIA ABYSSINICA
[Ed: For decades, reafforestation efforts in Ethiopia were based heavily on the compulsory planting of Eucalypts. So unpopular were these attempts that they led to ‘peasant revolutions’, in which trees were planted … but with their roots in the air. Here is part 1 of a description of one of the indigenous species currently being used in the reafforestation effort for the Ethiopian new Millenium, when the calendar turns to 2000 on 11th September this year.]

Part 1
Hagenia abyssinica is a species of flowering plant native to the high-elevation regions of central and eastern Africa, with a disjunct distribution in the high mountains of East Africa from Sudan and Ethiopia in the north, through Kenya, Uganda, Rwanda, Burundi, the DRC, and Tanzania, to Malawi and Zambia in the south.

It is a slender tree up to 20m in height, with a short trunk, thick branches, and thick, peeling bark. The leaves are up to 40cm long, compound with 7-13 leaflets, each leaflet about 10cm long with a finely serrated margin, green above, silvery-haired below. The flowers are white to orange-buff or pinkish-red, produced in panicles 30-60cm long.

It is generally found from 2-3000m elevation, in areas receiving 1000-1500mm of rainfall annually. It can be found growing in mixed afromontane forest with Podocarpus, Afrocarpus, and other trees, and in drier afromontane forests and woodlands where Hagenia is dominant, or in mixed stands of Hagenia and Juniperus procera.

Hagenia is used as a food plant by the larvae of some Lepidoptera species, including the Turnip Moth.

Michel Laverdiere  To be continued 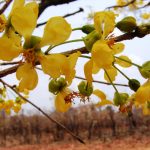 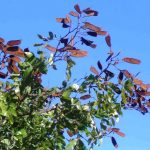