Saturday 3rd June: Botanic Garden Walk. Meet in the car park at 1045 hours for 1100 hours. We shall continue with FABACEAE in day light!

Sunday 18th June: This month we are pleased to be visiting the Chegutu area once again, this time to the new Clifton-Off-River Storage dam. For an introduction to some of what we hope to find read Ann Bianchi’s Chegutu notes on page 3 of Tree Life No. 110. An Express Motorways coach has been arranged and will depart from Monomatapa Car Park at 0800 hours. A security guard will look after left vehicles. Book with Joy Killian on 308398. Fare $26

On Sunday June 4th we go to Mabukuwene, where we hope to have a Tree Bingo. Meet there at 0830 hours.

On Sunday 6th August we go to find a Euphorbia confinalis area off the Figtree Road near Hendriks Pass, then to Silozwane. Meet at Grafotype, 81 Mafeking Road, opposite Merlin at 0830 hours.

On Sunday May 7th we went to Hobort Farm, Marula and had a very good day. We went down to the Big Weir on the Madzimbiki River and on to the Black Ox Pool. In all, there, and finally at the small dam, where we watched a Fish Eagle being “dive bombed”, we identified some 82 tree species, a surprising number for a low rain fall area. Among them were Acacia fleckii, A. galpinii, A. nigrescens, Albizia amara, A. antunesiana, many Aloe excelsa, Bauhinia thonningii, Bolusanthus speciosus, Brachylaena rotundata, Cassia abbreviata, Colophospermum mopane, patches only, 5 Combretum, mostly fruiting, C. apiculatum, C. collinum, many yet not often seen here, C. hereroense, C. imberbe, C. molle, Commiphora marlothii, C. mollis, C. mossambicensis, Croton gratissimus, Cussonia arborea, C. natalensis We assembled this day with members of the Pre History Society at a fairly late hour so that members could drive through the Game Park at a leisurely pace and have time to stop and observe any game that they might spot. Tsessebe, Wildebeeste, Zebra, Waterbuck and Impala were reported, but the White Rhino and Giraffe remained out of sight. Ostrich were also spotted. We elected to examine the trees along the Yellow Route (there was a Red Route as well at one time, but the signs are in disarray). The Yellow Route skirts the kopje by the Car Park and ends up at the lake shore before returning to the road but we did not get this far. Why did we not get far? Well there was so much to see and talk about on the way. Take, for instance, the Commiphoras. These were leafless, but a slash on the bark caused an exudation from the cut which established the Family (BURSERACEAE) and Genus. Whether it was the benign influence of the Pre History Society we shall never know, but we were whisked back in time to Biblical references to Myrrh and Frankincense and the Songs of Solomon, I don’t think we will ever look at a Commiphora in quite the same way again. A stand of Erythrococca trichogyne led us on to Rothmannia fischeri before we went back over the rocks to our starting point.

After lunch we had the pleasure of a talk by Val Botes of the Pre History Society on Rock Paintings in general and on those at Bushman’s Point in particular. This is the only known frieze to depict a tree being cut down. Three Bottlenose are also depicted here, along with several other vivid and interesting groups of humans and animals.

To round of the day we found Zanthoxylum capense growing near the frieze, its identity confirmed by the row of glands following the edge of the leaf and its distinct lemon smell. A leisurely drive back through the Game Park completed a lazy and interesting day.

This month we continued with the CAESALPINACEAE and started with some apparent misfits to this family. Cordyla africana (the wild mango) has flowers that are intermediate between the CAESALPINACEAE and MIMOSACEAE, somewhat resembling a robust Albizia flower. The bark is characteristically horizontally banded, and has conspicuous lenticels, and the leaves lack the strengthened petiole of the FABACEAE. It can be distinguished from Xanthocercis zambesiaca, by normally being single trunked, whereas the latter is usually multi stemmed (trunked) and has fewer leaflets. Both these species lack the characteristic legume pods and are thus considered anomalies. We then continued to Tamarindus indica, which has a fleshy fruit. This species has small leaflets which are similar to those of Brachystegia, but are more symmetrical. The new leaves also resemble those of Brachystegia, being red/pale green in colour. There is some doubt as to whether this species is indigenous or was introduced to Africa from India. Baikiaea plurijuga (the Zimbabwe teak) is a more ‘conventional’ member of the CAESALPINACEAE, found only in deep Kalahari sands. The leaflets are strictly opposite and symmetrical and are a striking blue/green colour with a broad stipule at the leaf base. The flowers are typically asymmetrical and a beautiful pink colour. After briefly admiring Tom’s Brachystegia allenii again, we moved on to Erythrophleum africanum, the judgement or ordeal tree. This is a component of the miombo woodlands on medium altitude granitic sands. The leaves vary from shiny to velvety and the bark is rough. Both the leaves and the roots have poisonous properties, and are traditionally used as an infusion mixed with the caster oil plant (Ricinus sp) to ward off witches. Its common name is derived from its use in trials by ordeal, where a suspect is given the infusion to drink. If it is vomited up, that person is considered innocent, however, if retained, the person is considered guilty and usually dies. This is thought to be caused by the secretion of adrenalin which relaxes the stomach muscles.

Peltophorum africanum is bipinnate, and superficially resembles Albizia, but it lacks the gland on the petiole, which is grooved. Flowers are yellow and borne in racemes. We then considered some of the species with ‘butterfly’ leaves beginning with Guibourtia coleosperma (the large false mopane). Despite its common name, this species can readily be distinguished from the true mopane (Colophospermum mopane), by its pink/liver coloured smooth bark and shiny leaves. C. mopane has a very rough bark, and leathery leaves, with all the veins arising from the leaf base. C. mopane characteristically grows in moisture stress areas, including sodic soils (near Beatrice) and lowveld and waterlogged soils.

A DELIGHTFUL DAY IN AYRSHIRE

The country of Ayr is said to be very beautiful, bordered on the west by the Firth of Clyde. Ayrshire ICA has a beauty of its own bordered on the east by the Great Dyke. In one respect, however, there is a more dramatic comparison – I doubt whether one would find 105 species of trees on one farm in Ayr. That is what we found on Gomo Estate.

The welcome extended by Ian and Margaret Barron to the small party of tree enthusiasts who gathered there, and the great pains taken to ensure that our day was a success, made it just that. Thank you, Ian and Margaret for everything (they even arranged a bit of coursing to round off the day).

Outstanding for me was a group of very large Apodytes dimidiata growing between two big rocks. I should imagine that the saplings had to fight their  way towards the light, and never lost the habit of growing. Also unusual was the great number of Crossopteryx febrifuga laden with fruit. This species seems determined to make a take over bid on certain parts of the Estate and may well succeed, judging by the vigorous growth displayed. We were also rewarded by discovering Olax dissitiflora, Antidesma venosum and surprised by finding Maytenus senegalensis flowering, somewhat early, we thought. Also noted flowering was Protea angolensis and Senna singueana, and characteristically, Cassia abbreviata was festooned with many very long pods. After a picnic lunch taken in a shady spot perched on benches made from planks and bales of hay Ian took us to a frieze of rock paintings, dominated by two large kudu painted red and white. The red was still vivid after all these centuries, but the white had faded leaving the kudu with spoon shaped muzzles and sawn off legs and only faint traces of white to show the original shape of both. A delightful day indeed, in Ayrshire.

NOTES FROM CHIKWENYA, ZAMBEZI VALLEY : The Acacia albida are now coming into full flower in cascades of pale lemon spikes. The parasitic ‘loranthus’ are still flowering and cast a carpet of fallen flowers on the ground below. The Diospyros senensis are fruiting with yellowing oval ‘acorns’ and the Friesodielsia obovata are still bearing their fruits that are like miniature sausages. Xanthocercis zambesiaca, the nyala berry, are still in leaf although the only fruits left are in the top of the canopy. In the jesse thicket and mopane woodland there is much evidence that autumn is seed time : Albizia harveyi – flat brown pods; Terminalia prunioides – deep maroon discs; Sterculia africana – a heavy crop of hairy ‘cups’ which have recently burst and scattered the seeds on the ground.

The leaves of Kirkia acuminata and the wooden banana, Entandrophragma caudatum are turning a vivid and eye-catching yellow and the Strophanthus kombe climbers are forming bright traceries of big yellowing leaves. The Cassia abbreviata are bare of leaf already but the old seed pods are still clinging on. The knob thorns, Acacia nigrescens, are beginning to drop their leaves. In contrast, the Crossopteryx febrifuga are pushing out some new shoots with the leaves at the ends of striking crimson. During this month the Boscia mossambicensis have burst into leaf and have started flowering. The Courbonia glauca are also flowering with their sprays of puffy pale lemon ‘pom poms’ complimenting the grey foliage.

EDITOR’S NOTE : For the uninitiated let me assure you that Chikwenya is a complete experience. I do not know of another area on the Rift Valley Floor that has so much in such a small area, they also have animals galore for the folk who are less interested in the real pleasures of the Valley. These notes show how varied the Valley is at any one point in time.

At the Mashonaland Hunters Association School’s camp near Chirundu there are no fruit on the Kigelia, Friesodielsia or baobabs, despite the excellent crop of flowers on the Kigelia. The baobabs and Friesodielsia are in fruit close to the escarpment as well as around A. camp. It is also interesting to note that all the plants in flower now are those that keep their leaves throughout the dry season. These include A. albida and members of the CAPPERACEAE, the Boscia and Courbonia mentioned above as well as B. angustifolia which is in full bloom on Chirundu Hill, filling the air with a heady scent. The CAPPERACEAE are protected by their high concentration of mustard oils and so are not heavily browsed by mammals although the young leaves are great favourites for many species of caterpillar. We found bushes of B. mossambicense and C. glauca that were practically defoliated of all their soft new leaves. Once these have hardened they are less susceptible to this pressure.

Elspeth brought in with her a branch with simple opposite leaves and evidence of interpetiolar stipules – obviously a member of the RUBIACEAE. It is a tree in the jesse and has a very straight, hard woody trunk. It has a distinct bud that is similar to Canthium lactescens and it has a resinous secretion (similar to Gardenia resiniflua). It appears to be Canthium burtii but I will confirm this with Bob Drummond who has only just returned from Botswana. 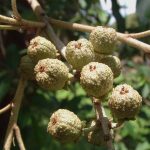 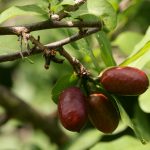