There are still a few subscriptions for the current year outstanding – sorry, but if you have not yet renewed your subscription this will be your last Tree Life.

HELP : Tom Muller is very anxious to obtain some ripe fruit of Ekbergia benguelensis.  If anyone can help, please forward them direct to the National Herbarium  or to any Committee member.

Sunday 18th September :  This month our outing is to Chabweno Farm, Enterprise.  There is a gentle whaleback kopje and high veld bush with some vlei and riverine as well.  Again no bus but please share lifts in own cars and meet at the venue at 1000hours.

On Sunday September 4th we go to Inyankhuni Dam. Meet at Ascot Car Park at 0830 hours cars are duly arranged.  This is a longish drive, a day trip. Bring lunch. Also on Sunday 11th we can join the Aloe and Cactus Society for an interest trip to Mangwe Pass, identifying the various Pioneer Forts on the way.  Those interested meet at Grafotype Factory, 81 Mafeking Road, (opposite Merlin Towels), where cars may be safely left.

On Sunday October 2nd we go to Mopani Farm, Mr. Acutt, this is mainly a Kalahari Sand area.  The turn off is just beyond that to the Airport.  It will be a shorter morning trip.  Meet at 0830 hours in the municipal car park by the City Hall. On Sunday, August 7th, we went to the Khami ruins area, a pleasant morning outing during which we identified about 50 species some not so common around Bulawayo, it being a micro-climate of its own, with good water.  No doubt this was a reason for the early settlement there.  We found some very fine Acacia galpinii, many already flowering seemingly a month early.  Acacia karroo, A. fleckii, A. rehmanniana, Aloe excelsa flowering well.  Azanza garckeana, Cassine transvaalensis, Clerodendrum glabrum, C. apiculatum was very small leaved.  We found Combretum hereroense, C. imberbe, leadwood and C. mollis, some very handsome in red leaf.  Euclea divinorum and E. natalensis were present, the latter taller than usual, about 8 meters.  Euphorbia cooper and E. ingens were there.  We found only one species of fig, Ficus abutilifolia (F. soldanella).  Grewia bicolour, G. flavescens, G. monticola, Kirkia acuminata,  some in fine red, new leaf, Maytenus senegalensis, Mundulea sericea, Pappea capensis plentiful Pavetta gardeniifolia, P. eylesii, Ptaeroxylon obliquum, sneezewood, a lot, Pterocarpus rotundifolius, widespread, Rhus lancea, R. leptodictya, three Turraea (two not often seen so near Bulawayo), Turraea fischeri (the Matopos honeysuckle), T. obtusifolia, fruiting and the commoner T. nilotica, Vangueria infausta and of course, Ziziphus mucronata.

A WALK IN THE RAIN FOREST

One of the must remarkable achievements in Tom Muller’s career must be his success in establishing a section of rain forest in the Highveld.  This is where we found ourselves on Saturday 6th August when we had our monthly visit to the Botanic Gardens. Trees in the rain forest seem to have individual characteristics.  One is that the absence of the threat of fire has led to many species having smooth bark, the fine protection offered by rough bark being unnecessary.  This was highlighted when we examined Vitex sp. No. 1 found in the Chirinda Forest, whose smooth grey bark was in complete contrast to that of our well known Vitex payos with its rough, striated bark.

Another characteristic is the propensity of many trees to bear their flowers on older wood, often on the main trunk.

Halleria lucida, Rothmannia urcelliformis and Aulacocalyx diervilleoides all displayed this habit.  Is it possible that this is an adaptation to suit the movement of insects living within the forest canopy, who would by gobbled up by birds if they ventured to the top of the canopy?  Pollination by such insects may be more certain if the flowers are lower down the trees.

We were introduced to Clausena anisata, gland-dotted and with a very strong smell reminiscent of aniseed which in itself points us to RUTACEAE, the Citrus family (remember Fagaropsis angolensis at the last outing?)  And which of us were aware that there is a genus that has deciduous branchlets?  On first acquaintance Phyllanthus inflatus has compound leaves, but this is not so.  Simple alternate leaves grow along this branchlet to give this appearance.  However, it’s not the individual leaves that fall when its drop time – it’s the complete branchlet.

How many of us would like a Filicium decipiens in our garden?  This fern like tree, whose compound leaves have a winged rachis, would grace any suburb.  The same could be said of Bridelia atroviridis, but hardly of Erythrophleum sauveolens  – getting to work in the morning is about as much ordeal as the ordinary citizen needs these days!

Our thanks to Tom for introducing us to species that we may, hopefully, be able to see in their original settings one day.

After some difficulties experienced by those arriving so early (the tree society signs were not yet ready  we all convened near the kopje chosen for its excellent frieze of Bushman paintings. We were introduced to its rock paintings by Mrs Peggy Izzett of the Pre History Society.  The frieze depicted amongst others, jackals with characteristic bushy tails, a marabou stork, an unknown plant, and excellent rendering of a hunter with quiver, bow and arrow, a giraffe head, an elephant, the head of a sable antelope in ochre, a fine head of a female kudu and a profusion of little white dots on the upper part of the frieze.  Tall, in vertical parallel lines suggesting rain.  Peggy told us that the superposition in a given area of many figures is actually believed to be related with magic and the harnessing of the force on forces permeating the visible world. To some specialists, the rows of little dots are the visual depiction of this (vital) force.  (May the Force be with you!)

From the terrace on which we stood at the foot of the frieze we had a view of the surrounding landscape.  In the West one could see very well the high flat level of the watershed made by the African geomorphological cycle while to the East the land opened in a very broad valley whose much lower level indicated that of the encroaching post African cycle.  For those of us interested in the geomorphology of Zimbabwe, the Geological Survey has just published a little book by Dr. Lister entitled “The erosional surfaces of Zimbabwe” it is number of the surveys publications and it reads like a poem.  In any case it is a key to the landscape we see on our outings.

After these preliminaries and under the enthusiastic guidance of Phil Haxen we proceeded to examine :Trees growing on the Kopje – and this is what we found : Combretum molle (rather unusual on a kopje)

On the lower fringe of the kopjie

And so, in two hours we had explored the kopje and its immediate surroundings.  We rested, chatted, had lunch and at 1400 hours we were off towards the nearby river. Away from the river and on two ant hills

A striking thing is that we met with six different Ficus, five of which grew within a radius of 150m from the centre of the kopje.  F. glumosa, F. natalensis, F. sur, F. thonningii, F. ingens and on the river F. verruculosa.

By now we were quite weary and returned to the cars.  The writer went and sat on a rocky shelf of the kopje visited in the morning and as the sun went down in the West the rock dassies came out for a late afternoon feed and were quite alarmed by his presence.  A lonely francolin uttered its harsh call.  The two nearest kopjes were still under the sun and were a mosaic of greys and reds.  It had been an interesting day spent with friends but was it the approaching night, the cooling atmosphere and the growing silence that made him reflect that a hundred years ago the land he was looking at had been covered by a continuous mantle of healthy woodland that was now broken open by agricultural land and would probably in another hundred years be completely cleared, gone forever.  Was it not alarming that only one francolin was calling when there ought to have been many more answering each other.  The landscape was no longer pristine.

By kind invitation of the farmer we decided to go out and camp at the foot of Dombawera, a hostile jumble of granite rocks which has the reputation of being the burial place of Mashona chiefs and is therefore not much visited by the local farm workers. After we had put up the tent, and the throbbing in my finger had died down – I had mistaken it for a tent peg, we went for a stroll and very quickly got the message that exciting times lay ahead.  Well, we found excitement in the discovery of Ekebergia capensis and Trema orientalis, both unusual as far as we are concerned and then a nice Afzelia quanzensis.

The next day we decided to climb Dombawera and our impression of hostility was confirmed.  Thick tangled scrub and sheer boulders ranked shoulder to shoulder mad us lose a lot of time looking for alternative routes. However, in the secluded hollows created by the enormous rocks grew patches of evergreen bush that reminded us of the Vumba. We collected Catha edulis in full flower, Erythroxylum emarginatum, Euclea crispa,  Olea  europaea var africana,  Stereospermum kunthianum plentiful and quite large we also acquired legs of rubber as a result of attempting to do what Sherpas do best!  We turned our back on Dombawera the next day and made our way across the edge of the lands past Uapaca kirkiana and Uapaca nitida growing side by side and Ormocarpum kirkii heavy with fruit.  Beyond the dam we skirted a benign kopje and were delighted to find a large grove of Croton gratissimus.  Leaving this, and descending to the vlei and stream bed we came upon a most astonishing grove of very large Ficus sycomorus groaning with fruit – many figs the size of billiard balls.  Equally large Acacia polyacantha, Syzygium cordatum and Rauvolfia caffra also formed part of this enchanted wood, which had an under story of wall to wall guava trees obviously spread by fruit eating birds that had come to have a go at the figs.  Time was now running out, so after a night during which we heard both hyena and bush baby announcing their presence we set off for a short walk along the fence and then parallel to the approach road to the farm.  Our ramble was made the more enjoyable by Catha edulis flowering all along the base of the kopje and by the scarlet chested sunbird feeding off the flowers of the very tall Leonotis nepetifolia that were growing there.  We collected Carissa edulis and Heteromorpha trifoliate and discovered the nest of a red-headed weaver low down on an Acacia.  Our well chosen lunch spot put us within touching distance of Diospyros kirkii, Euclea natalensis, Faurea saligna in flower, Ficus natalensis, Mimusops zeyheri and Pittosporum viridiflorum.

So much to see.  So much to do.  How lucky we are to have this on our doorstep. 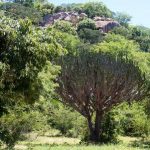 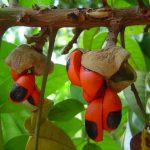